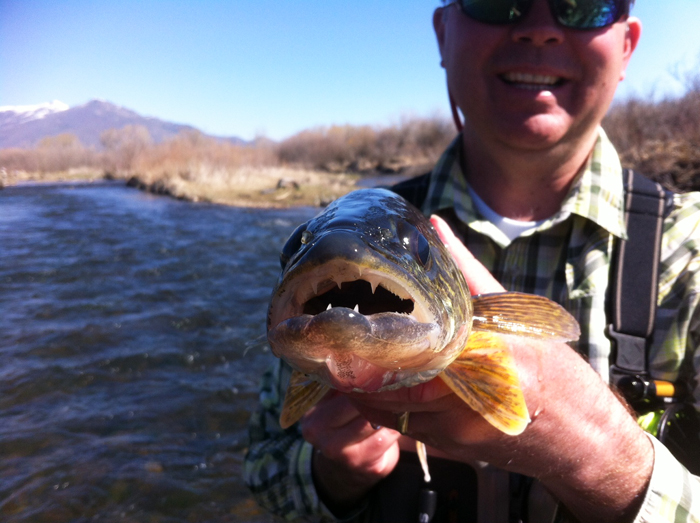 Those are teeth that any brown trout would be proud of.
Photo by Ryan Newman

The closest thing we have to a steelhead run on the Provo River is when the rainbows run out of Deer Creek Reservoir. Earlier this month, while fishing for said ‘bows with my new friend Russ, we happened to land something special.

After landing several healthy rainbows, we landed two browns in a row, and Russ mentioned how different the browns fought. On the next cast, Russ howled for help. He said he’d hooked a nice brown based on the way it was fighting. The fish flopped, and I saw its tail and said “That’s no brown.” In fact, it was a 20-inch walleye that had also run up into the river.

So, okay, it’s not a trout. But a 20-inch fish still puts up a good fight.
Photo by Ryan Newman

We were very surprised and excited to land such a unique fish…oh and we landed some great rainbows too!

Ryan Newman has been guiding for Rocky Mountain Outfitters—in Heber City, Utah—for more than a dozen years. In the off season, he teaches U.S. History and coaches high school football.