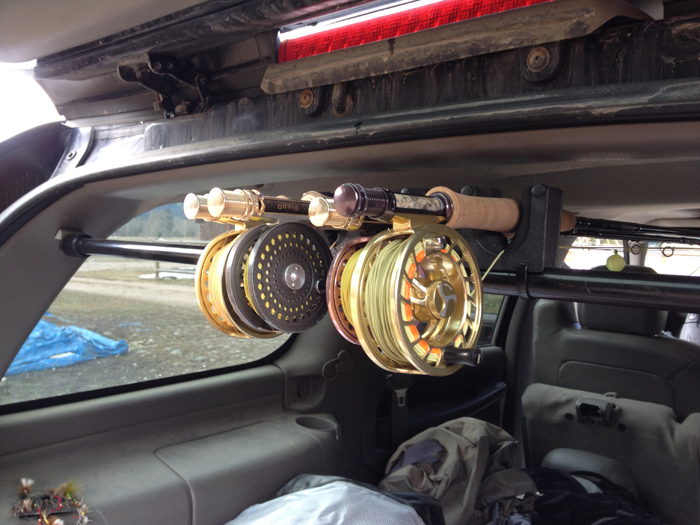 The armory was well stocked for a float trip.
All photos by Phil Monahan

Day Two in Montana for the 2014 Orvis Guide Rendezvous dawned bright and cold on Rock Creek, where I was staying with my friends Tim and Lisa Savard. Although he had missed out on the previous day’s adventure on Upper Rock Creek, Tim was up for a float trip. The only question was where? After lots of hemming and hawing, we decided on the Bitterroot River, which we’d heard good reports about. So we loaded up the Tahoe and hitched up the trailer. 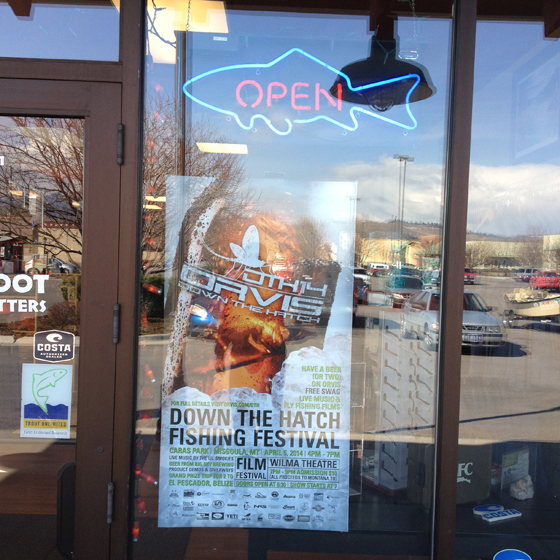 It was good to see that BRO was rocking the DTH poster in the window.

Our first stop was Blackfoot River Outfitters in Missoula, on account of I needed to pick op some Skwala dry flies. We don’t have that bug back East, so I wanted to get the best local imitations. Of course, you can’t just run into a fly shop and run back out. Some breeze must be shot. So we chatted up Matthew behind the counter for advice before we got on our way. We figured that the river would have a lot of traffic on such a nice day, so we were in no hurry, hoping to be well behind the main flotilla. 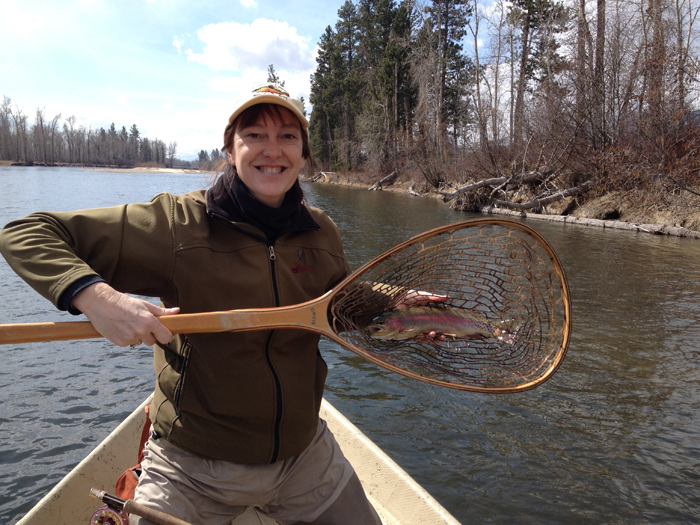 Lisa, of course, hooked up first. She’s obviously on a hot streak.

Tim took to the oars, so Lisa and I could fish. After nymphing for most of the previous day, I had decided that I was going to dedicate myself to bringing a fish to the surface, so I tied on one of my new Skwalas. Lisa went with a double nymph rig, pairing a Double Bead Black Stonefly with a Power Worm. Guess who struck first? Lisa had the first fish within a few minutes, while I continued to pound the banks with my dry to no avail.

The weather was bizarre, as it often is in the mountains. We went from sunny and warm to snowing and frigid, from dead calm to howling wind several times over the next few hours. Lisa landed a couple more trout, and then she switched with Tim. And damned if he didn’t catch a trout on a dry fly in his first half hour. It was at that point that I realized perhaps it was not to be my day. 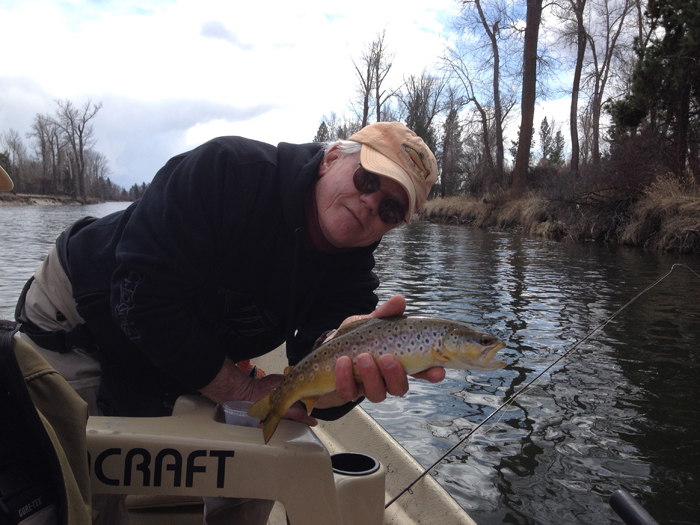 Tim shows off one of only two trout landed on dry flies on the day.

Finally, late in the day, we came upon a pod of rising fish, and Tim anchored the boat. We could see some blue-winged olives on the water, so I added a size 18 olive dry as a dropper off the Skwala. It took me a couple casts to figure out the competing currents, but then I was on it. As I dropped my third cast upstream of a riser, Tim said, “Oh, he’s yours.” And sure enough, the trout took. I set the hook, and. . .nothing. My flies came back. I turned to Tim and Lisa to see if I had done something wrong, and they just shrugged.

I laid another cast in front of a closer fish, and it smacked the Skwala. Again, I didn’t connect. After this happened a third time, Lisa said, “Do you have a hook?” So I stripped in to check my flies, but nothing looked amiss.

Over the next twenty minutes, six or seven fish struck my flies, but I didn’t stick one of them. I tried setting faster, I tried waiting longer, but nothing made a difference. At one point, my friend John Way—who owns The Tackle Shop in Ennis, Montana—was drifting right behind us as I missed a take from a big cutthroat. Now I had to endure ridicule, as well as frustration. Great. 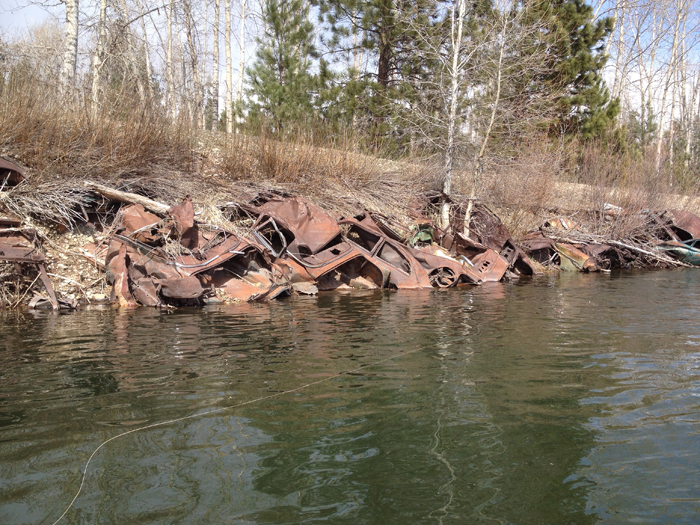 By the end of the day, my shoulder was as broken down as these fine, old autos.

When it was all over, with no more risers, I just stood there in the bow of the boat. Sure, I was frustrated, but I was also exhilarated. After a day of fruitlessly plying the banks, it was so cool to work a real pod of feeding fish. And I had gotten them to eat, which meant I was doing something right. Why I couldn’t hook one of them remains a mystery, but that short window of opportunity made the entire day for me.