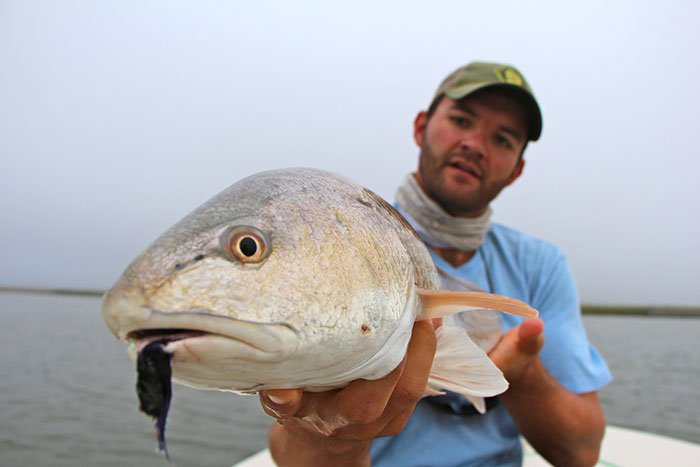 Nick shows off his first redfish on a fly, a 33-inch beast.
All photos by Capt. Owen Plair, Bay Street Outfitters

Every day I spend on the water with anglers is a a special memory for me, especially when they are new to the world of sight-fishing for redfish on fly here in the Lowcountry of Beaufort, South Carolina. Back in September, I spent a few days with some newlyweds who not only planned their engagement from catching redfish on fly but also their honeymoon! Before they arrived, I was informed that Nick had proposed to Sara by giver her an Orvis Helios2 8-weight inscribed with “Will You Marry Me” and a wedding ring in a fly box. [See photos of the fly rod and the proposal here.—Ed] Of course, Sara said “yes,” and soon after her response was, “Really? The rod is mine? We are going redfishing?” Long story short, Sara had always wanted to catch redfish on a fly, and Nick had planned it all out—not only spending their life together, but sealing the deal with a redfish honeymoon to make all her dreams come true. 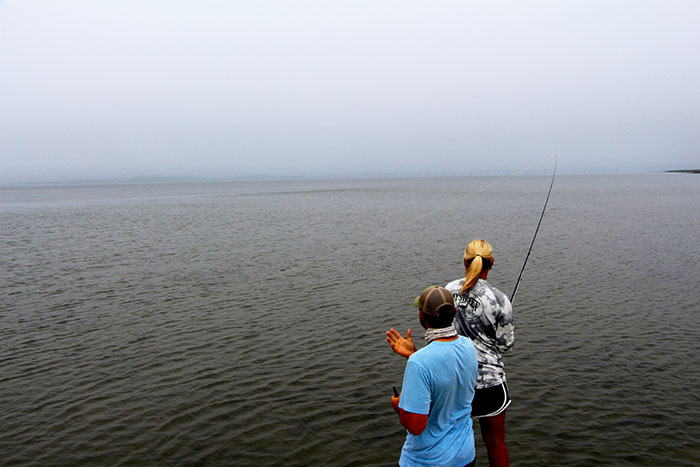 The couple worked as a team after Sara hooked up.

They soon arrived, all the way from South Dakota, with the unmatched excitement of being newlyweds and the goal of catching their first redfish. As we left the dock that morning in a thick fog and calm conditions, and it was time to make Sara’s dream come true. When we arrived at the first flat of the day, I rigged the “Will You Marry Me?” Helios2, gave them the breakdown of the “bow clock,” and started the hunt for redfish on the low tide. In a matter of minutes, we found a school of fish tailing in mere inches of water, backs out, flashing, and giving Nick the perfect shot. Sure enough, he made the cast, strip, strip, strip, and BAM! He was hooked up on his first redfish of the day. After a ten-minute fight, which went all the way to backing, we all realized that Nick had hooked a trophy 33-inch, 12-pound redfish! 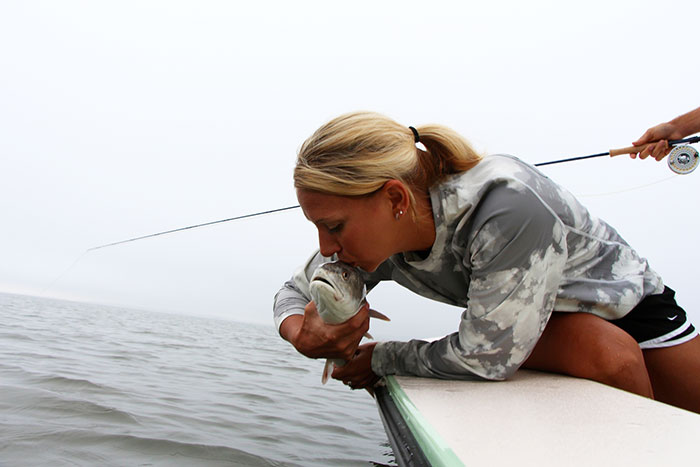 A redfish on a fly was a dream come true for Sara, and she was appropriately grateful.

As I was landing Nick’s massive fish, Sara had gone completely silent and seemed to be in utter shock with excitement. With a big smile on my face, I passed the fish to Nick and realized how special this moment was when I looked over at Sara and saw tears rolling down her face. These are the moments that I live for as a guide, and it was only 30 minutes into our day! After a few photos, we released the fish, and it was Sara’s turn to seal the deal. Moments later, we were back on the fish, and sure enough, Sara made the cast, strip, strip, strip, and she was on! Sara cleared the line like a pro and she was tight to her first redfish. As I was standing on the back of the boat watching Sara fight her redfish and Nick helping her, it was clear to me that this was a special couple. They worked as a team, and soon Sara had landed her first redfish, too. 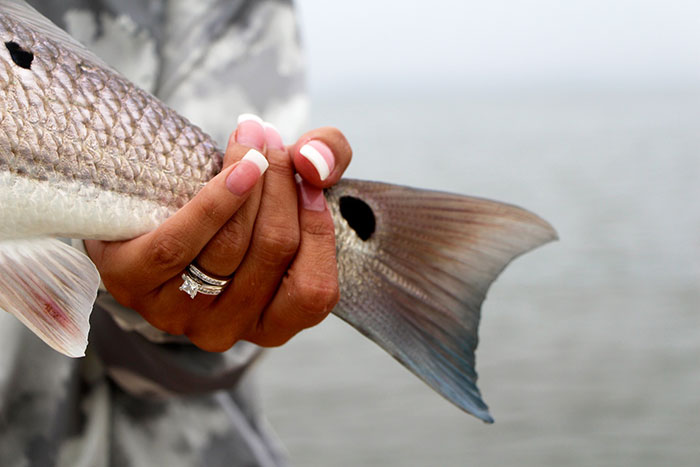 The engagement ring was the genesis of this redfish adventure for the couple.

For me, fly fishing is about the experience and memories that last a lifetime. As I watched Sara release her first redfish, all I could do was smile with the shear joy of knowing that we had just made her dream come true. I’ve been a full time Orvis-endorsed guide here at Bay Street Outfitters since I was 18 years old. Over the past six years—including a full season of guiding on the Ponoi River in Russia for Atlantic Salmon—this was by far my all-time favorite memory as a guide! After two days of fishing with this couple, it was clear they were meant to be together. After landing their fair share of redfish during the two days, it was time to switch it up a bit and move on to some bigger fish. We decided to fish for big jacks at the end of day two, and sure enough, another amazing memory was made. 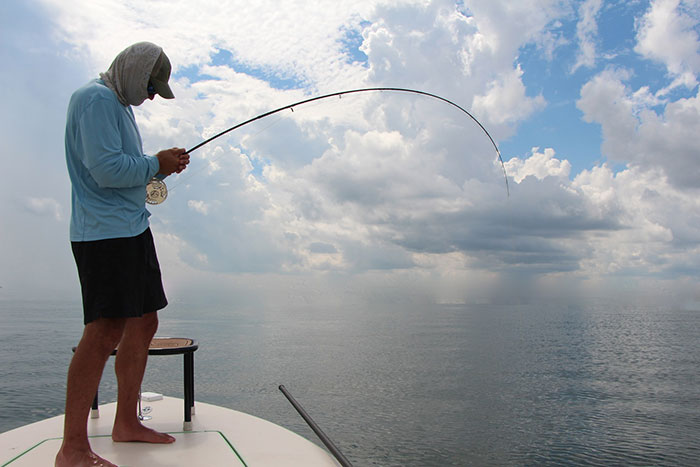 Nick puts a bend in the Helios 2 8-weight that was his gift to Sara.

We ran over to one of my secret spots to sight-cast to big schools of jacks cruising around in open water along the ocean. Sure enough, as we pulled up and found the birds, there they were! Four to five schools showing their backs, fins, and tails cruising in calm water just waiting to see a fly. After a few really good shots, we finally got one on the end of an Orvis 11-weight! It was an amazing eat and a 45-minute battle! It was great to see them experience the power of a big jack and what its like to have a large saltwater species on fly. 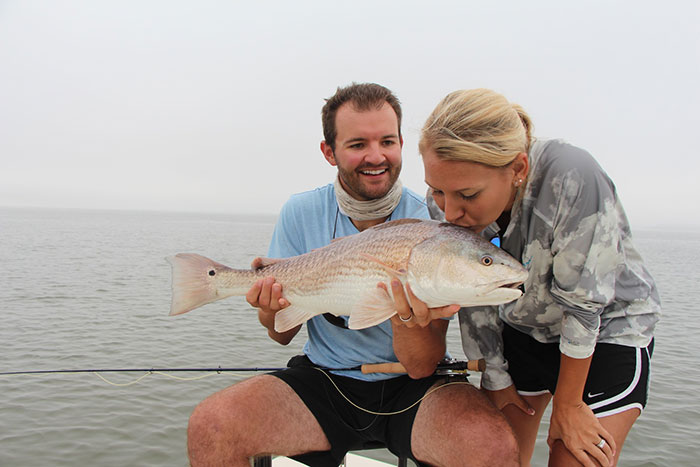 There was clearly a lot of love in the boat.

Over all it ended up being an absolutely amazing two days with this couple sharing my home waters here in the Lowcountry. Thank you Nick and Sara for one of my all-time favorite memories as a guide, and I can’t wait to have you back on the bow again soon. 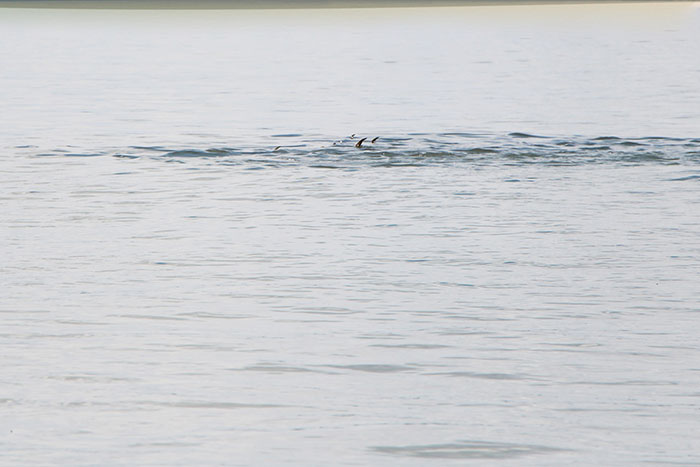 Things finished up when they found schools of cruising jacks.