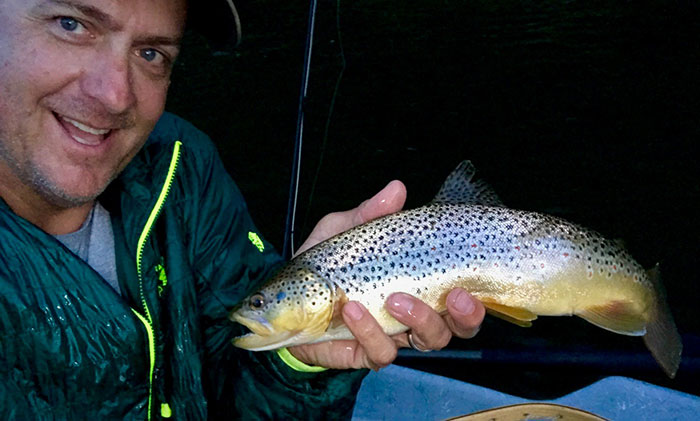 It took him awhile to relearn the skills of his youth, but the author finished his day on a streak.
Photo by Gordon Churchill

Let me start by stating that I basically learned to fish on the Delaware River. No, I’m not counting the stocked streams and the lakes I fished closer to my father’s home north of Syracuse, New York. I’m talking about real fishing, to tough fish that demand precise casting and every other kind of hard thing that fly fishing requires. I also don’t count the rock-hopping and pocket water of the higher elevation streams in the Adirondacks. Even though I could not do it anymore because my knees say no, I was pretty good at it once. 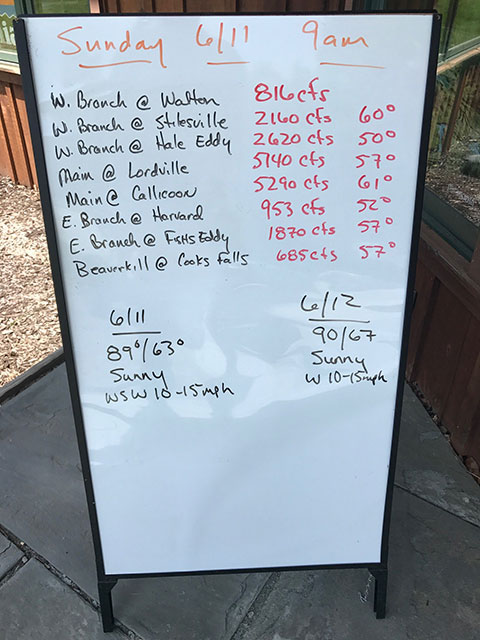 Those are insect-hatching water temperatures, which means dry flies!
Photo by Gordon Churchill

I’m talking about long casts to visibly feeding, easily spooked fish that need you to put the fly in a precise location. I was once told that if you can catch fish on the Delaware, you can catch them anywhere. While that may not be exactly true, the skills that get you fish on this river are useful across many applications. For instance, flats fishing: See that bonefish? You gotta drop the fly in front of him and cut him off without many false casts, in the wind, and know when the fish eats. See that redfish tailing in the grass? Same thing. Busting false albacore? You gotta get it out there with minimal false casting and drop it right in the bucket where the fish are feeding. These are all skills honed on the flat waters of the Delaware system. It had been many years since I’d fished there before 6/11/17 (which is how I’m referring to it), and there are many other needed skills that had fallen fallow, as I was to find out. 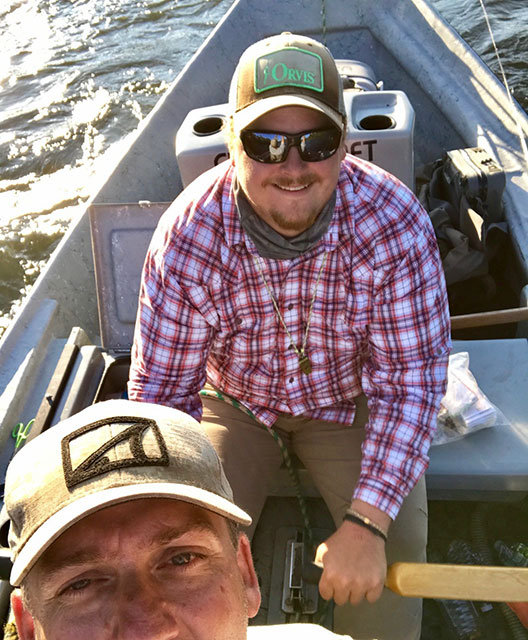 Ryan Furtak, at the oars, played the role of coach and cheerleader all day.
Photo by Gordon Churchill

I got hooked up with Ryan Furtak, of CrossCurrent Guide Service, through Joe Demalderis. I was going to be taking my daughter to visit her grandfather and wanted to get on the river for one day. Joe was booked and said Ryan could take me. Super. I only wanted to fish dry flies. Ryan said that would happen but we’d streamer fish on the way down the river. I wasn’t excited since I streamer fish all the time, but I had an open mind.

My first impression was that Ryan was a big dude! I’m over 6 feet and weigh about 240 now. Ryan is bigger than me, with a smile and a handshake to match. He put the boat in and we got started. No flies were hatching and no fish were visibly feeding. After tossing dries to the banks for a while, I could see that was going to be fruitless so I tried the streamer. Ryan had a great articulated alewife pattern that I knew would be a winner. It took me a minute to get the feel for the sink-tip line, but after a couple suggestions from Ryan, I was flinging it to the bank. I had one fish that looked quite large chase it to the boat before turning away. Another hit midstream that I just missed. Then I got it right behind a logjam and Ryan just knew there’d be a fish there, “Strip, strip, strip…” Bam. First fish. A sweet, 17-inch piece of butter. 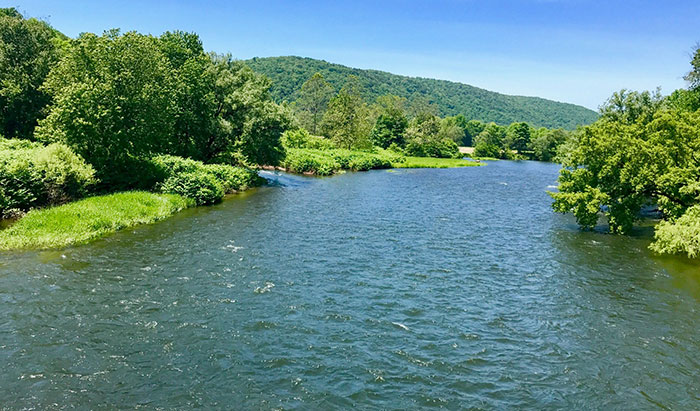 It was a glorious day to be on such a beautiful river.
Photo by Gordon Churchill

We had a few laughs, as it seemed to me that Ryan knew the fish was there before I even started the retrieve. “Did you see the fish in there?” I asked. “No,” he laughed, “It just seemed like a good fishy spot.” The man knows his fishy spots.

We got on down the river and mayflies started to appear. Ryan set us up on a good spot. Here is where my long fallow skills needed some coaxing. The fish were rising to sulfur emergers, and Ryan had the perfect fly for me. I covered a rise, the fish came up, and I just plain missed him. Then it happened again, and again. Again? Yup. The whole time, Ryan kept coaching me with his calm demeanor and upbeat approach. It did a lot to keep me focused. 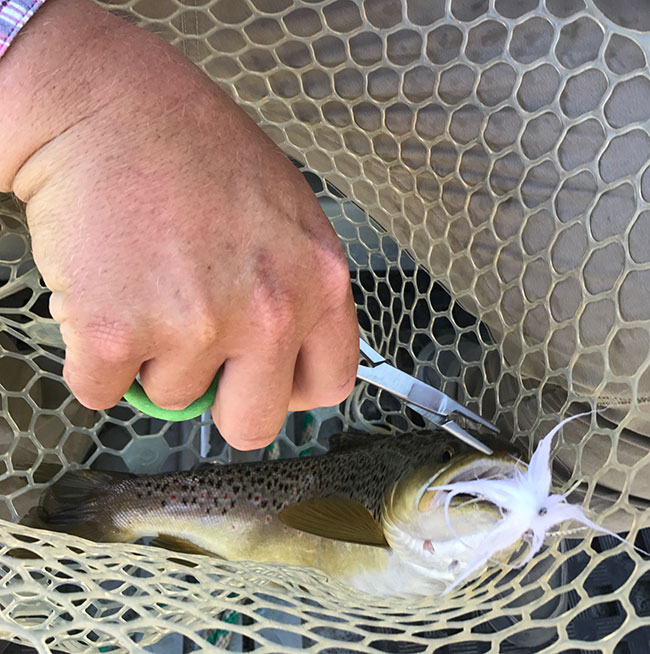 The first fish of the day ate an alewife imitation.
Photo by Gordon Churchill

We came to a stretch of river where we were going to finish out the evening. I missed another bite but actually felt it for a second this time. Then Ryan spotted a soft rise against the bank next to a rock. I dropped the dry fly in there, the fish slurped it, and this time I had the timing right and was redeemed for my previous failures. Again we had some laughs and some photos and I got my confidence back and proceeded to hook three more fish, one of which got off after a couple of salmonesque leaps. The other two made it in the boat. I had finally got it all together and even hooked one in the dark on a big old White Fly. Needless to say, I had a great time and thanks to Ryan’s great coaching, I was able to put it all together. 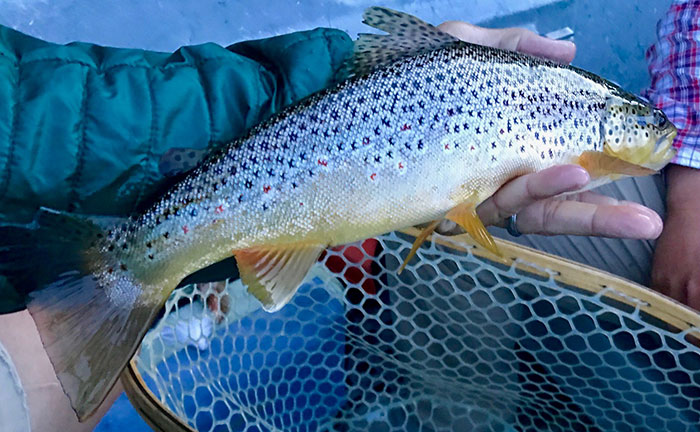 When the dry-fly fishing started, the author couldn’t put it together, but then something clicked.
Photo by Gordon Churchill

Saltwater fly fishing skills will take you pretty far on a flat-surface, tailwater trout river, but there are still some other things that you just have to get the feel for. Namely, how to set the hook when that big brownie rolls up on your fly, having just the right feel for those jumps, and seeing your fly on the water. (Yeah that was a problem, too.) But remember the most important thing: “This game is fun. So have fun.” (Crash Davis, 1988).