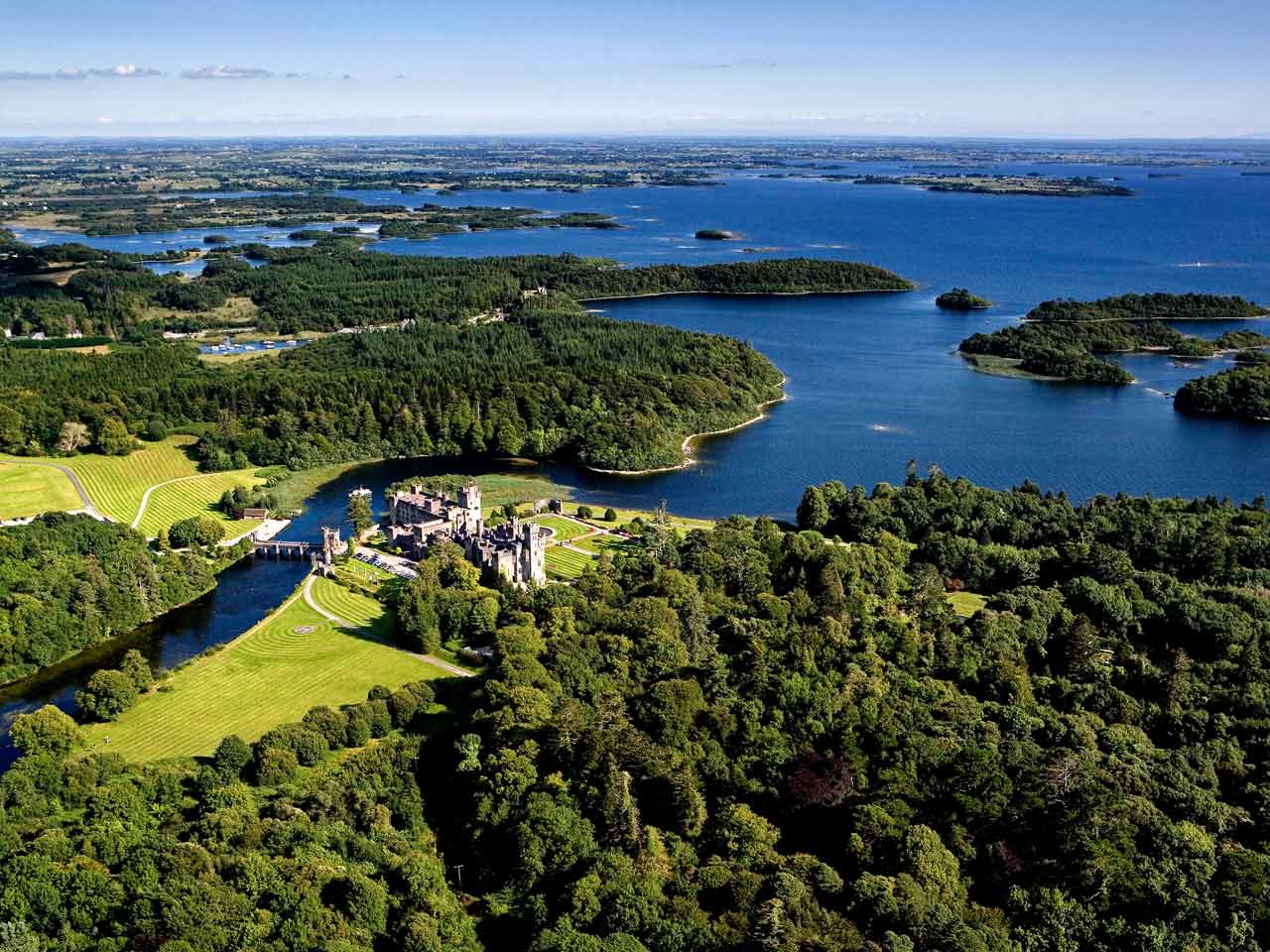 Situated at the mouth of the Cong River, where it enters Lough Corrib, Ashford catle is like a fly fisher’s dream.
Photo courtesy Ashford Castle

Last week, my wife, Mary Beth, and I finally took a long-planned-for vacation in Ireland, the land of our forefathers. Of course, one can’t return to the Auld Sod without wetting a line, right? Although I had just a few hours on the water, it was a memorable experience in many ways. 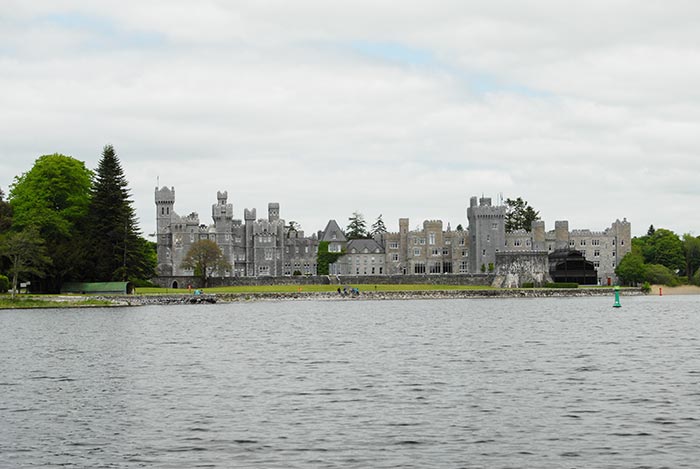 Our first stop was Ashford Castle, an incredible place built originally in 1228. The current estate is the legacy of the Guinness family (yes, that Guinness), who owned the property from 1852 to 1939, when it became a first-class hotel. Over the years since, the building has doubled in size, making it a remarkable combination of the ancient and modern. Located at the mouth of the Cong River, where it enters Lough Corrib, the castle is well situated for the fly fisher. 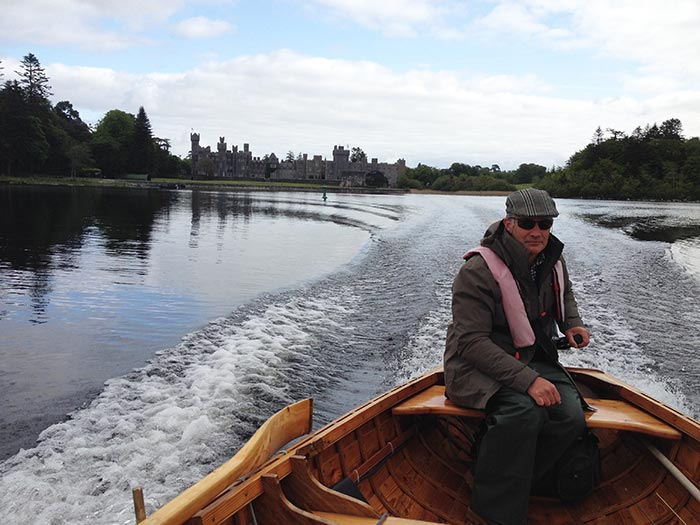 Guide Frank Costello guides his boat toward his favorite islands in search of brown trout.

On the morning of our second day, I met guide—er, I mean ghillie—Frank Costello at the docks below the stone bridge that spans the Cong. We hopped into his gorgeous, 19-foot wooden boat and headed out to a rocky shoal near an island. The famed mayfly of the British Isles (Ephemera Danica) had been coming off sporadically, and Frank hoped we’d see a decent hatch. But first, we started casting wet flies on a tandem rig. Frank’s set-up features the dropper tied to a long tag end of the blood knot above the tippet, and he prefers a pretty fast retrieve. While nothing was happening, I had a chance to talk with Frank about how he became a guide. 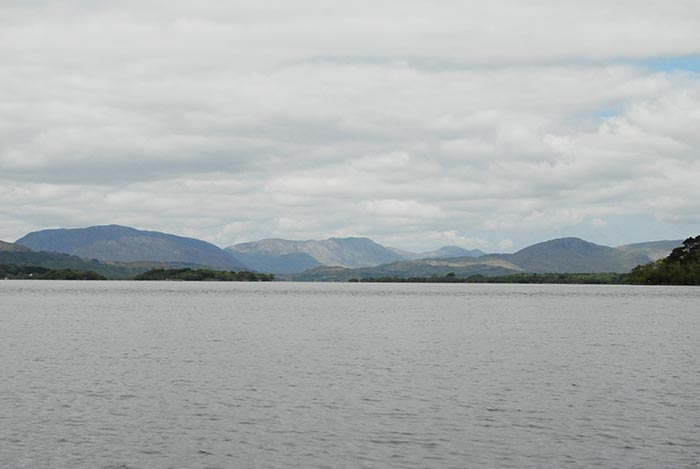 The Maumturk Mountains of Connemara dominate the western view.

It turns out that Frank’s family is pretty much synonymous with fishing at Ashford Castle. He is in his twenty-fourth year as a guide there, and his father ran the guiding business from 1939-1974. So you could argue that fishing Lough Corrib is in Frank’s blood. When I asked Frank what he does during the off-season, he replied, “I build these boats.” The 19-footer was a real beauty, featuring fine woodwork and a simple design that’s great for fly fishing, with few things to get your line caught on. 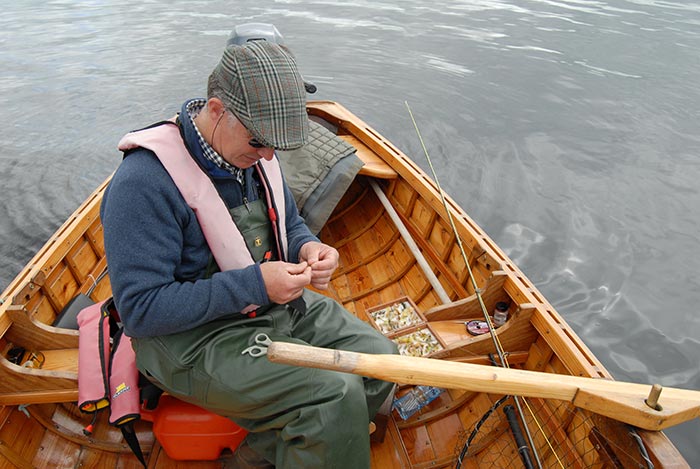 Frank ties up a tandem rig of wet flies, as we wait for the hatch of mayflies. 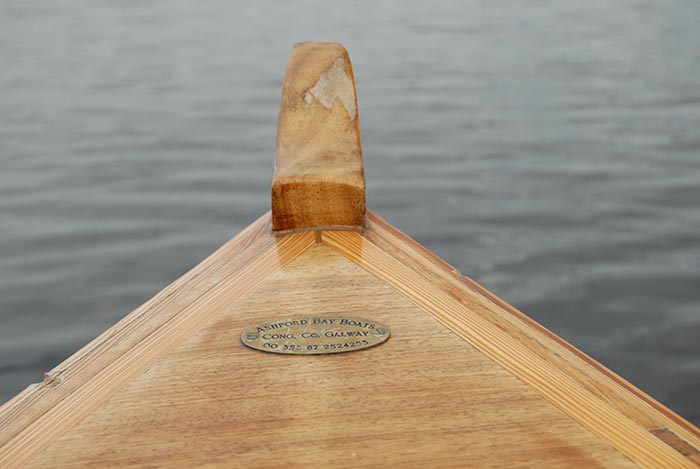 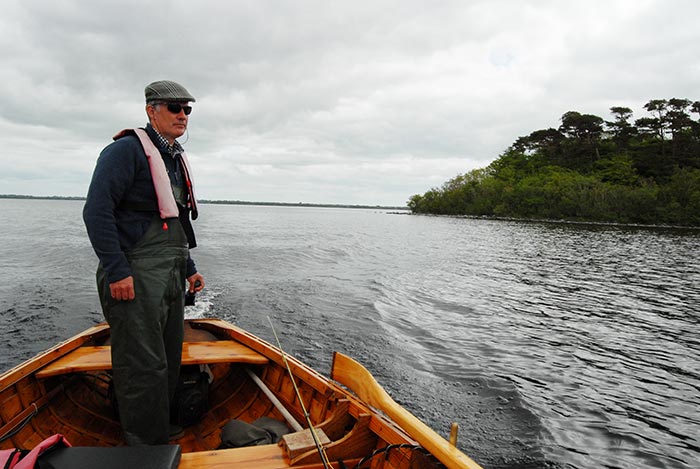 Our search for hatching mayflies took us to several different island shoals.

The lake holds a good population of native browns, pike in the weedy bays, and Atlantic salmon come in later in the season. Because there are more than 1,000 islands on Lough Corrib, there is plenty of shallow water to fish over. I could imagine how great the experience could be during a strong hatch of bugs, but we saw just a few of the big mayflies during our time on the water. 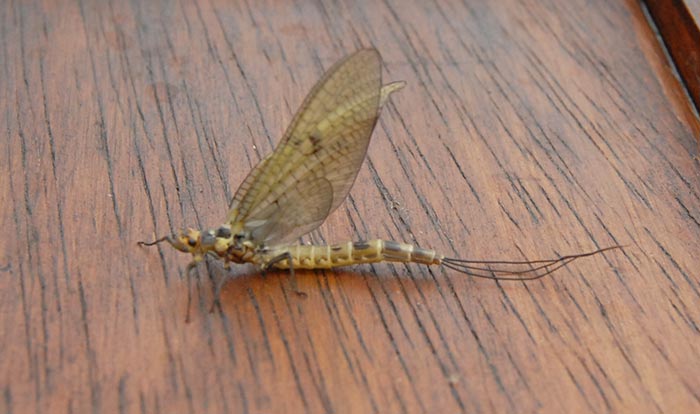 The famed Mayfly of the region hatches from late may through early June.

The trip back to the castle was worth the price of admission, as we cruised across the calm lake toward the historic building. The setting is simply stunning, with the mountains to the west, the looming stone manor to the north, and lush green landscape to the east. 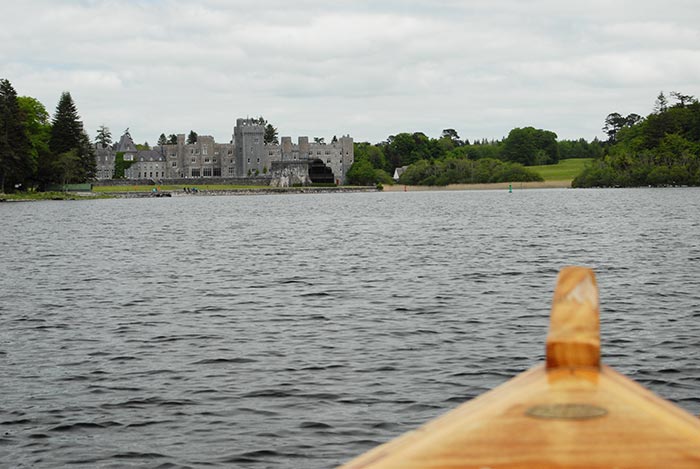 The water approach to the castle is breathtaking.

Even on a cloudy day, Ashford Castle is impressive. 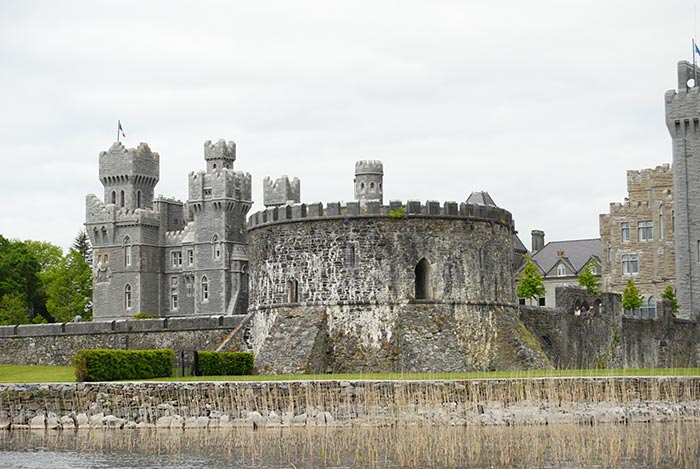 In this shot you can see the mix of ancient and modern construction that makes up the castle.

Although we didn’t catch a brown during the short three-hour session I spent with Frank, I found a real beauty the next day at the National Museum of Ireland’s Natural History building in Dublin. I’m not too sure that the taxidermist was an angler, though, based on the proportions he came up with. I can’t wait to return to Ireland to put in some real time on the water. The planning has already begun. . . . 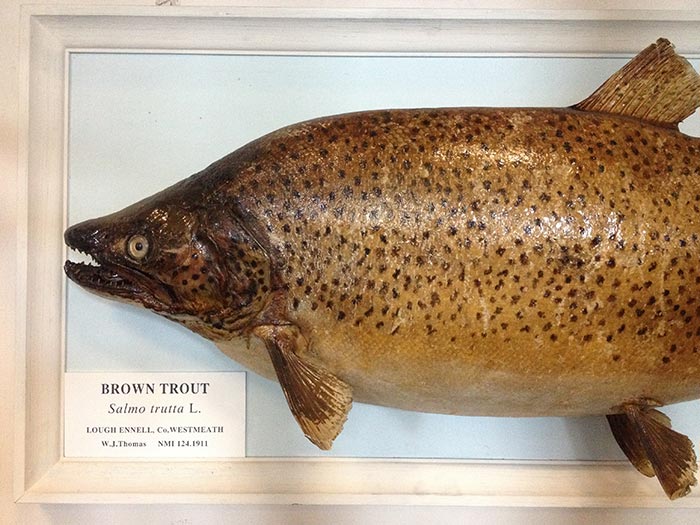 This brown trout mount seems to reflect a state of obesity normally found in hatcheries.

For information about a trip to Ashford Castle, contact Jeremy Kehrein at Orvis Travel.

2 thoughts on “Photos: Steeped in History on an Irish Lough”