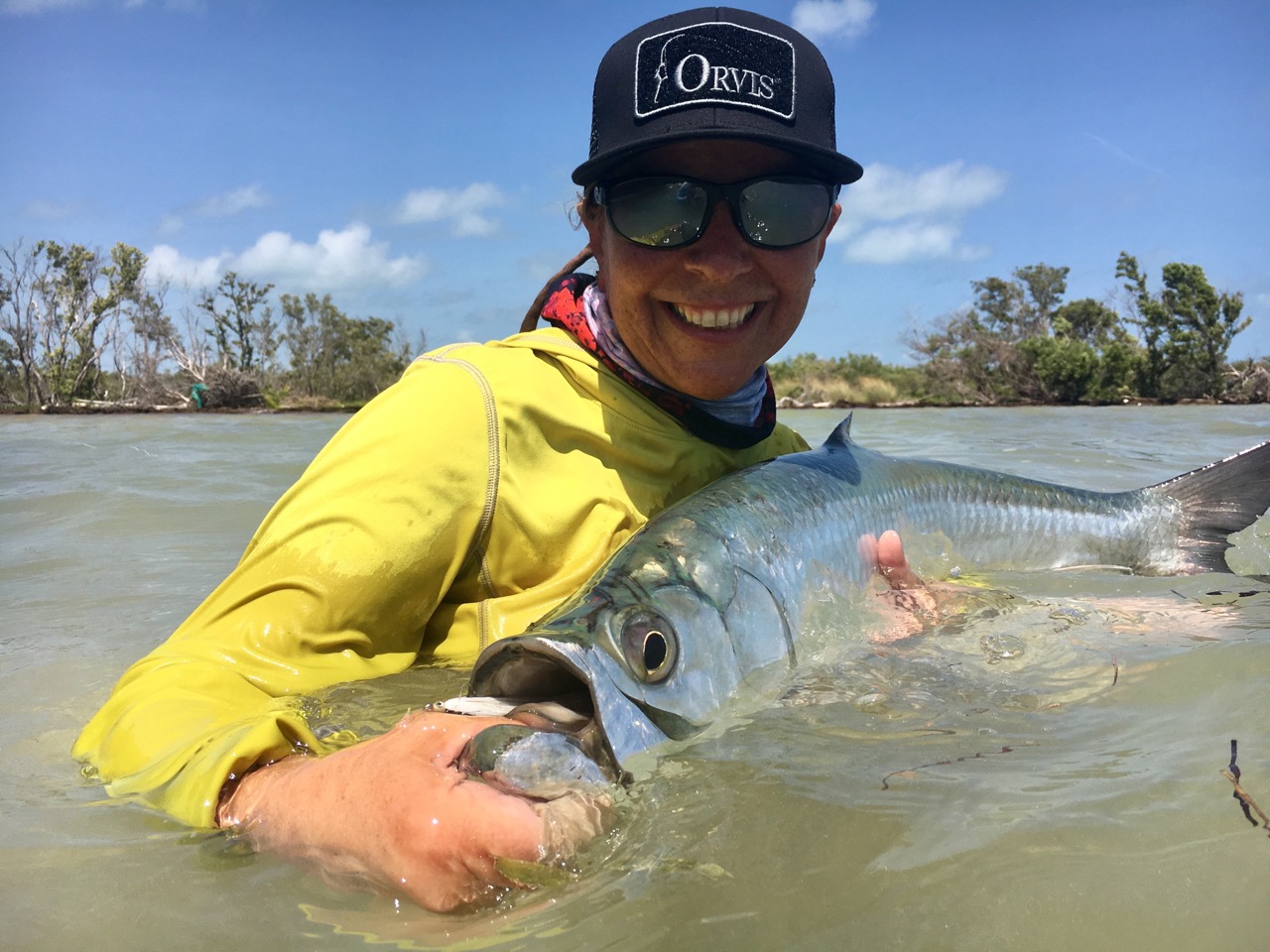 Cynthia is all smiles after achieving her dream of landing a tarpon on the fly.
Photos courtesy Cynthia Harkness

In September, I hosted a fantastic group of female anglers on a fly-fishing adventure to El Pescador, in Belize, through Orvis Travel. It was a trip of many firsts:

At 5 a.m. one morning, my guide asked me what I wanted to do that day, and I told him that I wanted to catch tarpon. I had cast to them the day before, focusing on a spot in the mangroves, where we kept seeing tarpon in the 20-inch rolling and cruising by. I eventually hooked one, but after a few jumps, the tippet snapped. So with a new day, I wanted a bigger challenge. My guide, Caesar, sort of half smiled, and said, “Ok, We will go South.” 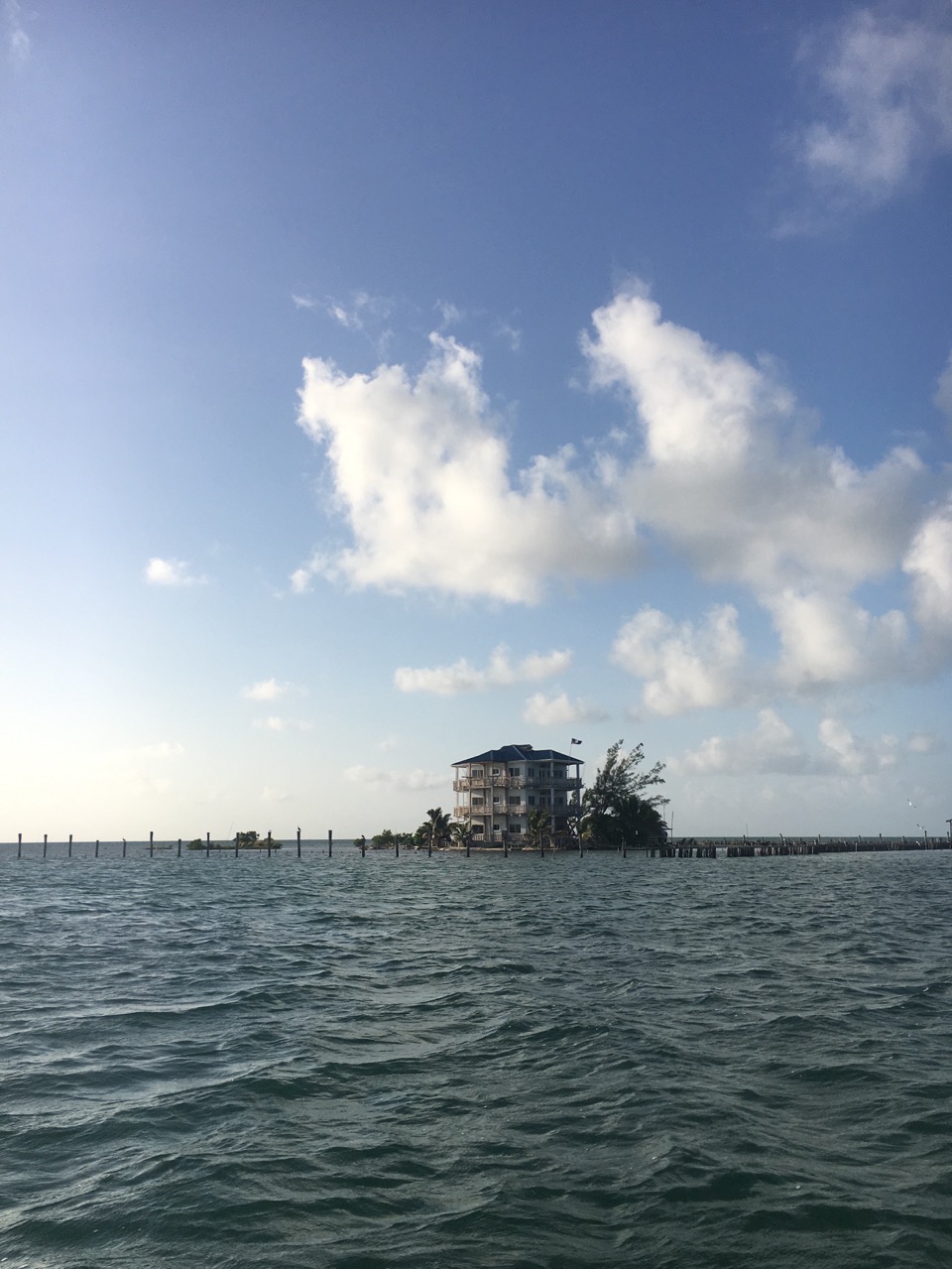 The only land visible during the long boat ride was this lonely house on a remote caye.

An hour plus into the ride deep into the Caribbean, I was starting to get a little bit worried. The only structure I saw after we left the safety of the lodge was a lonely house in the middle of the flats. It did have a flag flying over it. My buff, hat, and coffee were all secured, and I knew we would stop at some point, so I just sat back and enjoyed the ride. About an hour and a half later, I saw our destination: a cove on a lonely key.

Then the humbling started. I had to get in position, strip off 75 feet of fly line, hold the fly in my hand, and show Caesar my best cast. At this point, all my confidence started to crumble. But he came right up to the bow of the panga to demonstrate his cast, and for sure, that made me feel better. NOT. His cast was like a smooth, well oiled machine. It seemed as if, with an effortless wave of his hand, he could find that sweet spot where the rod does all the work. After his coaching, and a reminder to stop mending (trout reflex 101), my casting was humming. Not like his, mind you, but enough for him to say, “That’s good, yes, that’s it.” Never underestimate the value of a few good encouraging words.

Behind me, a pod of dolphins was jumping. I was in the Caribbean waiting to cast to tarpon, watching dolphins swim around me. Pinch me, was it real? And at that moment, I heard the boulder splash down, startling me, and that’s when Caesar casually said, “Fifty fee, ten o’clock. Go!” 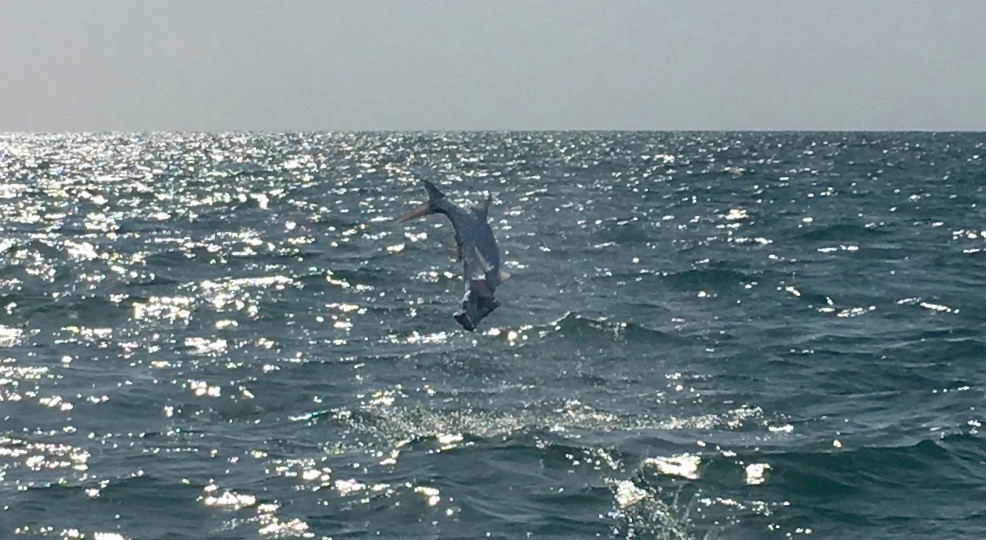 Few things get the adrenaline pumping like the tarpon on the end of your line taking to the air.

On my first or second or third cast, I got the fly to the splash down area, and Caesar told me to make long strips. The fish ate, and my hook set was quick, too quick. Casar reminded to put my hips into it, something I certainly didn’t have to do with trout or stripers. Then the fish began to run, and I had a crazy moment of getting the line on the reel–while keeping the line tight, staying low, keeping the rod tip low, watching the jumps, and listening to Caesar. It all came together, and for about an hour, it was a surreal slice of fly fishing that I had never experienced before.

During the fight, Caesar watched the fish’s every movement and jump. He showed me how to make crazy ninja bow downs in order to keep the fish on. And then he jumped off the Panga! Why? I needed him! His plan was to grab the leader and land the tarpon once it got in that magic zone near the boat. He had poled the boat into shallow water for this very reason. The first time he got the leader, the huge tarpon just took off again, zinggggggg! There went all my work, so it was back to the reel, back to the “little out, little in” tarpon dance again. This happened a few more times, and I was exhausted. 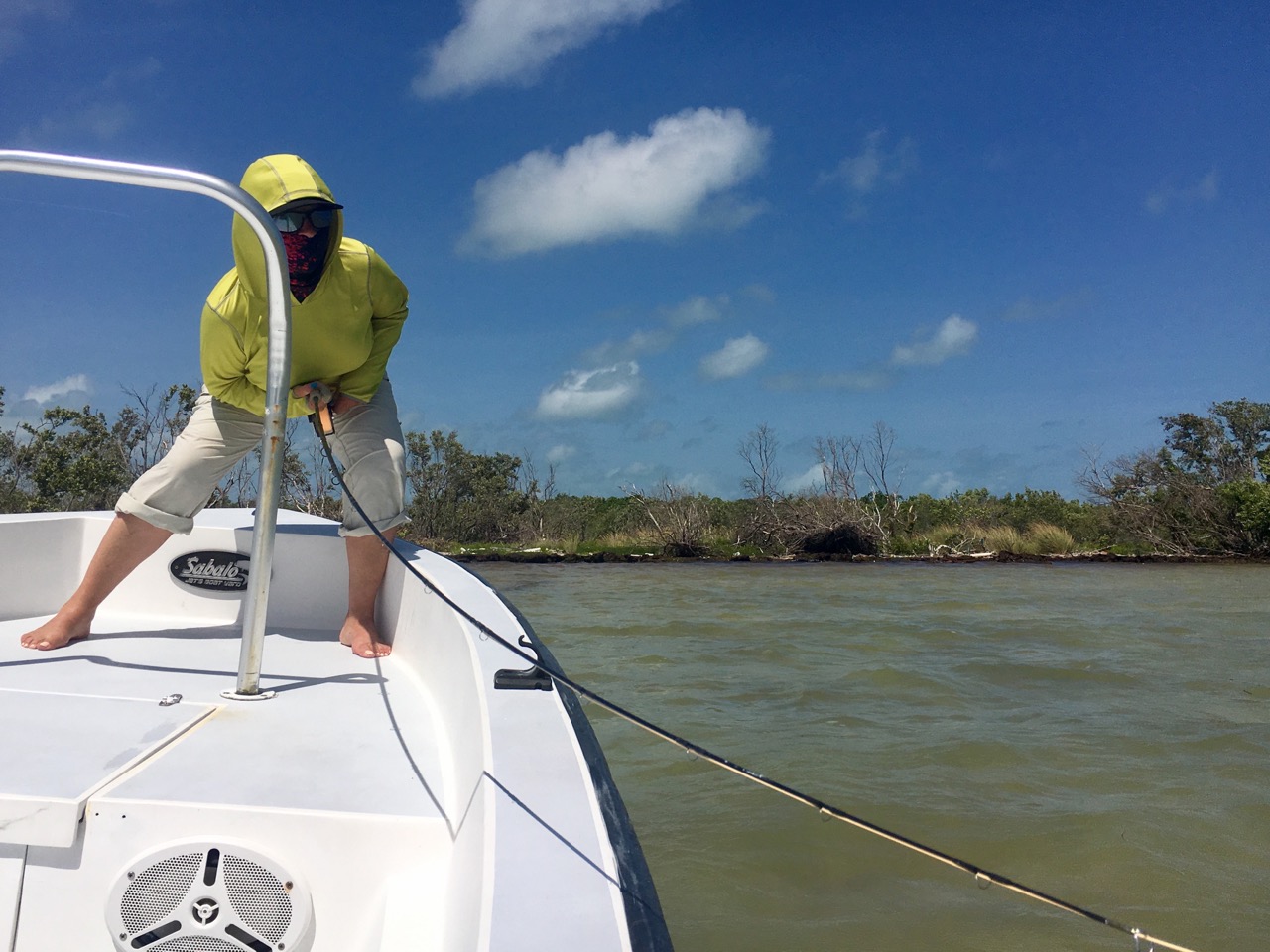 Cynthia puts her hips into the fight during the hour-long battle.

After about an hour, she gave up, and we landed the tarpon! Caesar had the biggest smile, and so did I. He told me to jump in, which I did. And that’s when he put the tarpon in my hands, told me how to hold it, and then got back into the panga so he could take the camera and grab the shot. There I was, alone, in the water, cradling this tarpon. Never had I imagined such a feeling.

When it was all over, he asked me if I wanted to go back to get the Grand Slam, and I said, “No.” I wanted another tarpon. And I got another that day. Both fish were caught on a white-and-red Deceiver, and two weeks later, I used the same fly to get some fall stripers back in Massachusetts.

Cynthia Harkness is the Fishing Manager at Orvis Dedham (MA). 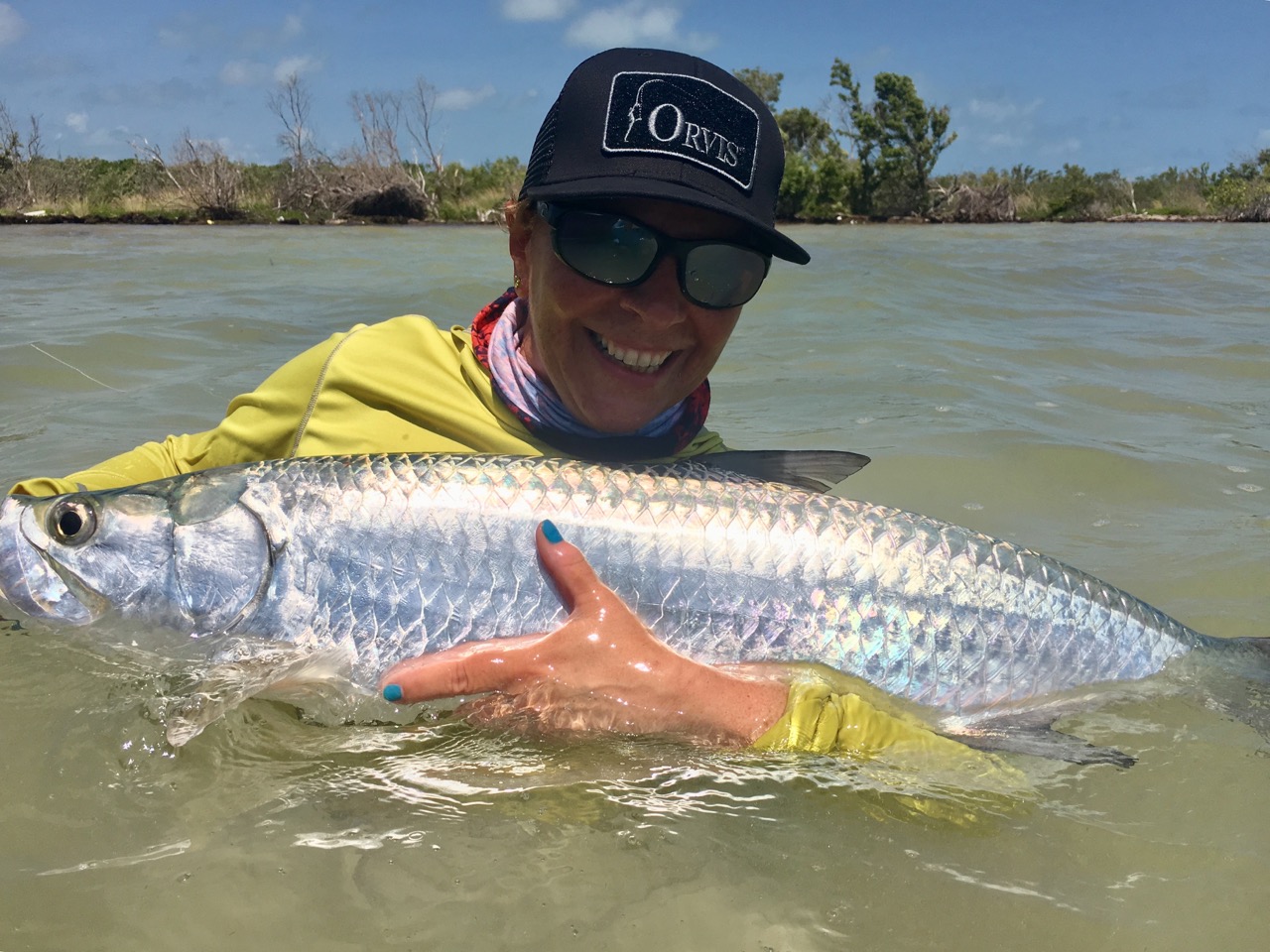 Once she had landed her first tarpon, Cynthia wanted nothing more than to do it again.

6 thoughts on “Photos and Story: An Angler’s First Tarpon in Belize”