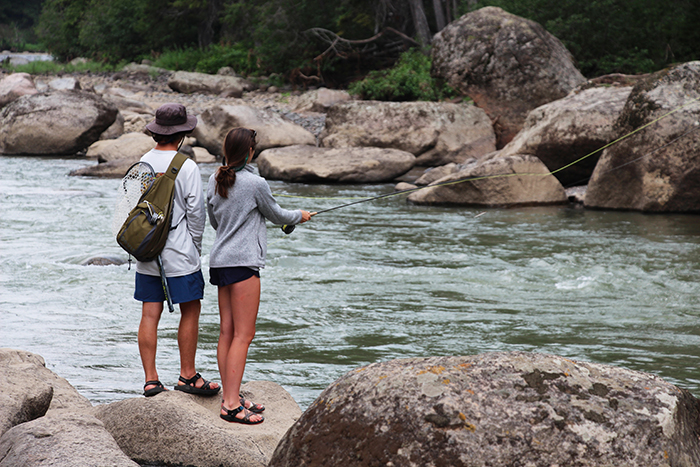 When I first heard about the Orvis 50/50 On the Water campaign, I loved the idea to inspire and celebrate women in fly fishing. I knew that’s exactly what I wanted to do with my girlfriend, Bridgit, to get her into the sport of fly fishing. It wasn’t hard to do, as she already loved striper fishing from her boat on Cape Cod, but she had never cast a fly rod before. Last winter, I promised I would teach her to fly fish, and she was very eager to learn. 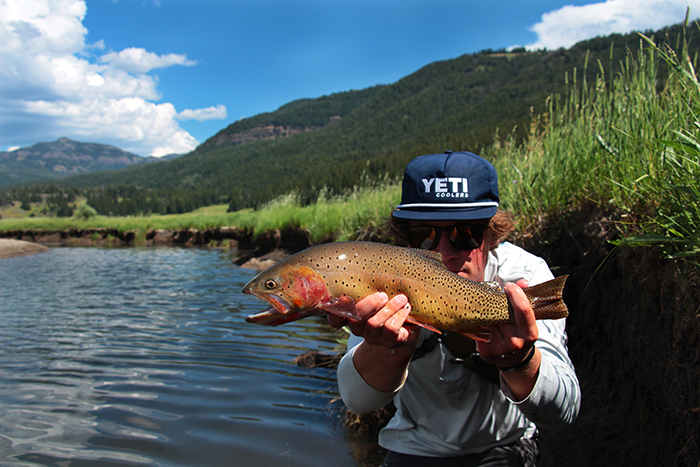 She spent the winter and spring studying trout and would have me quiz her on the identification of different species. When summer came, she was very excited to finally be able to get out and try fly fishing. I gave her some casting lessons, showed her how to set the hook, and outlined the basics of fly fishing. We started easy, just fishing local streams in the White Mountains of New Hampshire, where small brookies are plentiful. Although she had a bit of help from me, she was very pleased to finally catch her first trout on a fly rod. After some success there, we went up to my favorite spot in New Hampshire, the Upper Connecticut River in Pittsburg. She started to get the hang of it there and by the end of the day had caught some nice brookies and rainbows. Now it was time for the real test: fishing in the Greater Yellowstone Area.

My family traveled out West for 2½ weeks, and Bridgit would join us for the last week. We had never fished the region before, so we spent the first 10 days exploring Yellowstone National Park and surrounding waters. We fished mostly in the northeastern part of the park, on the Lamar River, Soda Butte Creek, and Slough Creek. We had good luck at each spot, but the fish could be a little spooky. We tried some other rivers in the area that get less fishing pressure, and they fished well, but didn’t have big cutthroats, which were my main target. That then became another goal for me: getting Bridgit on some nice cutthroats. By the time she arrived, we already knew where we should bring her. 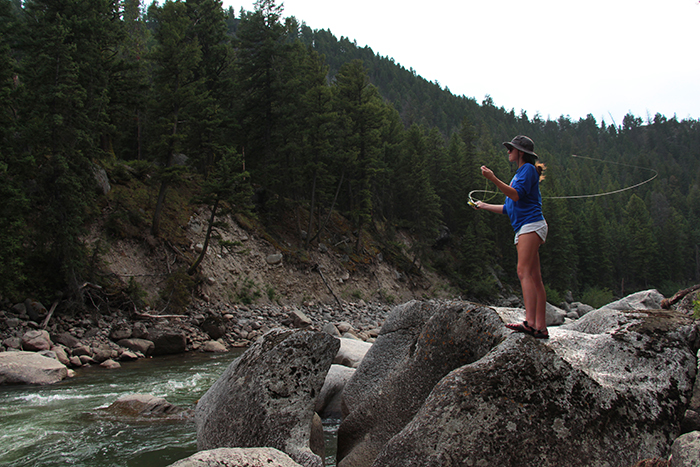 Bridgit casts in the boulder-strewn waters of the Lamar River.

We headed straight to our favorite spot: the canyon section of the Lamar River. We liked it because it doesn’t get nearly as crowded as the meadow section upstream, and there are still plenty of large beautiful cutthroats. I love watching them come up from the depths of the milky green water to cautiously take our foam hoppers off the surface, before darting back down to the boulders where they hide. 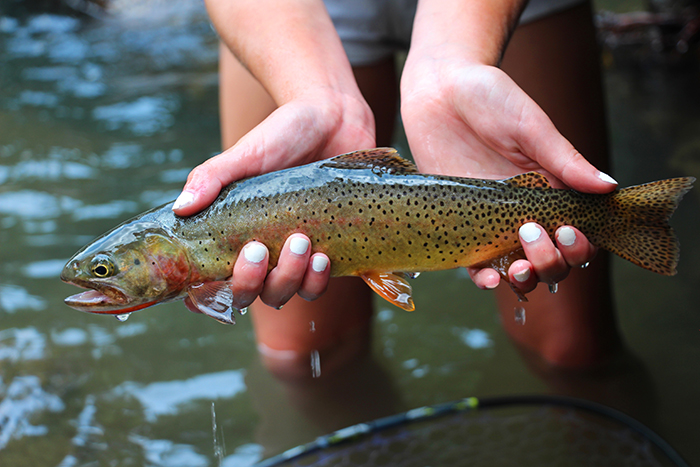 Bridgit’s efforts on the Lamar were richly rewarded.

We spent the afternoon climbing over boulders, making our way along the river, looking for good deep pools. It was still tricky fishing for her, as she was still a beginner. At first, she had a hard time trying to spot a cutthroat’s subtle take, but that’s where I could help, telling her when to set the hook. She got the hang of it quickly, though, becoming more independent, making good casts to where the fish would be, and trying to achieve a good presentation of her fly. 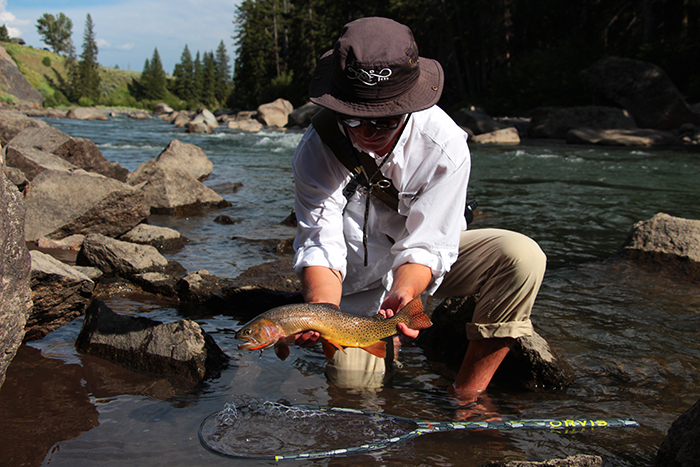 The author did pretty well in the canyon stretch, as well.

Finally, after some missed sets and a big one snapping her off, Bridgit landed a gorgeous cutty. She was thrilled, but still I had still helped a bit. She wanted to catch one without any help.

It was surprising with such big cutthroats in Mill Creek, which is only 10-15 feet across and quite shallow.

The next day, we went to Mill Creek, which was recommended to us by the folks at Parks’ Fly Shop in Gardiner. We drove far up along the river and got out of the car at a good looking spot. We immediately spotted a rising trout, so I handed her my rod and said, “Here you go. You know what to do.” She was a little hesitant at first because she was used to me helping her through each step, but she was determined to do it herself and become self sufficient at fly fishing. A few casts later, on a perfect drift, we saw the fish come up and she set the hook without me saying anything. She fought the fish and brought it to the net. She had finally caught a fish on a fly rod by herself–and not just any fish, but a beautiful and pretty decent sized cutthroat in a small creek. I don’t know which of us was happier.

A close-up of Bridgit’s first fish caught on a fly rod with no guidance.

After we snapped a few pictures, I watched her gently release the trout back to where it had come from. She now happily says she is an “intermediate” fly fisher.

Will hopes there will be more trips like this one in the future. 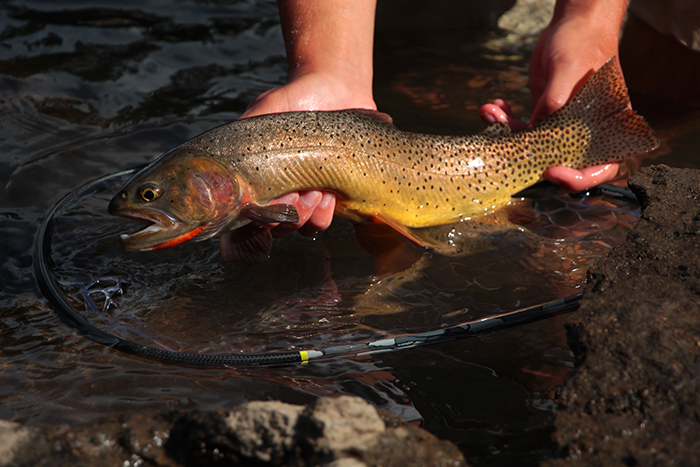 For an angler from the Northeast, big Yellowstone cutthroats are exotic and exciting.

It was a perfect ending to a great trip, hopefully the first of many trips like this for us. Although one of my goals for the trip was to get Bridgit on some nice cutthroat, my main goal was really to get her hooked on fly fishing, keeping in mind the Orvis 50/50 On the Water campaign. We just got back a couple days ago, and she’s already talking about getting a fly rod. I’d say that’s mission accomplished.

Will Bayha is from Waterville Valley, New Hampshire. A recent graduate of Holderness School, he will attend the University of Vermont this fall. Check out his videos and photos of skiing and fly fishing on vimeo and Instagram.

4 thoughts on “Photos and Story: Learning the Ropes in Yellowstone”