From the old Hydros reel (far left), the concept went through many stages before the final version (right).
Photos by Phil Monahan

In the early days of this blog, we posted a series of photographs and a description of the process that led to the creation of the award-winning Mirage fly reels. (See “Evolution of the Mirage Fly Reel.”) Now that the new Hydros SL Fly Reels are available, I thought it would be interesting to take a look at its path from concept to final product. 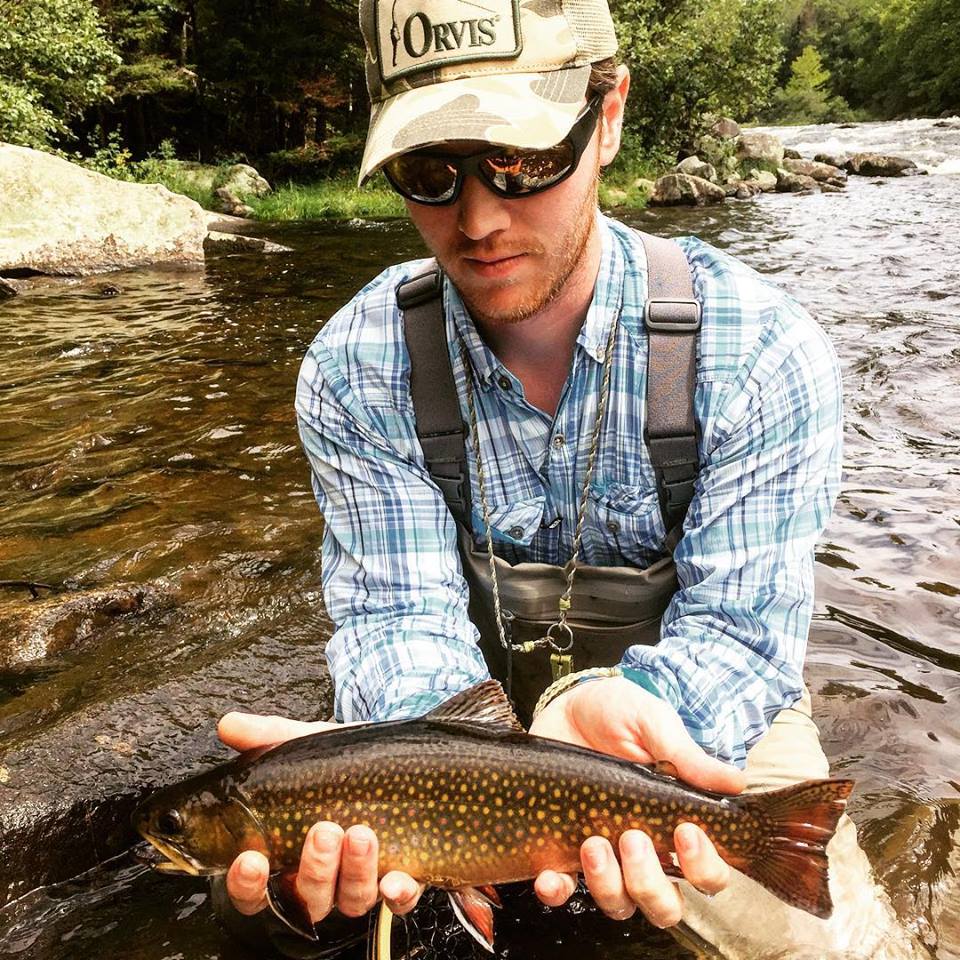 The man in charge of developing the new reel was Product Development Specialist Sam Orvis—No, really, that’s his name (a very distant relation)—who started in October 2014 by picking apart the old Hydros Large Arbor model to see where he could improve on it. A trained mechanical engineer, Sam took a long, hard look at every aspect of the old design. The folks in Orvis Rod & Tackle are their own biggest critics, always looking to make their products better, lighter, faster, more durable, and the goal was to create the best midprice reel on the market. 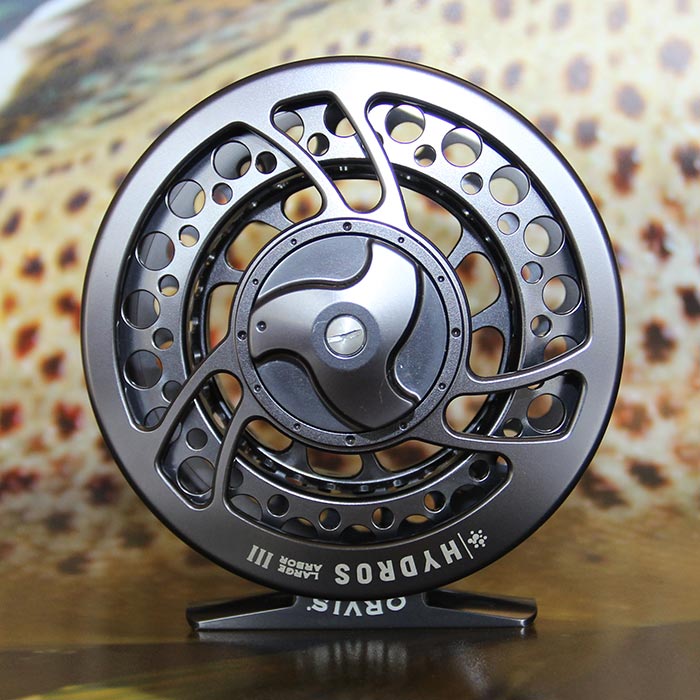 Step 1: The original Hydros Large Arbor had a designed based on the Mirage, but there were a few design and performance features that a new reel could improve upon.

Feedback on the Hydros LA suggested that anglers preferred larger overall dimensions to increase line-pickup speed, so the new reel’s overall dimensions were the first major decision. Minimizing spool deflection—how much side-to-side motion there is while the spool is spinning—was a priority, since the larger the arbor the more such deflection can affect performance.

The original Hydros, while it had a long sealed drag, did not always retain its seal, and the clutch bearing itself was not sealed at all. So Sam came up with a new drag housing that made use of a brass bushing and a stainless-steel wear sleeve to create a tight seal as soon as the drag was engaged. The sealed drag would make the new reel much more saltwater-friendly, as would a more open design that made cleaning the reel much easier.

As you’ll see from the photos below, the new Hydros SL went through many changes, both in engineering and design, along the way. And once feedback started coming back from field-testers, there were even more tweaks to be made to ensure the reel performed to expectations. 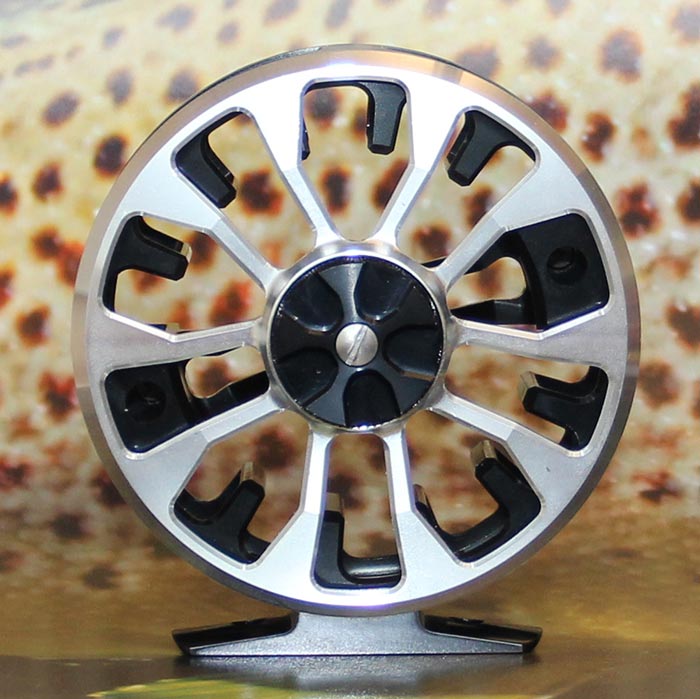 Step 2: Sam’s initial, basic concept for the new reel was really little more than a way to test the sealed drag system concept, although there was clearly something he liked because. . . 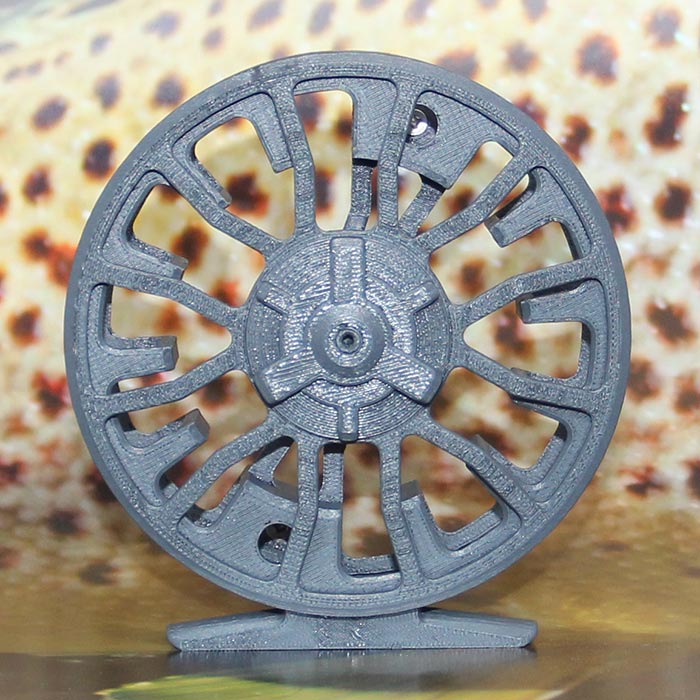 Step 3: The next iteration builds on that first look. This 3D-printed design sample offers some refinements. At this time, the idea was to come up with something that suggest ruggedness, in the way that a Ford F-150 does. 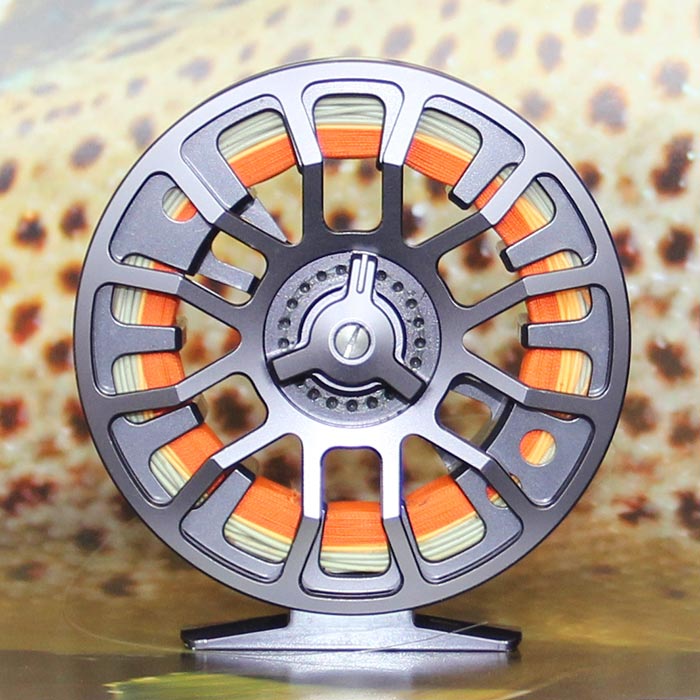 Step 4: The final version of this design concept was dubbed “The War Machine,” and everyone thought that it was too chunky and utilitarian. As Sam puts it, “I’m an engineer, so I engineer stuff. It was at this point that we realized we needed some help from actual designers.” 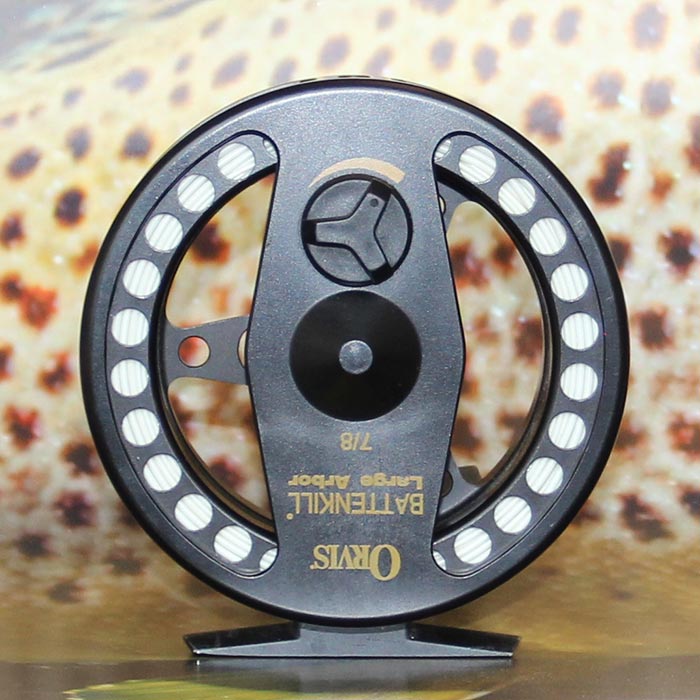 Step 5: To kickstart the creative process, someone suggestion that the new design could start with the old Battenkill Large Arbor, which had an open spool and a vertical frame support. 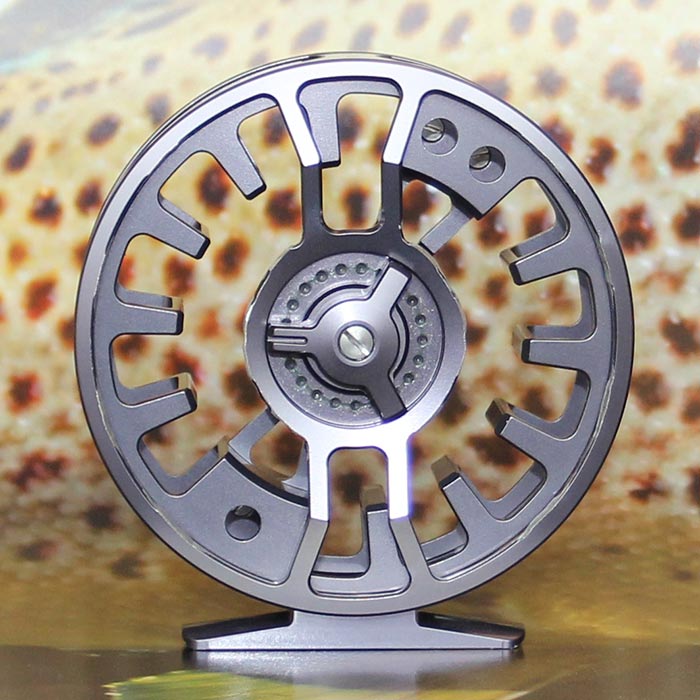 Step 6: As a way to think about how this vertical support system could work, Sam had a “War Machine” milled out, so just two sets of supports remained. 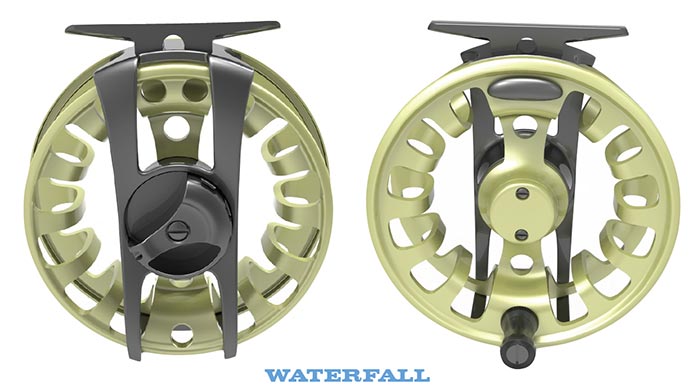 Step 7: The design team came back with these renderings of a fully open spool and tapered frame supports. While Sam loved the concept,the engineer in him was skeptical that such a reel could stand up to the demands of actual fly fishing, from regular wear and tear to fighting large fish. 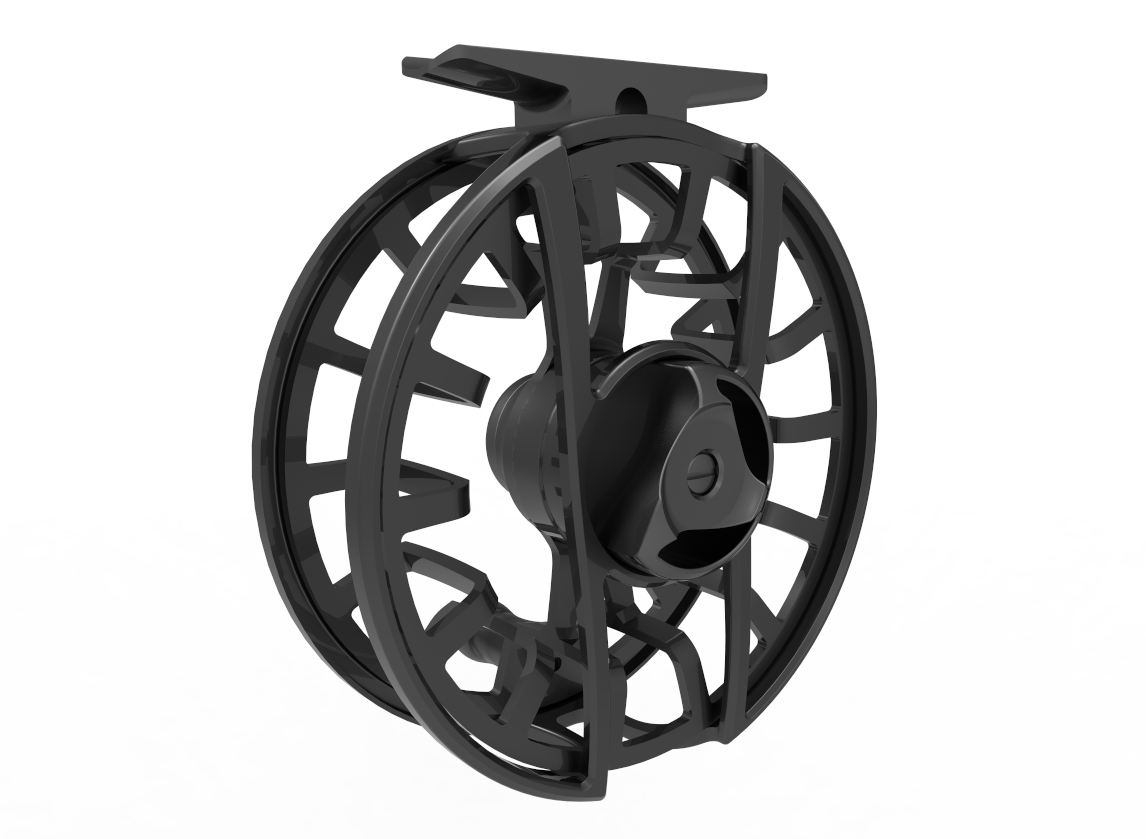 Step 8: Sam’s initial version of the new reel had been over-engineered, and in response, the designers had come up with something over-designed. So the job now was to find the sweet spot between the two concepts. The first step was to add a full frame to support the spool, as this technical drawing shows. They were definitely on to something. . . 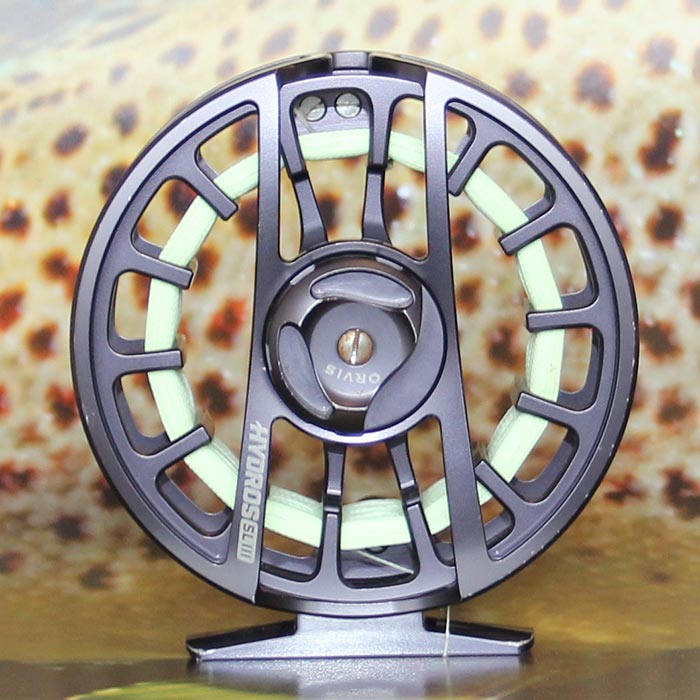 Step 9: First “final version” of the Hydros SL was ready for the field-testers. Orvis CEO Perk Perkins used this particular version for bonefish. One of the first things that the testers discovered was that the drag system relied too much on compression and didn’t maintain its seal when the drag was set very light. Sam redesigned the system, trading an O-ring seal for a “wiper-style” seal that sat deeper in the mechanism. Also, in all the hundreds of hours of field testing, a single angler had one time had his line catch in the channel in the frame visible at the top of the photo above. But that one instance was enough for Sam to redesign that, as well. 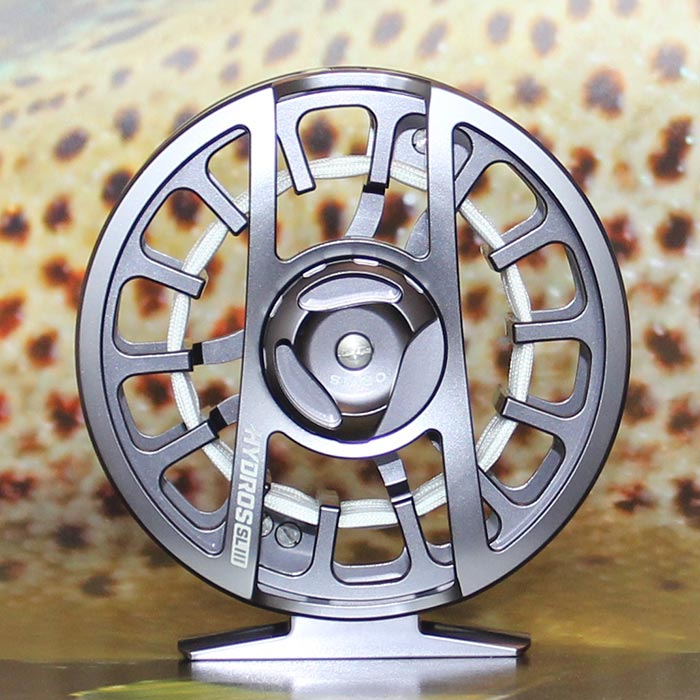 Step 10: Final version of the Hydros SL found that coveted “sweet spot.” The frame rim and supports were beefed up slightly and a third set of supports for arbor were added for extra durability. And you’ll note that the line-catching channel at the top is now protected.

The now-available Hydros SL reels feature an extremely fast line retrieve (8.25 inches per second in the Hydros SL III trout reel size), a completely sealed drag, and a new design to enhance rugged durability. The Hydros SL has tighter tolerances and less spool wobble than its predecessor, and the tighter tolerances minimize the chance of backing or running line migration outside of the spool.

The spool edge is thicker and thus stronger than the original Hydros. Less spool wobble due to the increased shaft engagement will increase the life of the reel and reduced wear as the spool rotates only on the surface intended. We also replaced the big, obtrusive drag knob on the original Hydros with a lower profile, ergonomic knob with thumb location indent and knurling for secure grip.

You can see Sam hard at work in the new video announcing the Hydros SL:

7 thoughts on “Photos: The Development of the New Hydros SL Fly Reel”