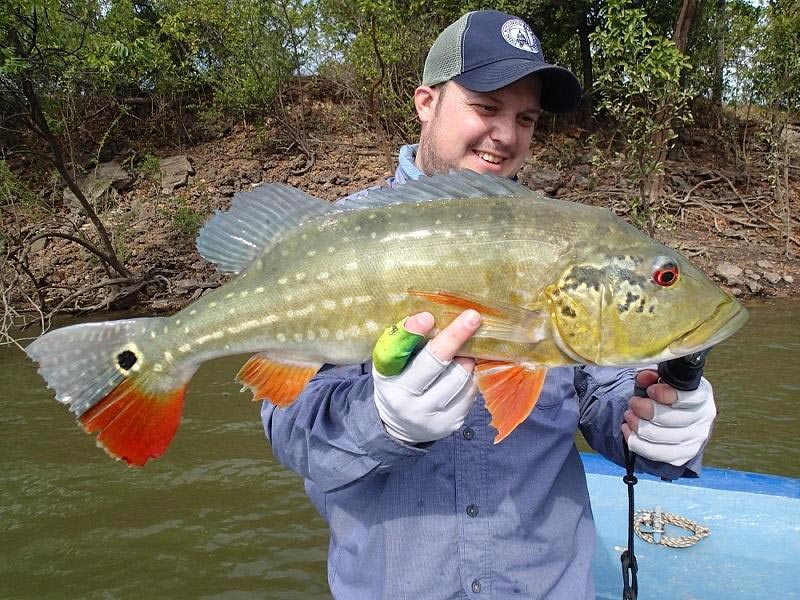 I just got back from a 10-day trip to Colombia, where I split my time between Bogota and the Rio Bita, a minor tributary to the Rio Orinoco, which lies on the border between Colombia and Venezuela in the heart of Los Llanos. Bogota was great: museums, colonial architecture, decent food, good beer, very friendly people, and just a unique Latin culture. 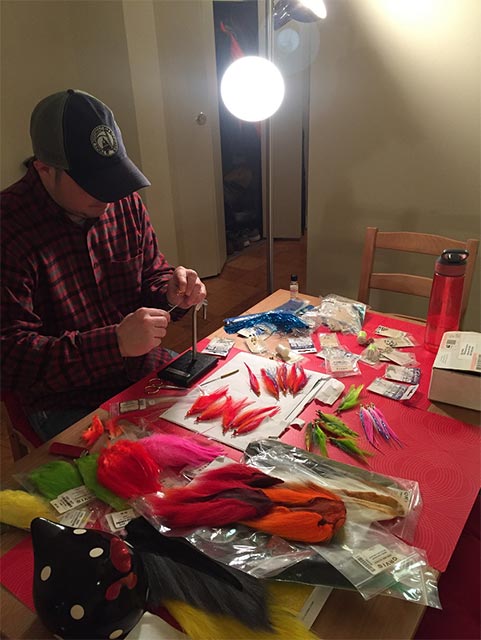 Red, Orange, Pink, Chartreuse, were all on the pre-trip tying list.

The Rio Bita was unbelievable. It lies in the very center of Los Llanos, a tropical grassland that sits just above the equator and is dominated by wet and dry seasons. During the rainy season, rivers swell and burst their banks, while the grasslands and woods are temporarily turned into a giant wetlands. During the dry season (now), the river levels subside and become prime for targeting the game fish that inhabit the region. The watershed hosts the three major peacock-bass species–speckled, butterfly, and royal. In addition to the peacocks, the rivers hold arowana, piranha, payara, and numerous other exotic fish species. I came for the peacocks, which are know locally as pavon. And the Rio Bita did not disappoint. After three days of casting 9- and 10-weights at these brute fish, I was totally beat. It wasn’t just the 100-degree temperatures and casting heavy fly tackle, but because these fish hit and fight so hard. 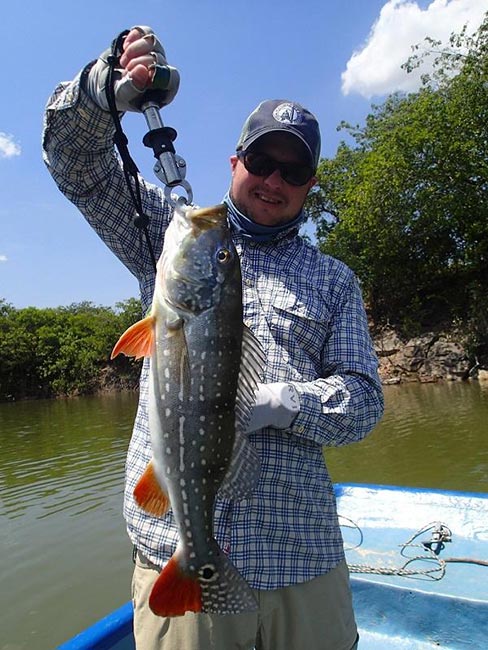 Another three-pound speckled came to the boat.

I brought several dozen monster flies in the most obnoxious colors you could think of–orange, yellow, red, pink, and blue. I had Tommy Mattioli tie me up some patterns that were just amazing. If you buy shad flies from any of the Mid-Atlantic local Orvis stores, Tommy is the one who tied them. I also spent every night the week before I left at the vise. On my third cast of the trip, I retrieved a fly to the boat and teased it along to see how it looked in the water. As I commented out loud to my Spanish-speaking guide how good the pattern looked in the water, a 5-pound peacock came out of nowhere and crushed it. This set the tone for the next three days of fishing, which featured savage strikes, insanely hard-pulling fish, and fast-and-furious action. 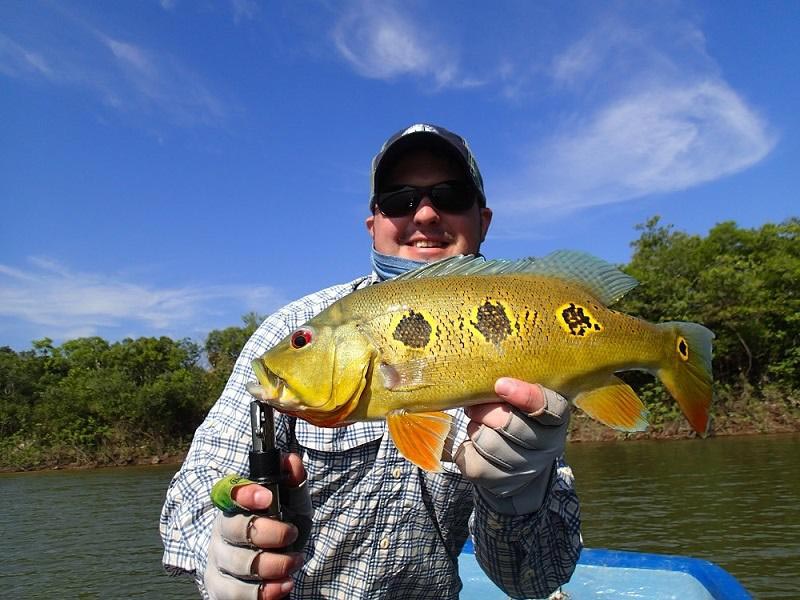 The butterfly peacock sports huge spots on its sides.

I fished leaders terminating in 40-pound-test fluorocarbon pretty much the entire time, and it still didn’t keep piranha from biting through the tippet and destroying flies. After a few peacocks landed, I would repair the tippet section and the sharpen the hook. The wildlife was equally impressive, I saw freshwater dolphins and stingrays, parrots, eagles, cayman, monkeys, and more tropical-bird species than I could count. 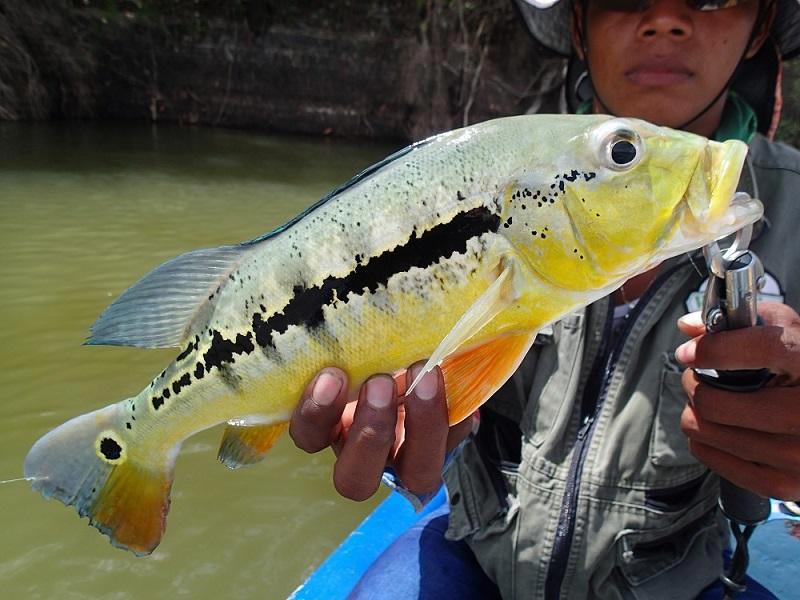 The royal peacock bass looks as if it had been designed by Salvador Dali.

The owner of the plantation I was staying on was the only person I spoke English with for almost five days. My guide “Jason”, a local 20-year-old, spoke no English. I speak almost no Spanish. And yet we found ourselves laughing together at hung-up flies and celebrating the larger fish we caught. At lunch, I would pull out my camera and show him the stripers of the Potomac and brook trout from Shenandoah National park. His face would light up with the wonderment of an “exotic” fish from a far away place that was so beautiful, much as my face must have looked with each fish from the Rio Bita. 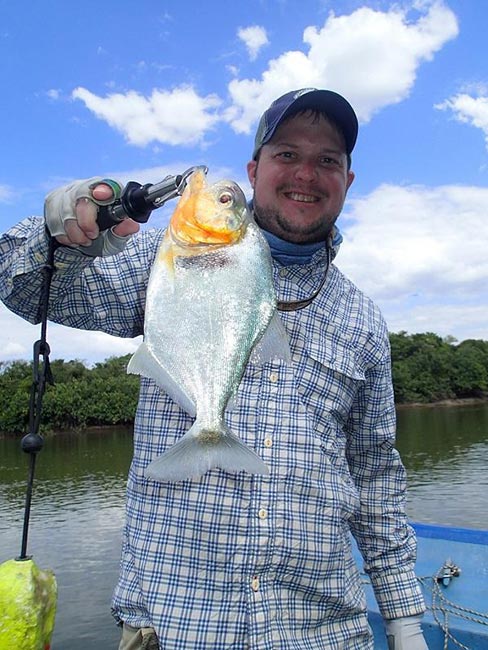 The notorious piranha destroys any fly it touches.

I am not going to pretend that Colombia is without its problems and that guerilla activity and security risks aren’t a very real part of traveling to this part of the world. But things seem to be calmer than at any point in the last several decades, and we can only hope they continue to improve. As the sun set the last night before I headed back to Bogota, I snapped a picture of the river and was thankful that I was able to be there and to fish such an amazing part of the world.

Trent Jones is the fishing manager of Orvis Bethesda (MD). 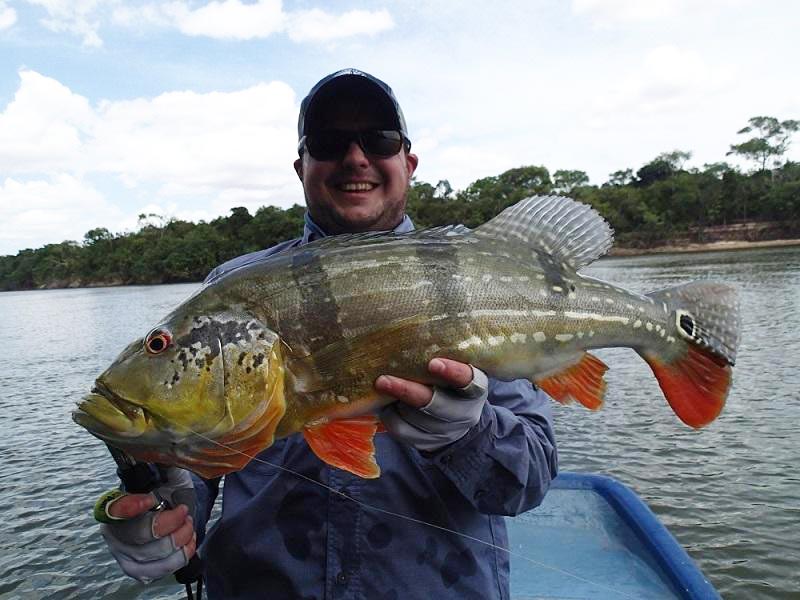 Here’s the powerful, glorious nine-pounder that the author traveled to Colombia for!

6 thoughts on “Photos: The Peacocks (and more) of Colombia”