When trout and salmon aren’t available, grayling are an exciting quarry on uncrowded rivers.
All photos courtesy Alba Game Fishing

Scotland features 30,000 lochs, filled with wild brown trout, and hundreds of salmon rivers, including the rivers Spey, Tay, Tweed, and Dee. There is, however, another jewel in the Scottish angling crown: the exciting grayling.

This is the story of a Scottish fishing guide who relishes the end of the fishing season and onset of cold weather, to brave the elements and target the Lady of the Stream, the grayling, and believe it or not, Scotland has some of the finest grayling rivers in Europe. 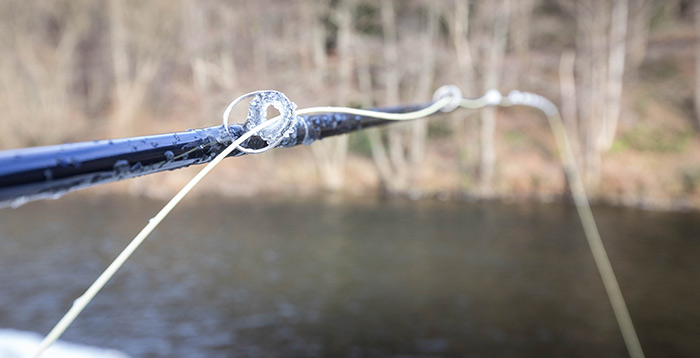 Winter fishing has its unique challenges.

A Fishing Guide in Winter
As a fishing guide, I get a chance to unwind when winter comes, but eventually my thoughts always turn to the rivers and the quest to catch grayling. There are two main rivers that we target: the River Annan in South West Scotland and the River Tweed in the Scottish Borders region. Both of these rivers hold massive stocks of wild grayling and are within easy reach of my hometown of Edinburgh.

I caught my first grayling when I was 11 years old, some 44 years ago. I was a skinny, wee lad, standing on a bridge on a tributary of the River Tweed called the Leader Water. I spotted a huge trout moving upstream. 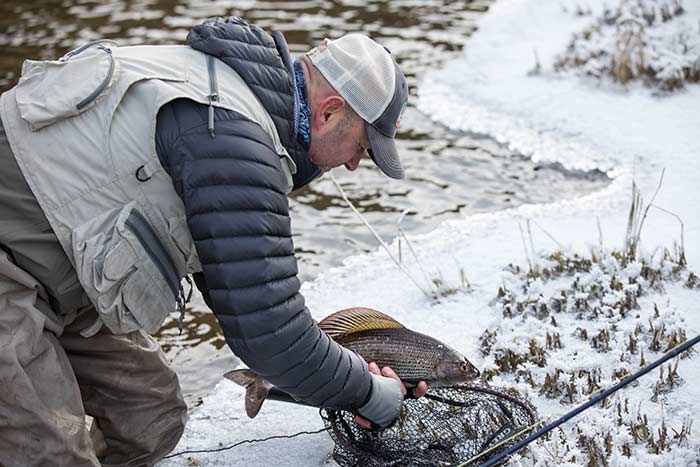 A typical Tweed River grayling is ready for release.

I was new to fly fishing. I inherited my Uncle Jimmy’s 11-foot, 6-inch Daiwa Whisker fly rod. The Whisker was too heavy for trout, and designed for sea trout and small salmon rivers. I loved it nonetheless, and its length proved useful when I was flicking bugs and nymphs into awkward spots, since little casting was required. I had a secondhand Leeda LC100 fly reel, bought with money I had saved from washing cars. A small, plastic 35mm film case was my fly box, and it was filled with home-tied weighted shrimps, all very crude, but highly effective.

I stared down at that trout, watching it move slowly upstream. I ran down to the riverbank and positioned myself upstream. I began to work my way down to where I thought the fish might be, and within no time I connected and was playing a very big fish. After a hard battle, I was delighted and surprised to see a huge grayling shimmering in the net. This magnificent silver-and-olive fish, with a huge dorsal fin, remains a memory that will stay with me forever and laid the foundation for a lifetime fascination. The fish weighed a few ounces under 3 pounds, which is quite a specimen when you consider the UK record is 4 pounds, 4 ounces. 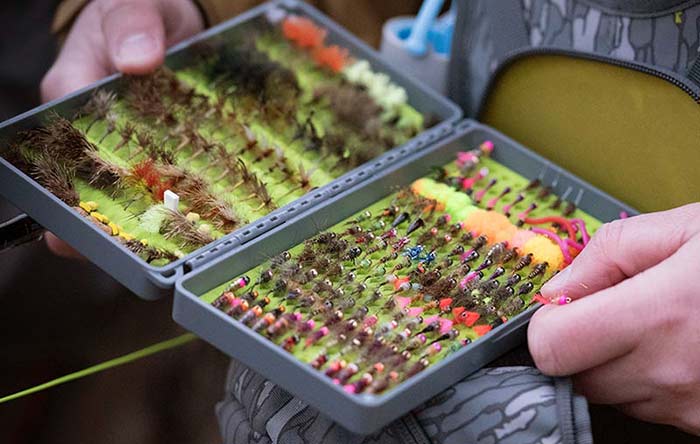 One box of flies, of various weights, is all you really need.

Techniques For Grayling Fishing
The grayling has a soft mouth, so it pays to play them carefully. They fight doggedly and with great determination, and are adept at shaking the hook. A 10- to 11-foot, 3- or 4-weight rod is ideal. Upstream nymphing with tungsten-weighted bugs is the most common approach, and it’s best to fish close. I wade carefully upstream and pitch the nymphs upstream, letting them float down on a dead drift. As the nymphs drift downstream, I try to maintain the drag-free drift for as long as possible, and this is where a longer rod is useful. Keeping the rod high minimizes the amount of line in contact with the water, and this, too, restricts drag and helps to control the depth of the nymph.

In winter, I prefer fishing two flies, with about 8 inches  from the dropper to the tail fly. A simple three-turn water knot will suffice and my go-to tippet is 5X. Naturally the greater the diameter of the tippet, the more drag in the current and therefore the more difficulty in getting the flies to sink, so sometimes it pays to drop down to 6X. A heavy tungsten jig head goes on the point, and the dropper is a lighter shrimp pattern or nymph. These grayling stay close to the bottom in cold water, so fly choice is not as important as depth. If your fly isn’t heavy enough and bouncing along the gravel bed, you’re not in the game. 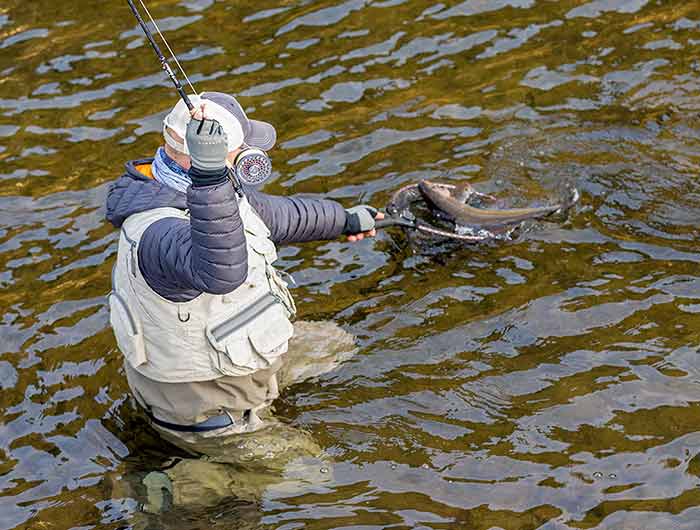 I also use a New Zealand-style sight indicator, since I’m 55 and my eyesight deserves some help. Obviously fishing weighted jigs; you need to give the indicator yarn a good gink, to avoid it being pulled under by the nymph and resistance from the bottom.

You can travel fairly light, so front pack is ideal, and all you really need to carry are tippet, flies, and spare indicators. Many grayling anglers swear by neoprene waders for winter fishing, but I prefer lightweight waders and good thermal leggings. This gives you greater movement when walking to the next pool.You definitely need studded soles on your wading boots, though. You need to be surefooted in the winter months, as a dip can be a tad unpleasant! 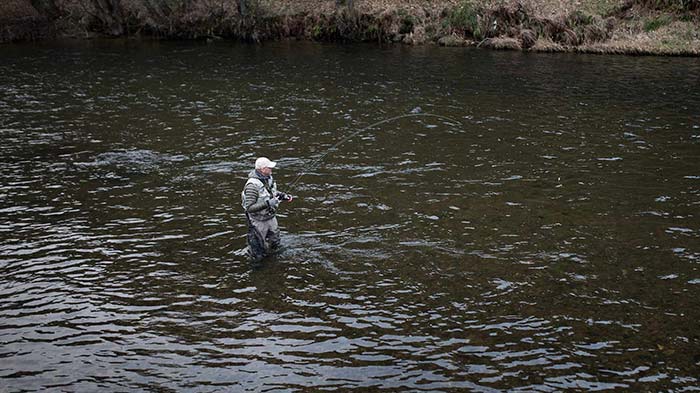 A steady, even current is perfect winter holding water for a shoal of grayling.

It’s rare to see another angler during a day of winter fishing. There is an abundance of water, and the fish are spread throughout the river. Take a look at the photo above, which is ideal grayling habitat. In an even current like this, the grayling can use their dorsal fins in the current and put up a hard fight. Since grayling will shoal, when you connect with the first fish, it pays to cajole it downstream quickly with  little fuss to avoid disturbing the shoal.

Winter in Scotland can be a dark and dreary affair. The devastating effect Christmas has on your wallet, the weather, the suffering of in-laws during the festivities . . . I could go on. When the salmon season comes to an end, many fishermen hang up their waders and try to avoid the misery caused by lack of sunlight. Take my advice, get out in a Scottish winter and fish for grayling. It’s good for your soul! 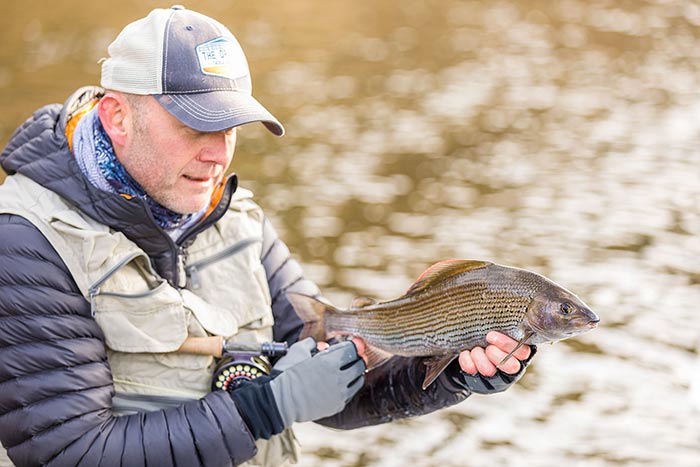 These fish fight hard and use the current to their advantage.

Stewart Collingswood is founder and head guide of Alba Game Fishing, which has arranged fishing trips and bespoke fishing vacations throughout Scotland for the last 14 years.