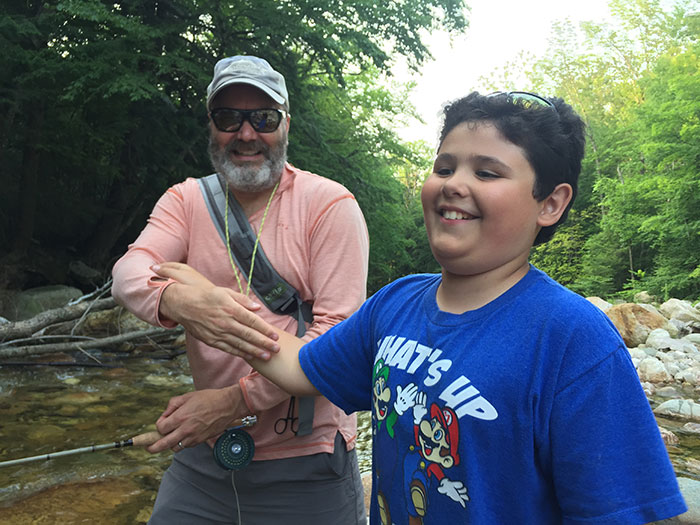 Garett teaches me the “fish shake” after landing his first brookie.
Photos by James Hathaway

Longtime Fly Fishing blog readers may remember James Hathaway, who used to be Orvis’s Communications and Conservation Manager and whose byline appeared here regularly. He recently became CEO of Make-A-Wish Vermont, and in a remarkable coincidence, his first wish involved fly fishing. So he knew just whom to call for assistance. 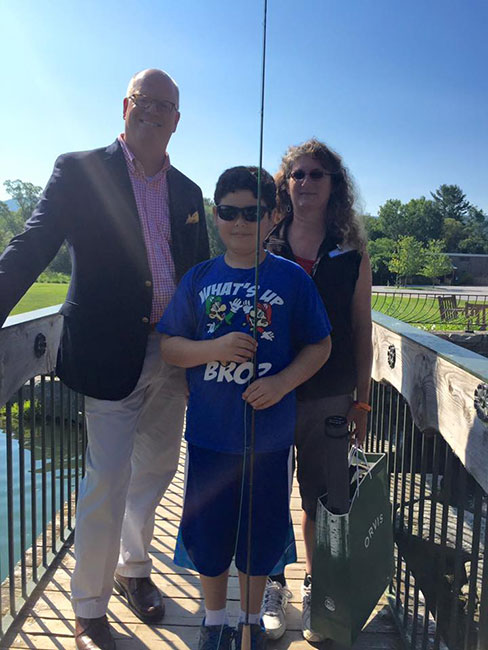 Bill Eyre met garett and his mom at the Orvis Flagship store.

Make-A-Wish specializes in granting wishes to kids with life-threatening medical conditions, which is how James met Garett Peace, a 10-year-old from East Montpelier, Vermont, who has been battling leukemia. According to Garett’s dad, the boy has been obsessed with fly fishing ever since he saw A River Runs Through It, and his dream was to fish the Montana rivers that Norman Maclean’s inspiration. Specifically, he wanted to fish the Blackfoot River on his 11th birthday. Garett and his family will be heading west later this week to make that dream happen. But first, he had to make sure he knew how to fly fish, and what better place to do that than the Orvis Fly Fishing School at our flagship store in Manchester? 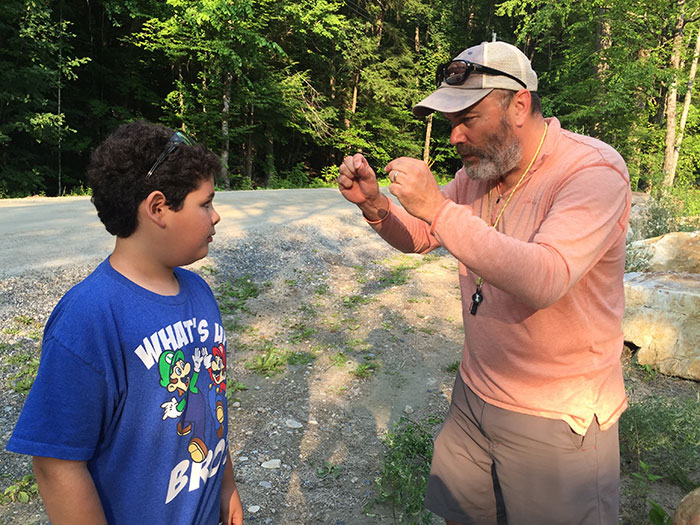 Before we started fishing, Garett learned how to make a blood knot.
Photos by James Hathaway

The Peace family arrived on Saturday morning, where they met Orvis Director of Branding and Corporate Marketing Bill Eyre, who saw that Garett was fully outfitted for his adventure and enrolled in the school. Garett is so excited about fly fishing that an all-day school wasn’t enough for him, and he asked James if it was possible to go fishing at the end of the day’s classes. So James called me. 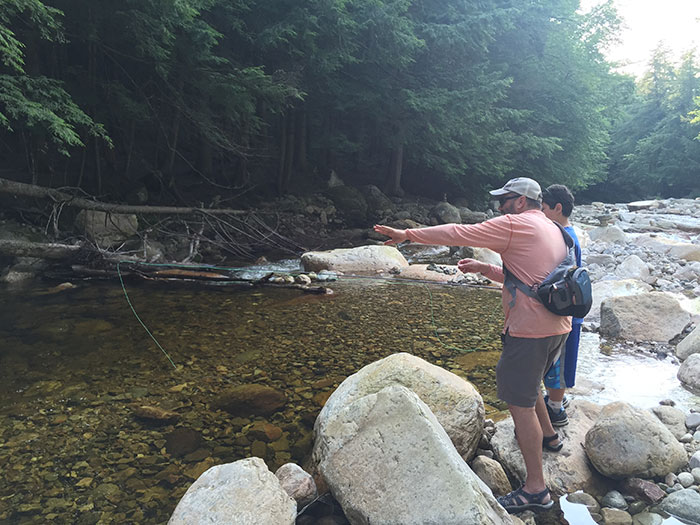 I didn’t have to explain much: this is one fishy kid!

I met Garett and his parents on the banks of a tumbling freestone stream that flows out of Green Mountain National Forest, and we rigged his new Recon 5-weight for brook trout. I started him out with a Royal Wulff, so he’d be able to see it easily on the water. Right away, Garett showed that he had the “right stuff,” and he got his first strike on his second or third cast. These low-water brookies are lightning fast, and Garett wasn’t quite quick enough, but he caught on quickly. 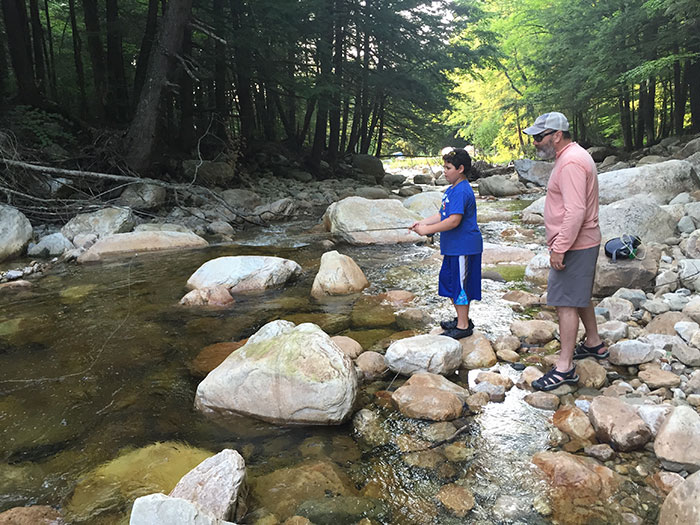 For a 10-year-old, Garett’s level of concentration was exceptional.

We only had about an hour on the water, but Garett’s casting and presentation improved and he managed to land two beautiful fish in the last 15 minutes. I’m sure that if the family hadn’t been forced to leave for a dinner appointment, he would have cleaned up as the sun went down.

For someone who has obviously been through difficult times, Garett had all the energy you’d expect a 10-year-old boy, and his enthusiasm for fishing knows no bounds. He was so excited to catch those wild trout that we had to practically drag him off the water. “I have a good feeling about that pool up there,” he kept saying, until finally his dad had to shut us down. 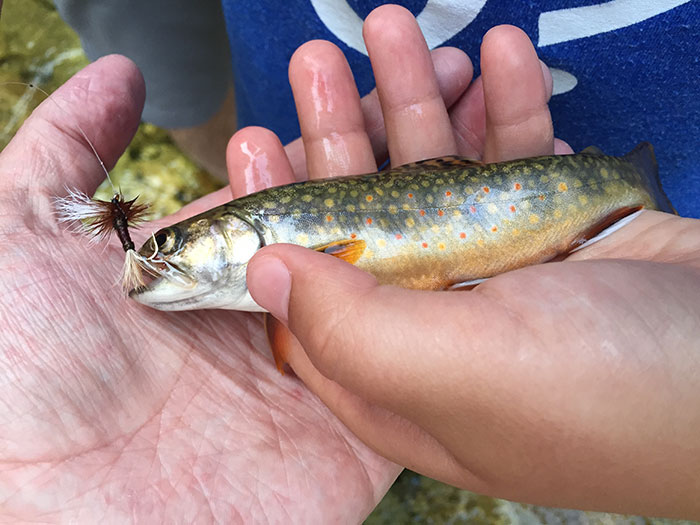 His first wild fish on a fly got him excited for more.

Make-A-Wish is a wonderful organization, and we were extremely happy to be part of making Garett’s wish come true. We’ll update you on the Montana portion of his adventure next week. 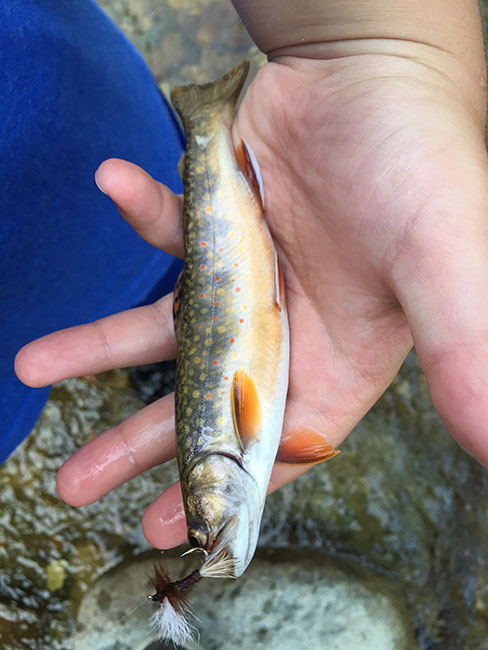 The second, larger brookie had Garett stoked for his Montana adventure.

6 thoughts on “Photos: Working with Make-A-Wish Vermont to Get Young Garett on the Stream”