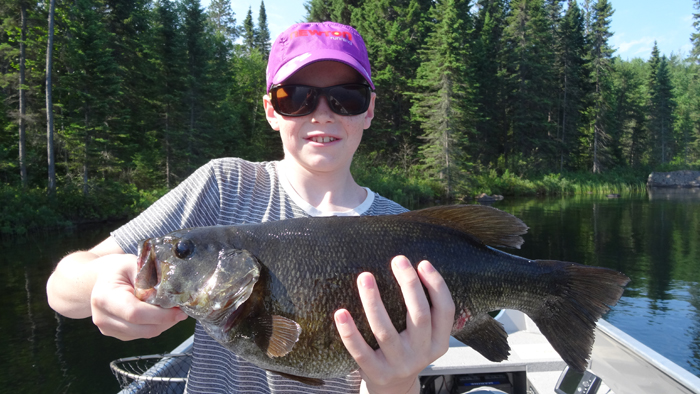 Though not a fly-caught fish, that’s still an incredible smallmouth. Look at that belly!
Photo Courtesy Hawk Lake Lodge

While this isn’t a fly-fishing story, it’s still pretty awesome. One of our guests, 11-year-old William Lorden, was fishing with us last week and got into a big mayfly hatch. Bass had been swarming the waters for days before William headed out with his father, Tommy, to see if they could entice some very full smallies to eat. What happened next was something special.

They had been fishing most of the day, landing 15- to 18-inch bass on jigs when William latched into a big fish. Thinking his son was snagged, Tommy paid little attention to William, who was struggling at the front of the boat with what he was about to find out was an historic catch. The fish began to run, still staying deep—a sure sign of a trophy. But what William and Tommy saw when the fish hit their net was something extraordinary: it turned out to be a 24½ inch smallie that weighed an estimated 9 pounds. They quickly measured the fish and snapped a few pictures before returning to the lodge for dinner.

What they did not know was that they had just tied the Freshwater Fishing Hall of Fame world record for a catch-and-release smallmouth bass. Congratulations to William for a true fish of a lifetime!

One thought on “Potential World-Record Smallmouth Caught at Hawk Lake”