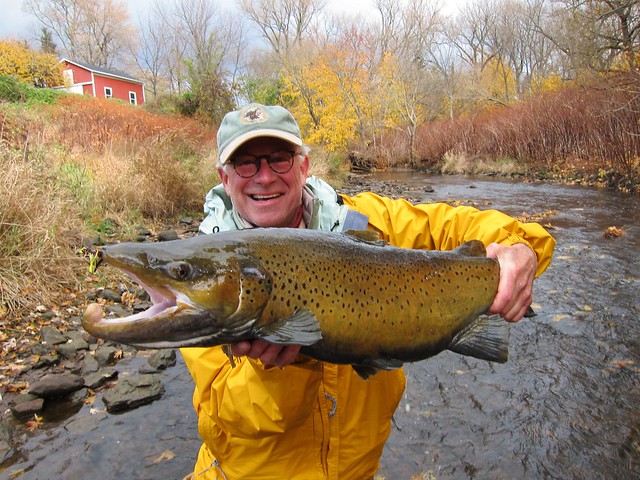 Big browns feed voraciously in preparation for the lean months ahead and will hammer a well-presented streamer.
Photo by Scott Feltrinelli

When leaves start to change color and nights turn chilly,those anglers still on the water are enjoying some of the best brown-trout fishing of the year. Having spent the summer sulking in deep pools and under logs and brush, the biggest browns start to move into shallower, more accessible lies, driven by the spawning urge and the need to bulk up before the long winter. These fish are less cautious and more aggressive than they are in any other season, so if you dream of landing a brown over 20 inches—or maybe even a monster over 10 pounds—then the period from late September through November offers your best shot across much of the country.

From Top to Bottom

Most fly-fishing for autumn browns requires patterns on opposite ends of the size spectrum—both tiny dry flies and huge streamers can work at different times. The major late-season hatch across most of the country is the Baetis, or blue-winged olive, but the fall species are considerably smaller than their springtime counterparts, so carry patterns in sizes 18 through 22. Flies tied with cul de canard (CDC) wings work especially well because they can be fished on the surface or just below, to mimic emerging mayflies.

The best part about autumn olives is that they usually hatch in mid- to late morning, and the largest emergences occur on overcast, or even snowy, days. Look for fish to start rising in slower water—eddies, back channels, and along the bank. Because most rivers are lower and clearer in fall than they are in spring, you must wade carefully and make delicate presentations. If you cast your line over a trout or allow your fly to drag at the wrong moment, you run the risk of putting the fish down. Move slowly, plan your approach, and focus on achieving a perfect dead drift.

While casting small patterns during a hatch can be a lot of fun, if you’re in search of true lunkers, you’re better off chucking some serious meat flies. Large brown trout are voracious predators, feeding almost exclusively on larger prey such as baitfish, crayfish, and even smaller trout. A growing cult of streamer aficionados takes to heart the old adage that “big flies catch big fish.” Especially in the upper Midwest, it’s not unusual to see anglers casting articulated patterns up to six inches long, loaded up with features such as lead eyes, rubber legs, and sparkly materials.

Oftentimes, the crappier the weather, the better the streamer fishing because the fish are less wary on dark days. Aggressive browns will usually strike a fly as soon as they see it, so if you cast to a spot a couple times without a strike, move on. Covering a lot of water is the key to success, and floating a river is the best way to get your flies in front of a lot of fish. Big browns are generally lazy, preferring to hold in slow water that offers easy access to prey. Anything that interrupts the current along a bank—an indentation, fallen log, or boulder—deserves a cast or two. 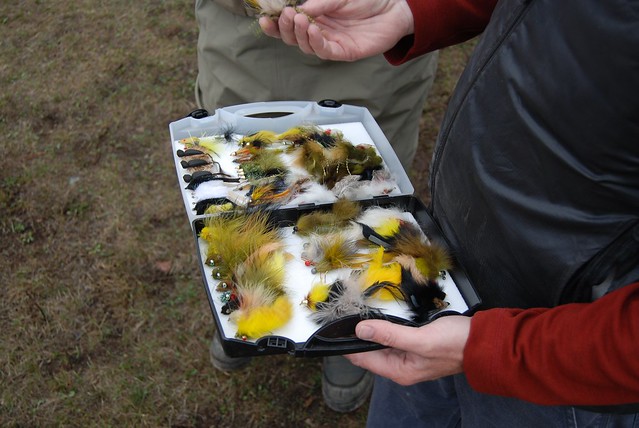 There’s no better time to throw some serious meat patterns than fall.
Photo by Phil Monahan

For casting dry flies or nymphs for fall browns, you need to be able to make delicate presentations but still have enough muscle to land a big fish. A 4- to 6-weight rod should do the trick, with the bigger rod preferable on larger rivers. You’ll need a floating line and a 9-foot leader tapered to 5X or 6X, to accommodate tiny flies.

To avoid blowing out a rotator cuff, use a 7- or even 8-weight rod for casting big streamers. Over the course of a day, you’ll make hundreds of casts, so you’ll want to let the rod do most of the work. A sinking-tip line will get your fly down fast and allows you to use a shorter leader. A 3- to 4-foot level leader of 2X fluorocarbon will give you plenty of pulling power.

One final note: Because brown trout spawn in the fall, wading anglers should be on the lookout for active redds and should take great pains to avoid disturbing the gravel in these areas.

2 thoughts on “Pro Tip: Go Big and Small in Fall for Brown Trout”