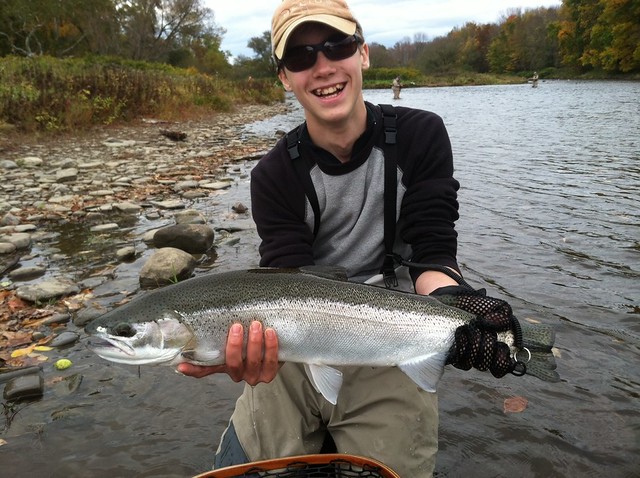 It’s a beautiful time of year on the Lake Erie tributaries. The leaves have turned, the light shimmers on the rocks as the water distorts its reflections, and there is no one out on the streams! Low, clear water can scare many anglers away, as these conditions can produce spooky steelhead that will run for the hills the first time your line hits the water. But never fear: these fish can be caught.

Here are a few secrets to catching steelies in low, clear water:

1. Hike away from the road and public-access points until you find pods of unpressured fish.

2. When fishing a pod of steelhead, don’t just cast blindly into the pool. Select one fish at a time and present your fly to that steelhead. Watch the head and see if it moves at all or if the tail begins to wag. If it does, the steelhead is interested and you should concentrate on that fish.

3. Cast small, unweighted Clouser-type streamers. I prefer those tied with white Angel Hair and a dark lateral line running down the side of the fly, in sizes 10 and 12.

5. Mend and stop the swing, so that the fly moves directly upstream from that specific fish.

6. Don’t be too mesmerized by what is happening when you watch the steelhead chase down your fly.

7. Remember to set the hook.

Alberto Rey is an Orvis-endorsed guide in Fredonia, New York. He’s also a Distinguished Professor for Research and Creative Activity at the State University of New York at Fredonia.

3 thoughts on “Pro Tip: The Secrets to Low-Water Steelheading”