I have a problem to admit: I have become a fly snob! The more time I spend fly fishing, the more concerned I have become with the aesthetic appeal of fly patterns. I believe that I developed this desire for perfect patterns for several reasons. First, since I have been fishing for trout as long as I can remember, my fish sense has developed to a very advanced stage where I know that trout prefer the flies with flawless hackle and wing construction. Next, I have spent tons of hours looking at pictures of beautifully manicured fly patterns in catalogs when preparing fly orders for our shop. Finally, when visiting all the local fly shops around Southwest Montana, all you see are thousands of bins filled with perfect imitations of Prince Nymphs, Elk Hair Caddis, and Woolly Buggers.

I was reminded yesterday that trout don’t really care what your fly looks like as long as it looks buggy. On my maiden float trip on the Madison River for 2015, I fished with two of our wrangler/fishing guides from the ranch, Elliot and Craig. Elliot has recently started learning the art of fly tying. Anyone who has spent time behind the vise knows that it can be frustrating, and in the beginning it is hard to get your patterns to look anywhere close to what you intended. When I was starting out, I threw away plenty of flies that I had tied just because I thought they were ugly and didn’t look anything like the Prince Nymph in the book or the flies that I saw in the bins at the shops. Elliot has the type of optimistic personality where he thinks that all his flies look good and will catch fish despite how deformed, or funky, the final product looks. 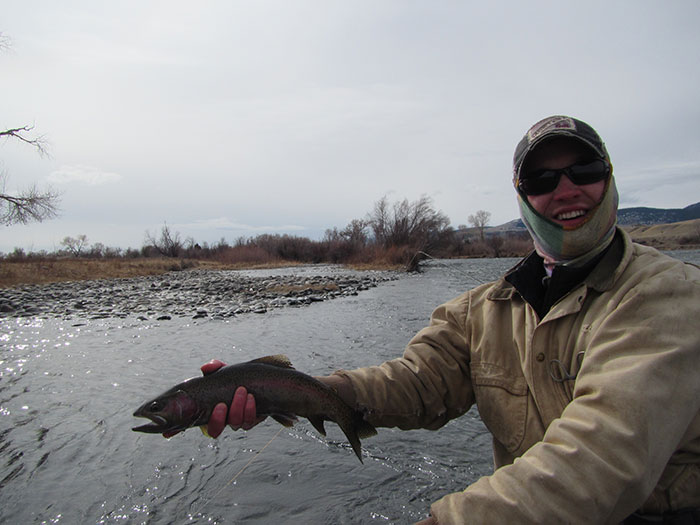 Elliot is all smiles after landing his first rainbow on a fly he tied.
Photo by John McKinnie

The Mega Prince is a great pattern on the Madison any time of year, but is most effective in the winter and spring months. I suggested this to Elliot as we geared up to start the day, and he mentioned that he’d just tied a Mega Prince the night before. (You can find a video on tying this pattern at the bottom of the post.) I examined his “attempt” at the Mega Prince, and it was far from the pattern I had just purchased at the shop in Ennis. Elliot’s fly had wings going in all directions, bright thread and peacock herl, and an extremely thin profile which made the nymph look like it had missed a few meals. 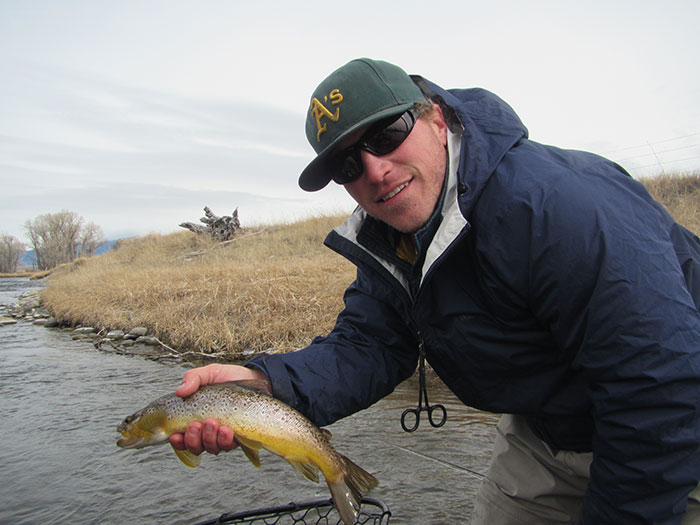 Craig got into the action, as well.
Photo by John McKinnie

I smugly remarked to Elliot, “It might work; might as well give it a try.” After just a few casts, Elliot had hooked into a beautiful spring rainbow, and he was thrilled! Not only did he land an awesome fish, but he caught it on a fly that he tied, as well.

Throughout the day, Elliot’s Mega Prince continued to fool plenty of healthy Madison River trout. Near the take-out, Elliot snagged a rock and he lost his pattern to the fishing gods. He had hoped to pin that Mega Prince on the bill of his hat to display proudly, but I think it was more fitting to lose it to the river. Elliot can now construct another unique pattern that I am sure will fool a fish or two! 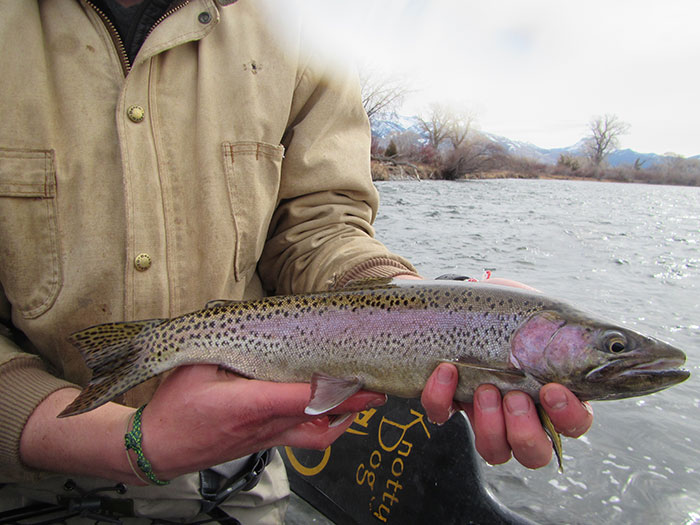 Elliot’s Mega Prince was the clear winner of the day.
Photo by John McKinnie