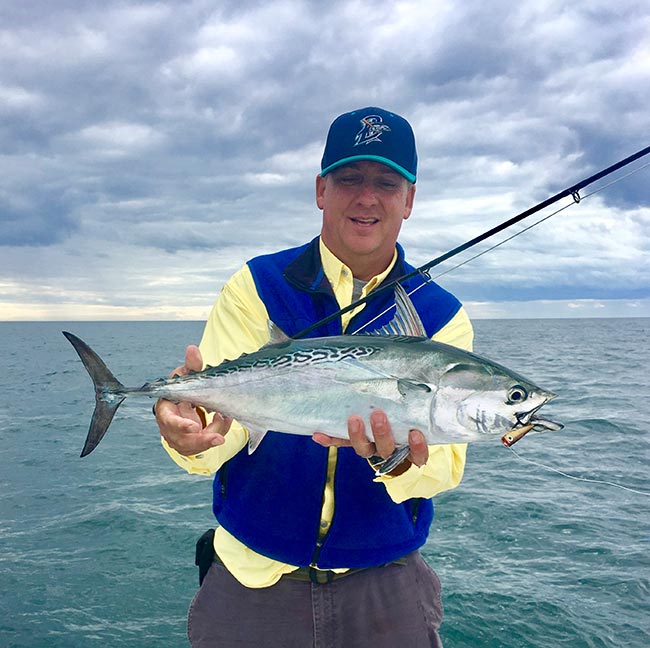 If you’re a fly fisherman, then you love seeing fish eat your flies, like when you’re casting dry flies for trout or poppers for bass. And sight-fishing for bonefish is considered one of the more exciting kinds of fishing. So how come when you come out to the saltwater to fish for false albacore, you use a sinking line and a weighted streamer . . . especially since an albie will hit a fly off the surface with even more reckless abandon than any of those other fish will? It baffles me. Too many anglers are told that they need a clear intermediate fly lines or a dark-colored sinking line to get albie bites. But it’s not true. I guarantee you that you can catch all the albies you want on topwater flies, and not miss a thing that you would have gotten by fishing with sinking lines.

There are a few things to look for and some things to be aware of, however. The one drawback is that, if you are one of those guys who likes to tell people, “We got on bait balls and caught fifty albies per day when we went to Cape Lookout!” this technique may not be for you. However, if the thrill of seeing a topwater bite from a 12- to 20-pound fish is something you want to experience, then read on. 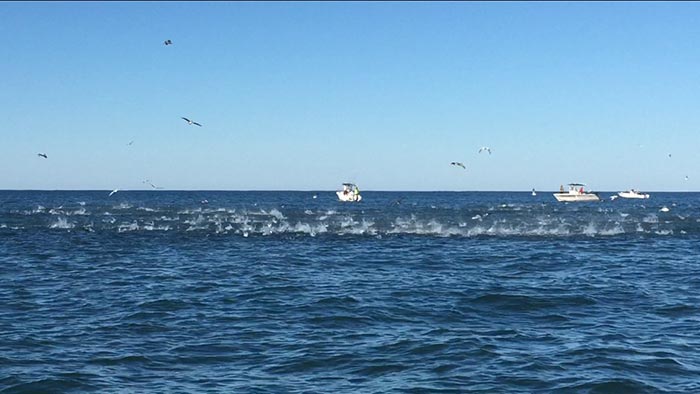 When albies are busting on top, a surface pattern will stand out from all the bait in the water.

First of all you need a quality floating line, something that won’t kink up on you when the water temperature gets below 65. If the only line you have is a “Tropical,” change that thing out. Get the quality “Saltwater” line. It won’t kink up on you. Next, I’d say stick with a 10-weight rod. While you can use a 9- or even an 8-, the wind is going to be pushing your cast around and the heavier line will do a better job for you. Add to that the fact that really big fish of over 15 pounds (20?) show with regularity off North Carolina. I have found that 9-weights are allergic to 20 pound false albacore. Finally, you need the right topwater fly, and there are basically just two. First is a Crease Fly tied on a size 1/0 hook, with a body that is about the size of a man’s ring finger or middle finger. Much bigger than that, and it gets ignored; smaller and they might not see it. Crease Flies are what I fish with more than 90% of the time. The other is any random old popper that I use when fishing behind trawlers. 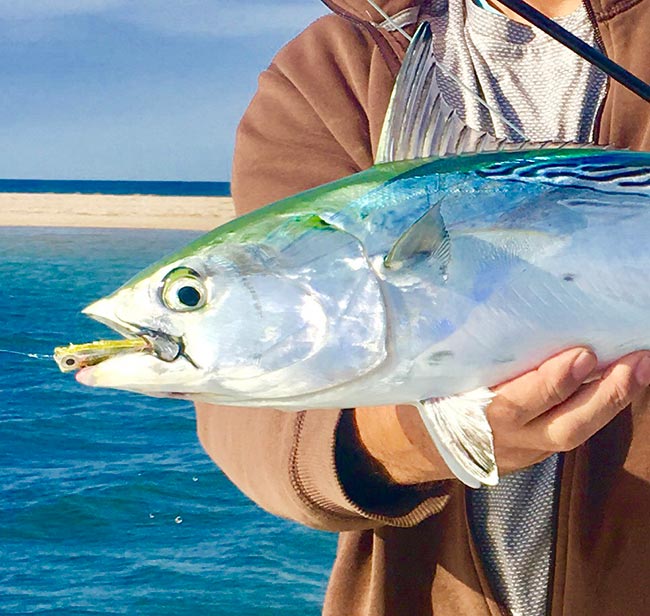 Look at how beat up that Crease Fly is, from all the albies it has caught.

So let’s say you are running the beach around Cape Lookout, and you can see that fish are feeding along the shore in about 15 feet of water. This is Situation Prime for Crease Flies. What often happens is that, as you move the boat into range to get a shot, the fish go down. It happens all the time. When it’s calm enough along the beach for the fish to be there and for you to get your boat in there, it’s also calm enough for them to be displeased with the sounds your boat makes. Cast a Crease Fly in this situation and when other people are disappointed by the fish moving away, you will get strikes. I believe this is because the fish, even though you might not see them, are still there, moving fast for the next feeding opportunity. Often you can see them streaking past the boat. The Crease Fly makes a nice noise, so they turn to look at it, see a minnow barely moving on top, and Blam! Fish on.

Perhaps the fish are in slightly deeper water. You pull up and make a cast into a melee of feeding albies, but your streamer gets ignored. There is so much bait that a small fly tied to look exactly like a glass minnow can’t get noticed. Again, the Crease Fly does the job. As it pops along on top, it sticks out like a bad song on your iPod’s “Road Trip Mix.” They’ll hit it usually as it is just sitting there between pops so don’t move it too fast. Get it in there, pop it with one handed pulls, and don’t move it out of the strike zone too quickly. When they strike, albies will often come right out of the water with the fly in their mouth. It’s pretty cool.

A final opportunity for topwater is the least obvious, but possibly the most exciting in terms of pure numbers. Fishing behind shrimping boats is a way to find fish around Cape Lookout on days when the fish aren’t feeding on top elsewhere. Boats pull up behind the trawlers, get in line, wait for the guys in front to hook up then take their turn. It’s traditionally done with a sinking line, either an intermediate or a fast sinker. The thought is that the fish won’t see the fly unless it gets down through the white water in the wake of the shrimper. Using a popper in this situation draws some exciting strikes to rival anything in fly fishing.

The fish slash at the fly from below, one after another. Many times you can see them as they come up in the clear water just off the wake. You don’t have to use your fancy Crease Fly or whatever fancy-head fly that’s being sold nowadays. Any popper with a foam head that can look like a dying finfish will get hit. Cast into the whitewater behind the shrimper, from one side. The fish will hit the fly in the white water, or along the edge, or when you least expect. But it will be right there and it can be amazing. Like, “Whoa, did you see that,” or “I can’t believe that!” Either way, I think it’s a lot more exciting than fishing streamers down behind a sinking line.

Capt. Gordon Churchill is a former North Carolina saltwater guide and the author of Fly Fishing the Southeast Coast from Skyhorse Publishing.