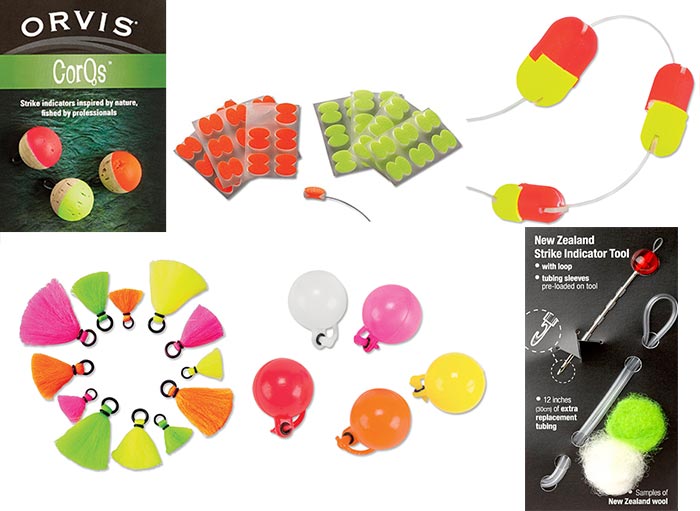 In recent years, anglers have been able to choose from an ever-increasing array of strike indicators—different in appearance, buoyancy, and how they attach to the leader—for all different types of fishing scenarios. For the most part they all work, but some work better than others in different situations. Here’s a primer that addresses the pros and cons of each style, to help you pick the right indicator for your needs. 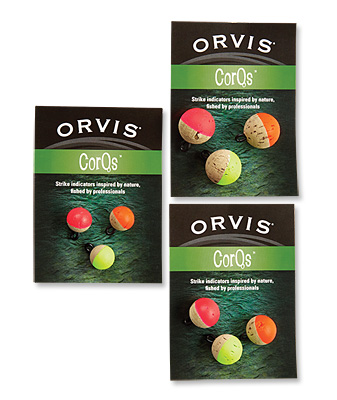 Cork
The first indicators were most likely made of cork, and there are still several options available in this style. Of course, they “float like a cork,” but they can also be heady and difficult to secure on the leader. Most advanced anglers choose a different option, but cork will always have its fans. 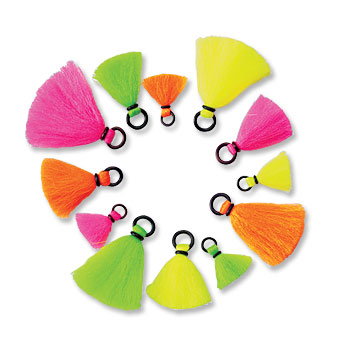 Yarn
Prior to the advent of “bubble-rig” indicators, yarn was the preferred choice. Yarn indicators offer great visibility and an acute sensitivity that the many popular indicators of today lack. The yarn is typically treated with a floatant of your choice and offers clear visual cues on what is going on with your flies under the surface. Yarn indicators remain the most subtle and sensitive indicator option on the market.

Casting and presenting flies with yarn is easy, as well. The weight of yarn is negligible, which causes your cast to remain as fluid as possible, given the weight of nymphs. It lies on the water with minimal disturbance and is ultra-sensitive. I find a yarn indicator system to be great when fish are taking flies very delicately, especially on tailwaters. It works well with small flies and is very good when fish are eating softly in the middle of the water column. You can even use yarn with hard-to-see tiny dry flies, such as Baetis, trico, and midge imitations.

Poly yarn was the industry-wide selection for many years, as coloring the material was easy and anglers could trim down the yarn with small scissors to whatever size they wanted. Poly-yarn indicators come in just about every color, from bright colors to muted tones. In recent years, some anglers have borrowed a page from their New Zealand brethren, using wool-fiber indicators. The New Zealand Strike Indicator company came up with a brilliant product, with a cool little tool that uses small rubber tubing to attach the colored or plain colored wool to your leader without hinging your leader. It’s easily adjusted on your leader and reusable.

Another, often not-talked-about advantage of these types of indicators is the minimal resistance they put on your rig while you’re fighting fish. While your indicator is under the water being ripped around by a fish, it adds stress to the tippet and knots below. A yarn or wool option cuts through the water with minimal additional pressure.

On the down side, yarn indicators are limited by their buoyancy. They can be frustrating to use when you’re fishing bigger and heavier flies. Yarn often cannot support the weight of the nymphs below, and so they sink, thus negating the purpose of having an indicator in the first place. Yarn indicators also don’t do to well in fast and broken water. 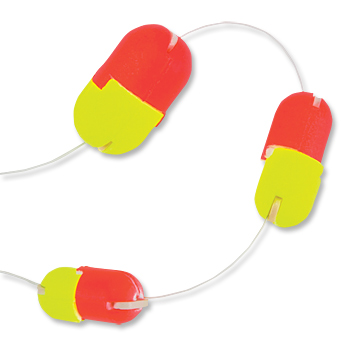 Foam
Closed-cell foam offers similar advantages to yarn in that it is light and easy to cast, as well as offering a delicate presentation where important. One of the common products is the foam “pinch on” incicator that attachs like a folded sticker to your leader. They are are quite inexpensive, easy to attach, and float much better than yarn without the use of floatant. To deal with heavy water or particularly heavy flies, you can simply pinch on one or even two more. They are typically painted in hi-viz colors. The downfall of the pinch-on is that they are not really adjustable. Pealing them off can leave a stick residue on your leader and sometimes some remnant sticker. Plus, they do tend to fall off the leader, and you often see them floating in rivers, which is a bummer, as they are certainly not biodegradable.

Another foam option is the “Turn On Strike Indicator,” two molded-foam pieces that cleverly attach together on your leader using a mini dog-bone shaped rubber band. It floats very well and is available in a myriad of colors. It also gets high marks for not hinging your leader and its easy adjustability. There aren’t many shortcomings of the TOSI, but getting the rubberband in place can be challenging for some or when your hands are cold. 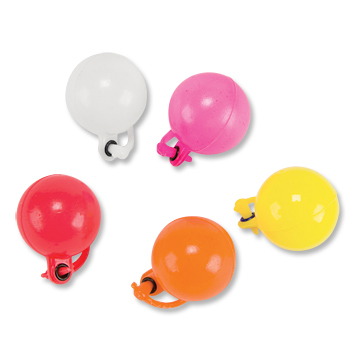 Bubble Rigs
At some point in the early 2000’s, the “Thingamabobber” came on to the scene. I recollect the day I used one the first time. I was guiding in Colorado at the time, and my boss gave me two for a trip I had that day. I laughed. But by the end of the day, I was sold. Thingamabobbers are sensitive, highly visible and can float a brick.

The Thingamabobber is a molded-plastic hollow ball. The captured-air concept was apparently borrowed from an era when small balloons were used as strike indicators. It’s easy to attach to the leader and makes for a pretty pleasant nymphing experience. The Thingamabobber is offered in several colors and sizes for all types of fishing scenarios and the Black and Glow-in-the-Dark models have a cult following because they offer extremely low-profile options for spooky fish.

I don’t think the importance of the Thingamabobber is truly understood. It had a ripple effect and played a big role in getting more people to try nymphing. Its biggest strength is by far the ease of use. I strongly believe that it has resulted in increased success for both guides and anglers and in some way probably helped the sport grow through just simply putting more fish in the net. It spurred a few direct knock-offs which is a sign of its relevance.

But even the strongest candidates have weaknesses. The attachment method leaves a kink in your leader. You can straighten your leader after use, but there are typically some abrasion marks showing some damage to the leader. Originally, placement was limited to the top third of your leader, and if you lowered it too far, the indicator wouldn’t stay put. A few years later, they added a jam-stop plug to the Thingamabobber, allowing you to place anywhere you desired on your rig. But often the plug doesn’t hold, and it can be a line-catcher and tangle waiting to happen. Some people elect to simply cut it off with their nippers. In recent years, I have heard of some guides and industry people claiming that sensitive, smart fish can feel the resistance of the indicator when taking the flies and that the size of it can cause some noticeable resistance. 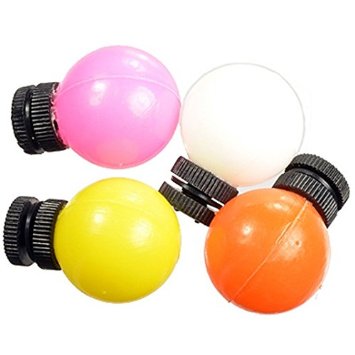 Recently, Tim Rajeff created the Airlock Indicator, which took the inspiration of the Thingamabobber and improved on the attachment to your monofilament. This device has a small plastic screw nut at the top that you can unscrew, revealing a threaded post with a slit in it. You simply place your line in the slit and screw down the nut. This compresses the tippet/leader into place, and away you go. You can easily back off tension of the nut and move the indicator, lock it back down, and fish at a different depth. The real benefit of this item is that it doesn’t kink the line, or only very mildly.

Sighters
For those who prefer not to use the suspension devices listed above, the advent of “sighter” material has has been a great leap forward, especially for those anglers using European nymphing techniques. The material is colored monofilament, usually opaque. I have seen it in Yellow, Red, Pink, White, and Chartreuse, though I am sure that other colors exists. There are also pre-made sighters with loops at each end.

You attach the sighter to the leader, and then the tippet extends from the other side to the flies. One variation of the sighter, “the slinky,” looks like a phone cord. (The slinky can also be made from Dacron.) The sighter can be treated with floatant and will float with the right amount of fly weight. Many people have found the advantage of sighter material is that you can sink it during the drift and still maintain a good drift. This allows you to adjust the depth mid-drift without fumbling with a device. Further, you to not have to change the depth of the indicator when switching runs.

Sighter material falls short when you’re trying to make long drifts, because you can’t have a lot of slack in the system. The longer leaders required with sighters can be difficult for some to cast without proper technique and equipment.

There is no doubt that bobbers have come a long way, even getting renamed “strike indicators” by us proud fly anglers. Whether you use them or not, they are a tool in the box. We cannot deny the amount of influence, accessibility, and success that can be attributed to the devices. With so many choices, you’ll need to experiment to find which work best for you in which fishing scenarios. One thing is for sure: the indicator is here to stay.

Jesse Haller is a Product Development Specialst at Orvis, in charge of flies and gadgets. He’s also a former guide and tournament fly fisherman.

8 thoughts on “Pro Tips: How to Choose the Right Strike Indicator”