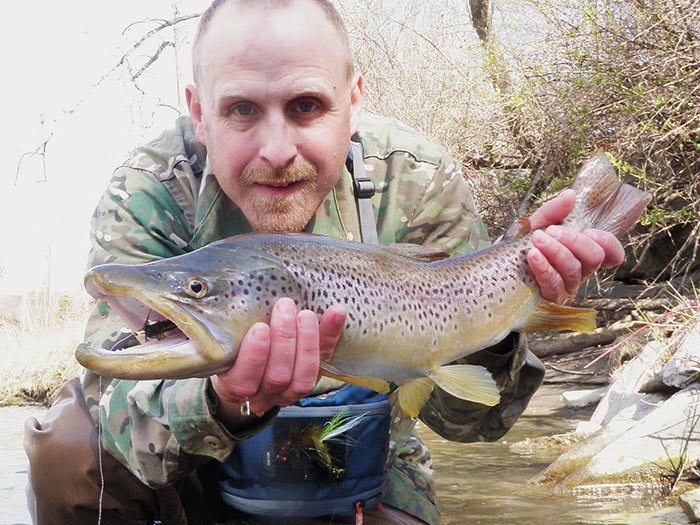 Drew Price shows off a 24.5-inch beast that fell for a dead-drifted streamer.
Photos by Drew Price

During runoff, trout streams tend to be a bit on the high side, and the water is cold and discolored. These can be tough conditions for fishing, but it can also be one of the best times of year to get into larger fish if you use the right techniques. I suggest dead-drifting streamers if you want to catch bigger fish. This technique has proven itself deadly in past years. On one April day in Vermont, I landed five trout with a combined length of 99.5 inches, including a 24.5-inch toad of a brown.

The technique itself is fairly simple: all you have to do is dead-drift big streamers through likely pockets. Essentially this boils down to working flies through slicks in faster water, slow seams near faster current, and other deep (or not so deep) holding spots. One of the most productive places to use this technique is the head of a pool, especially when there is some slow water near the main flow. Bigger fish will hang out in areas like this because they have a constant supply of food and don’t have to expend much energy to get to it. Big trout, especially big browns, are lazy, and if they are able to find a spot where food is delivered to them, they will definitely take advantage of that. 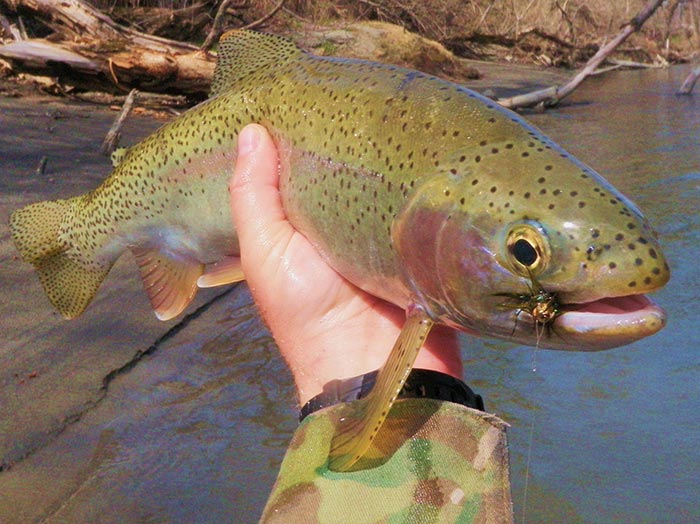 A Conehead or Beadhead Woolly Bugger drifted along the bottom induces even sluggish fish to feed.

Another favorite location is the inside of bend pool. Once again, the mobile buffet will provide easy pickings for trout while allowing them to hold without burning off the calories they are trying to pack on after the winter. Deep, boulder-filled runs afford trout holding spots in faster water. A deep, slow slick in fast water can be excellent, as well; this past weekend, a location like that gave up three big browns in quick succession.

The core of this method is to drift streamers through these areas without imparting much action. Remember that prey items this time of year are not very active. Baitfish, crawfish, and insects are all cold-blooded and are not moving quickly at all. A crawfish later in the season can move rapidly across a pool in short, fast bursts, but this time of the year that same animal might just drift with the current if it gets dislodged. I employ two different strategies for dead drifting streamers: high-sticking and working across the current. For me both of these techniques require a heavy fly to help get it where I want it. Using split shot or other weight on the leader will also work, but I feel that you have a more direct connection to the fly without anything else on the leader. 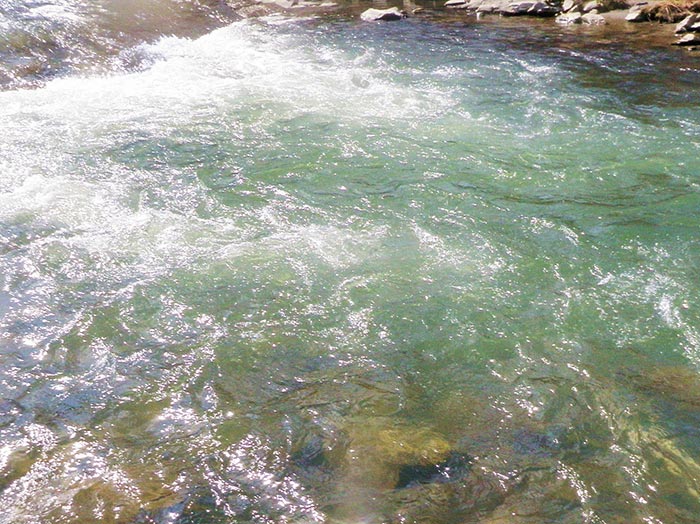 This deep slick in the middle of some faster water gave up three good trout.

Cone- and beadheads (especially tungsten), lead eyes, and some of the new Fish Skull products will help get the fly down to the fish fast. Since I tie my own, I also tend to wrap some lead wire on the hook shank, as well. It helps to hold the bead or cone in place and gets the fly down even faster. The venerable Woolly Bugger tops my list of flies to use this time of year followed by Zonker and Matuka-style flies. Olive has been my most productive color, but black, brown, and white flies produce very nicely, too.

Gearing Up
Typical trout gear will serve well for these techniques: A 5- to 7-weight rod is fine, with longer rods being more effective in bigger water. Just make sure that the rod you are using can handle heavily weighted flies. I have a preference for muted colored lines, but with discolored water this requirement isn’t as important. The leader you use is a critical part of the set up. I prefer a long, skinny leader for this time of the year. Start with a 7.5-foot 2X leader and then add about 3 or 3.5 feet of 3X or 4X Mirage fluorocarbon tippet. This set up will let the fly get deep quickly and keep it there. The fluorocarbon tippet is essential; it sinks fast, disappears in the water, and is very abrasion resistant. I proved that last part over the weekend. After releasing one of the fish, I looked at the leader and noticed just how tattered it was, but it had still held and let me land the fish. I replaced it, but I know that had I been using nylon, the odds of landing that fish were against me. Tie your fly on with a non-slip mono loop knot. That lets the streamer move freely with the currents. 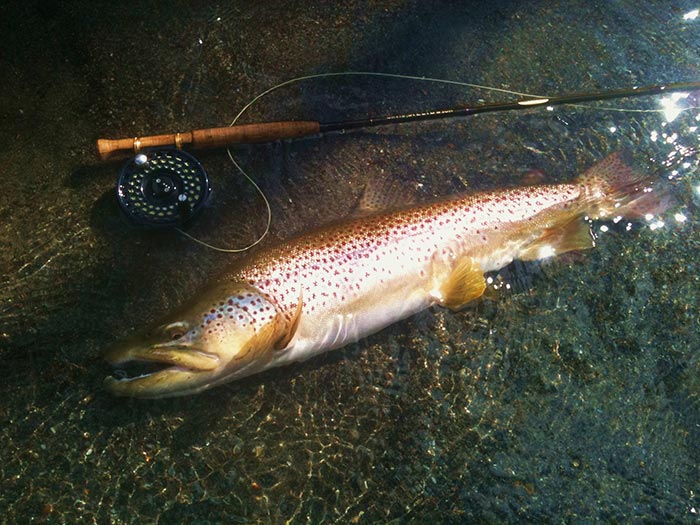 When you’re drifitng big streamers, make sure your tackle can handle big trout.

If you nymph quite a bit, then high sticking is probably already in your bag of tricks. When you are high-sticking a streamer through a likely spot, you don’t need much line out of your rod tip. Your cast probably won’t be much more than 10 or 15 feet, and sometimes it is less than that. You keep the rod tip high and tumble the fly along the bottom, making sure that you have a tight line. Follow the drift of the fly with your rod tip as it drifts through the area you are working. Your drift won’t be too long—maybe 12 to 15 feet at most. When you feel a bump, just raise the rod tip—it could be a fish. If you have a tight line and a sharp hook, the fish will often hook itself, but raising the rod tip will set it nicely.

Working deeper pools is a bit different. The fly needs to get down deep, and the best method to do that is to cast the fly upstream of the area you want to work it through. Let the fly sink by mending the line back upstream and continue mending as the fly drifts in front of you. Get that fly deep and keep it there. Keep a tight line so that you can feel what the fly is doing. You want to feel the fly tick bottom on occasion. If it isn’t doing that, then you may need to do one of two things: add weight to the leader or lengthen the leader. My preference is to lengthen so that I keep that direct connection to the fly, but there are times it is unavoidable to add weight to the leader. 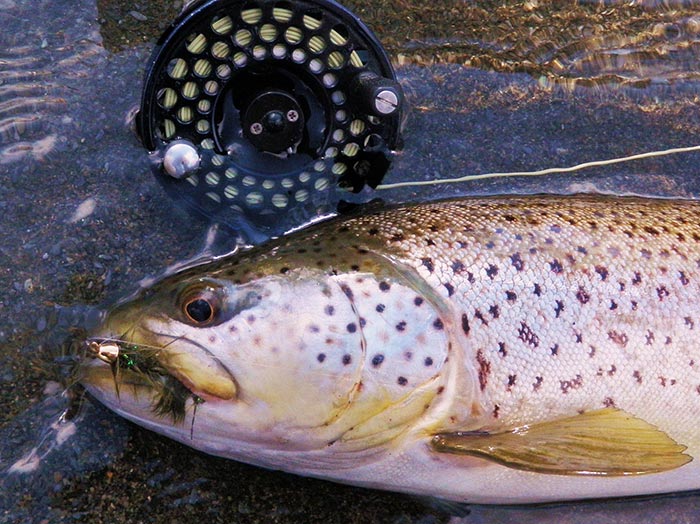 An Olive Conehead Woolly Bugger is Drew’s pattern of choice.

While these techniques really keep the fly from moving around a lot, imparting a bit of motion can trigger strikes. Working the rod tip just a bit in either of these situations can elicit a take from a fish. At the end of a high-stick drift, I often pop the rod tip up a couple of times. Last weekend, I did just that and watched a 19-inch brown explode off the bottom and pounce on the fly. Moving the fly during the drift can have similar results. If you have made a longer cast in deeper water and the fly has reached the end of its drift, let it hang for a few seconds before starting the retrieve. Sometimes that can trigger a strike, as well.

Runoff can be one of the best times to get into some of the finest trout of the year. Dead-drifted streamers provide easy meals for ravenous trout and it is worth keeping this technique in your bag of tricks. One last piece of advice for using these methods: bring a camera!

Drew Price lives in Northern Vermont and is the owner and operator of Drew Price Fly Fishing. He fishes Lake Champlain and surrounding waters targeting carp, pike, bowfin, gar, bass and other species (even the occasional trout).