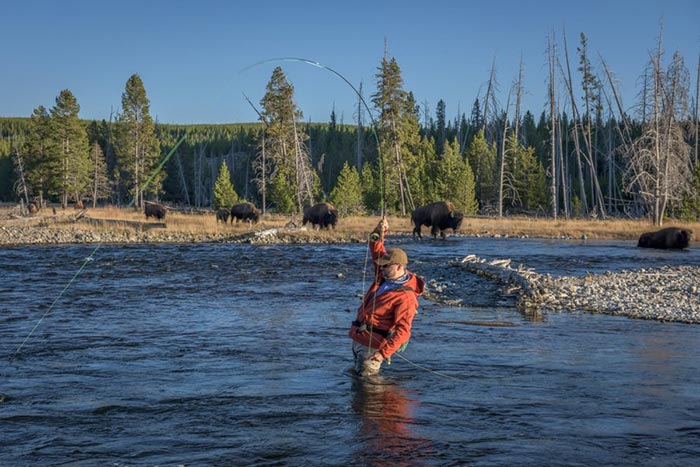 The crowds are gone in October, but the trout are on the move.
Photos courtesy Montana Angler

October is when we really see the seasons shifting here in Yellowstone Country. While we typically get at least some warm, Indian summer days, chilly weather and sub-freezing mornings become the norm. October is the definitive big fish time in Yellowstone National Park. Migratory fish are moving out of the lakes and large rivers and are more accessible to the angler. Outside of the Firehole River, nymphing becomes the most effective technique by far. For a certain breed of angler, the dark, snowy days of fall are something to look forward to all season. Let’s take a look at the best options to find a big October trout in the park.

Madison River
Fishing the fall run on the Madison River as large fish move out of Hebgen Lake is a yearly tradition for many. Both rainbows and browns between 16 and 22 inches pour out of the lake and into Yellowstone Park during October. The two ways to target these fish are nymphing and swinging streamers. You will observe many folks swinging streamers at these fish in the same manner that one would target steelhead. This involves working a run from the top down, taking a step after each cast and slowly covering the entire run.

When nymphing, I prefer to use a stonefly nymph trailing a small mayfly nymph. The most important thing, regardless of method, is locating the fish. These trout are lake dwellers, so they prefer to hold in as deep and slow water as they can find. Targeting these migratory trout is not for everyone. This is a game of quality over quantity. You’ve got to go out there and put in your time in search of the big boys. If you hit it right, the fishing can be spectacular. On the other hand, you have to be prepared to withstand bad weather and slow fishing for the chance to have one of those magical days. 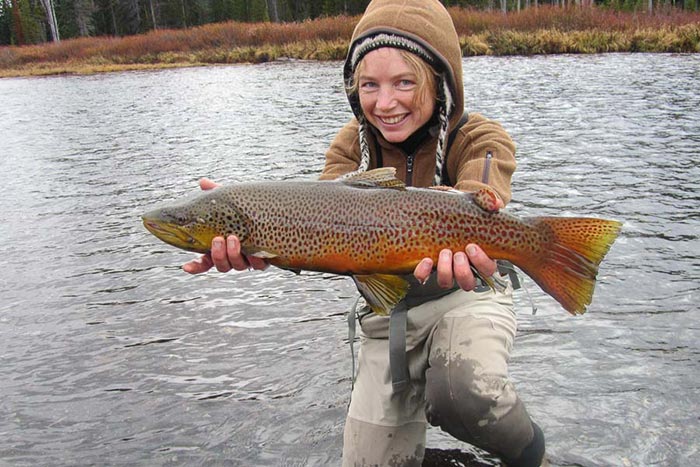 Big, October browns are the real trophies of the season.

Firehole River
Fish running out of Hebgen Lake have access to the lower mile or so of the Firehole River before they are blocked by waterfalls. Fish this water just as you would the Madison by deep nymphing or swinging streamers. Above Firehole Falls, the river offers Octobers’ best dry-fly fishing. Blue-winged olives will be the main fare with hatches of White Miller caddis on warm days. Come prepared with a few midge patterns, as well. As always on the Firehole, Swing Soft hackles when you can’t find any fish rising.

Gibbon River
Hebgen Lake fish also have access to the lower section of the Gibbon River, below Gibbon Falls. This gives the angler about five miles of water to explore. The Gibbon is a small river, so swinging streamers can be tough. But nymphing is very productive if you can find the runs where the big, migratory fish hang out. The resident-fish count in this stretch of river is not especially high, so if you are seeking dry-fly fishing or big numbers of fish, head to the Firehole instead. 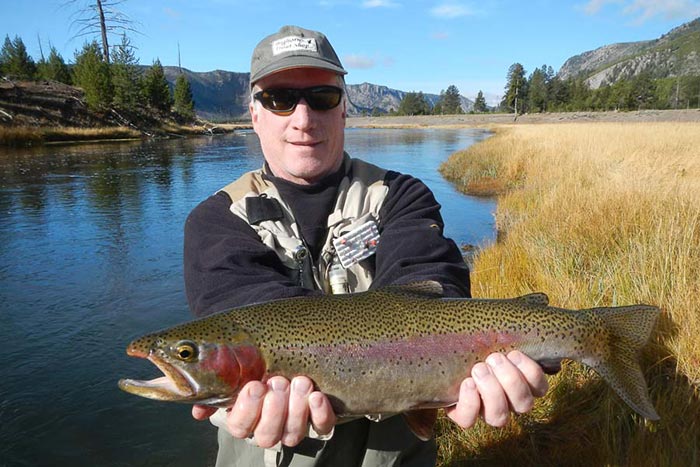 Big Hebgen Lake rainbows migrate up the rivers, as well.

Gardner River
The Gardner is a good October option because it has an excellent population of resident trout with a few larger, migratory fish mixed in. These migratory fish are moving up out of the Yellowstone River, so they are neither as large nor numerous as the fish moving out of Hebgen Lake into the Madison drainage. However, they are present in the fall and provide a nice surprise. Nymphing with stoneflies and attractors is your best bet most days, especially if you want a chance at one of the bigger fish. Good hatches of BWOs are common, especially below the Boiling River. This stretch can rival the Firehole at times for the sheer number of fish feeding on the surface. The Boiling River warms the water substantially, so staying below its influence is a good bet on cold days.

Yellowstone River
The Yellowstone River in the Grand and Black Canyons can be a good option to beat the crowds of the Madison Drainage. While there are no big migratory fish to chase, the cutthroats here are abundant. A big cold snap will shut fishing down, but the river will fish well during warmer periods. Terrestrial and attractor fishing is over, so you will be stripping streamers and watching for the blue-winged olive hatch. Cutthroat trout tend to short-strike streamers often, so avoid something with a long tail. Streamers with more than one hook are not allowed in the park, so a “swinger style” streamer with a single hook is my choice. 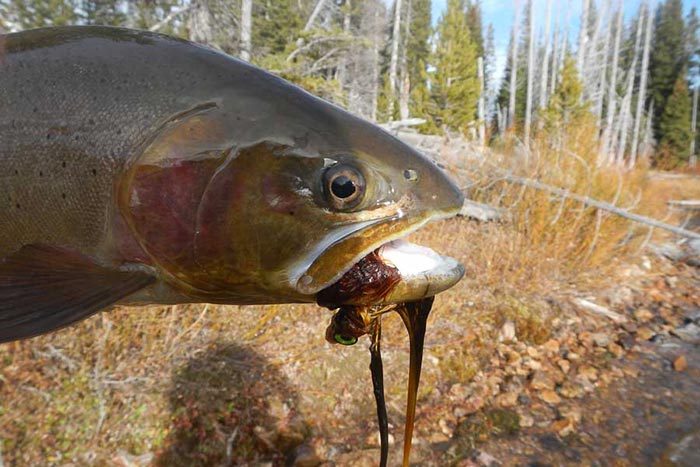 The streamer bite in fall can be fantastic.