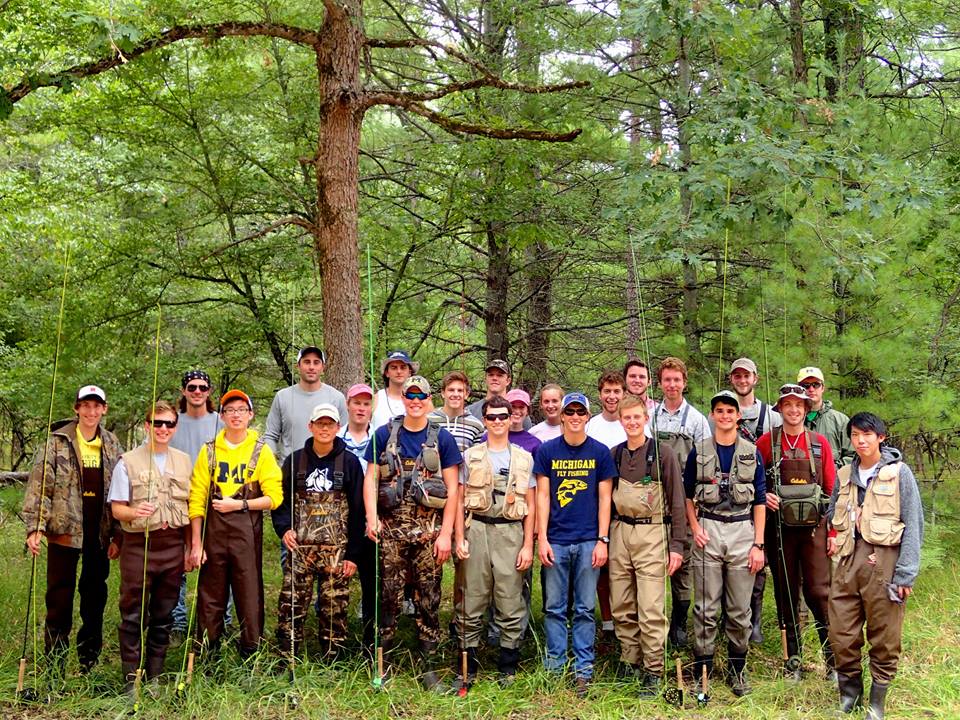 The 2014-15 University of Michigan Fly Fishing team now sports some 40 members (not all shown).
Photo via Facebook

[Editor’s note: I saw a post by Austin Elliott on reddit, in which he talked about his fledgling college club at UM-Ann Arbor, and I asked him to write a little about how the whole thing came about. Here’s what he sent me.]

In the spring of 2013, a close friend, Parker, and I started planning a Spring Break backpacking trip. Unbeknownst to our traveling companions, we expected to fish a lot, as well, since we were itching to get our swing back on after a typical Michigan winter. We were so inspired by our week in the Ozark Mountains, that we decided to hatch a fly-fishing club at our school, the University of Michigan.

Through word of mouth, we discovered many people interested in helping to start the club, including a professor who agreed to be our advisor. We scrambled to work through the university red tape, reached out to other universities with clubs, and talked to local and national fly-fishing organizations for tips. After a long Sunday of posting flyers around campus, the news was out and a new University of Michigan club was born.

The club’s first meeting exceeded our expectations; we discovered that many of the 43,000 students on campus shared our passion for fly fishing. We quickly established a Facebook group to keep in touch with members over the summer and were grateful to Mike Schultz of nearby Schultz Outfitters for holding some awesome clinics followed, of course, by fishing.

The club’s first full semester started in Fall 2013 with Mike Mouradian from Trout Unlimited’s Ann Arbor chapter generously putting on a beginners’ clinic. Following this, we had a successful trip to the Pere Marquette River, fishing one of the best salmon runs in recent memory, and an equally unsuccessful fishing trip to the Au Sable River, which proved to be as technical as ever. Three lucky club members headed to the Pere Marquette to represent the University of Michigan in the fall Collegiate Steelhead Tournament, while others, like me, were held back by something called school. If I heard correctly, I believe Ohio State University still owes us dinner after not showing their faces at the pig roast afterward! 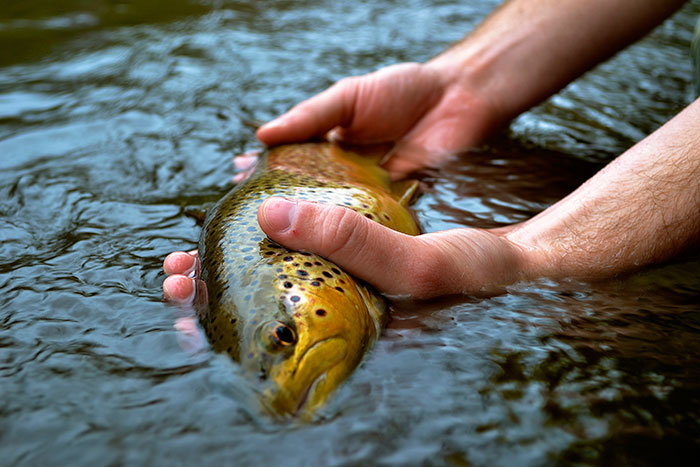 Although the team failed to land a steelhead in its first full-team attempt, a couple PM browns.
Photo courtesy Austin Elliott

Our terrific fall start was followed by an especially grueling winter that put a significant damper on the fly fishing but not the club. The club held a few more fly tying sessions, weeks of meetings, and a trip to “Stockerfest,” before the essential tournament of the year, the spring Collegiate Steelhead Tournament, was upon us.

Representing our club’s first full team, seven members departed on a Friday afternoon, with a one car topped by a canoe and another stuffed with gear for what we were sure would be a sweep of the prizes. After checking in at the local hotspot, we prepared for battle. A mess of fluorocarbon spools was removed from packs, and the rigging began. Each team member constructed a different rig to test what the steelhead were hitting, and we picked up a few tips through messages exchanged with Mike Schultz.

I barely slept the night before, perhaps due to nerves, excitement or that we had decided to leave the heat off. The team was ready to roll at the crack of dawn, hoping to get on some early gravel. We sent four down the river in a small canoe, and three of us hit the path. We were amped for a day full of chrome. The morning looked promising, after one small fish was hooked and lost, but the next was landed.

The land team spotted one of the biggest browns in the river, and possibly the winning hen, but neither was landed. In the afternoon, I hooked a nice 17.5 inch brown and landed it, and the team member who lost both the brown and the hen ended up with his consolation prize, a four-inch rainbow. The team in the canoe faired even worse, with zero steelhead and only one smaller brown landed. Our dreams of crushing the opponents were all wet, just like us, because it poured the entire afternoon.

We didn’t win any prizes. In fact, we didn’t even get on the board with a steelhead, but it was a landmark fishing trip. It was the first competitively sized team fielded by the University of Michigan Fly Fishing Club, the first time some members had fished for steel, and the first time I have been okay with losing.

With our current team, I have no doubt the club is now a permanent resident at the University of Michigan. I believe that it will continue to grow and get people involved in the sport, conservation and exploring the world. Cofounding and running a club has been the defining part of my time at Michigan, and one of the most fulfilling experiences of my life thus far.