Most fish lost in fly-fishing are lost either at the moment you strike or when you attempt to land them. Playing a fish on a fly rod is a relatively simple matter of making the fish work against the spring of the rod until the fish gets tired.

Striking a fish means tightening the line by raising your rod tip. Most fly hooks are of fine diameter with very sharp points, so the strike requires very little force—in fact, in many instances fish will hook themselves.

Striking with a fly rod should be a firm, immediate reaction to a fish that has visibly taken your fly, or an unseen fish that you have felt telegraphed along the rod. The only thing a fish can grab objects with is its mouth, and if that thing doesn’t feel just right he’ll eject it quickly. Other than Atlantic salmon, which aren’t feeding anyway, a fish will eject an unwanted object within a second. Atlantic salmon may take flies all the way to the bottom before letting them go.

Some large fish—such as salmon, tarpon, and large trout—move slowly toward a fly, almost as if they were in slow motion. Make sure that you wait until you see the fish take your fly before striking. However, there is no need to hesitate in striking unseen fish, because that twitch you feel along your rod or see in your line means that something has grabbed your fly.

How to Strike
The strike is performed by pinching the fly line tight with your hand and moving the rod tip until you feel the hook hit home. In most cases, you’ll be stripping line by pulling it with your stripping hand through the fingers of your casting hand. To strike, merely pinch the line with your casting hand and raise the rod tip at the same time. If you don’t pinch the line, it will merely slip through the guides of the rod and no force will be applied to the hook point.

How hard do you strike? That depends on a number of variables. With a heavy tippet, something over 6-pound test, you can strike fairly hard without popping the tippet. With a lot of slack line on the water, you may have to strike hard in order to take up all that loose line. On a long cast, it also takes a harder strike, because moving sixty feet of line takes a lot more force than moving fifteen feet of line. 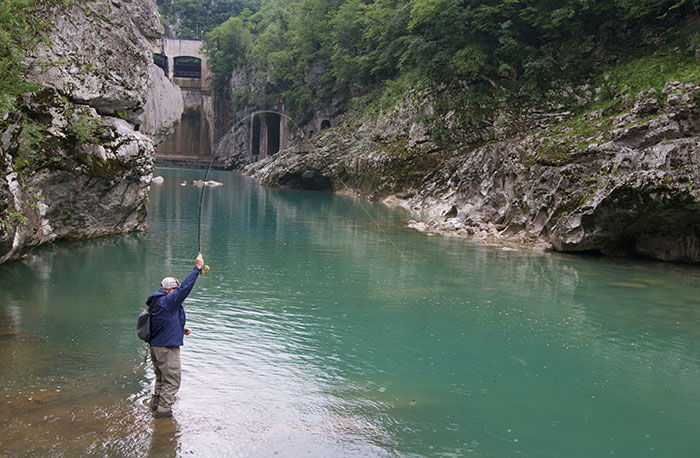 The classic “trout set” involves simpy raising your rod tip to the sky to come tight to the fish.
Photo by Sandy Hays

The greater the arc you move your rod tip through, the more forceful your strike will be. Slack line on the water may require you to raise the tip from 9:00 to 12:00. If you’ve been using a high rod technique to avoid drag, you may have to go back as far as 1:00.

There are times when fish will hook themselves. A fish that takes a wet fly on a quartering downstream cast and a tight line will most often hook himself; all you have to do is gently tighten the line. In fact, if you strike too hard on a downstream cast you’ll often pop your tippet. If you’re moving a fly toward you quickly, as with fishing a streamer in still water, the fish has to rush the fly, getting hooked in the process.

Bass, pike, and most saltwater species require a fairly hard strike. The hooks you use for these species are large, and large hooks require more force to set them than small hooks. These fish also have bony mouths, which require some force to penetrate. Some of the real big bony ones may require a second and third strike to ensure good penetration. With some saltwater species you’ll have to haul with your stripping hand as well as using the rod tip. Several short, quick strikes are always better than a mighty heave.

There are times when you need a gentle strike. Big fish and light tippets require just a hint of a strike, barely enough to tighten the line. With light tippets you’ll be using tiny flies anyway, which don’t need much muscle to penetrate. I’ve often heard people say that they never strike with small dry flies, size 20 and under, but unless there is some tension on the line you’ll never set the hook. A tiny fly fished downstream may be set by the tension of the current on the line, but if you’re fishing upstream you must set the hook, even if it’s a barely perceptible motion.

Other Methods
If you’re heavy-handed and sometimes break off fish when striking with light tippets, you can use the slip strike, which uses only the friction of the fly line against the guides. As you raise the rod tip, don’t pinch the line but make an O with the thumb and forefinger of your line hand, letting the line slip through as you raise the rod tip. The tippet can’t break because the tension on the line is so slight.

If the fly is directly downstream from you, try to use a sideways hooksetting motion rather than an upward one. Using a straight upward motion of the rod may pull the fly right out of the fish’s mouth. Atlantic salmon fishermen avoid “hanging” the fly below them for this reason. If a salmon is going to take they’d rather have him do it on an across-stream presentation, where he will be securely hooked in the hinge of the jaw.

I’ve heard fishermen talk about the relative pros and cons of where in his mouth a fish should be hooked and how they strike to get the hook in the upper jaw or the hinge or whatever. So far as I can see, we have no control over this, and hooking anyplace in the bone of his mouth is OK with me. If, while you’re playing a fish, you see that he is hooked on the skin outside his mouth, be very gentle when playing and landing him.

Fish are often foul-hooked on the top of their heads or dorsal fins or even their tails. This usually results from a fish that rose to your fly and refused it at the last moment. You see him break the surface so you set the hook, just as he begins to roll under the fly. If this happens frequently you should change your fly pattern or presentation very slightly–something isn’t quite right.

6 thoughts on “Pro Tips: How to Set the Hook”