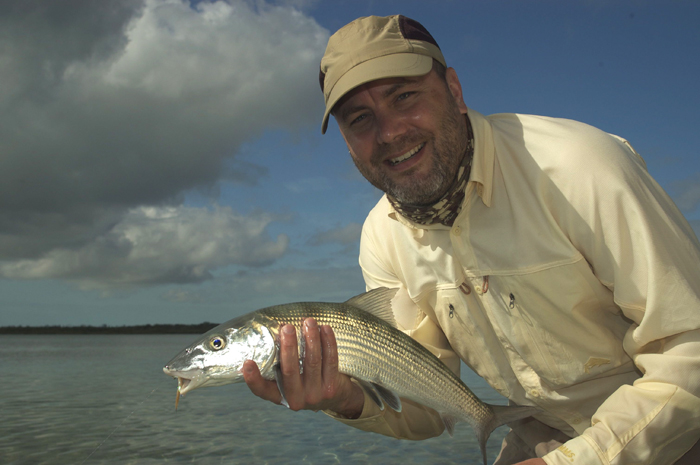 This South Andros bonefish was the result of lessons learned in Belize years earlier.
Photo by Sandy Hays

Anyone who reads fly-fishing magazines and websites knows that the bonefish is one of the real prestige species for saltwater anglers, but, despite the fact that I edited one of those magazines, I’d never even seen a bonefish in person until I was in my 30s. My whole fly-fishing life had been spent chasing trout and salmon. Aside from a few trips for striped bass in the Northeast, I hadn’t focused on fishing the salt at all. Finally, I figured it was time I remedied that situation, so I started to look into making my first tropical saltwater excursion.

Everyone I talked to agreed that Belize is the place to go if your main goal is simply catching a few bones. There aren’t a lot of trophies down there, but there are so many fish that you’re almost guaranteed to get tons of opportunities to hook up—weather permitting, of course. I headed south for a few days at El Pescador on Ambergris Caye.

On my first night in Belize, I sat around with the other anglers staying at the lodge, many of whom had a lot of experience with bonefish, and I tried to ask as many questions as I could about what I should expect. They gave me some pointers, explained to me the many pitfalls to be avoided, and assured me that I would do fine. As it turned out, they were right, and I did catch my first bonefish the next day.

But before I held one of those silver bullets in my hand, I made just about every mistake they had warned me about. Trial and error is usually the best way to learn anything, but I seemed to take that concept to the extreme. I hope that my errors, spelled out below, will serve as an example, so you don’t have to waste your own precious time in the tropics. Here’s what I learned, the hard way, on my first day on the flats:

1. Be prepared to cast at all times

The first time I stepped up on the casting platform, my guide, Sandro, explained to me that I must always be ready to cast—which meant that my line should be neatly coiled at my feet, the fly should be in my hand, and my eyes should be on the water looking for fish. This seemed easy enough. However, we didn’t spot a fish for about the first hour, and my vigilance began to wane. There was a pretty stiff breeze, and it eventually blew my neat coils of line around the casting platform. When the line would come too near my feet, I’d give it a little kick so I wouldn’t accidentally step on it when it came time to cast.

Finally, Sandro called out, “Two fish, eleven o’clock, twenty-five yards!” and I burst into action. I spotted the fish, made two quick false casts, and then tried to shoot the rest of the line. As I watched in horror, a bird’s nest of fly line as big as my head came flying off the casting platform and whacked against my stripping guide. My fly crashed to the water about 15 yards short.
Bonefish: 1, Phil: 0

2. Set the hook with a strip strike

Even before the boat left the dock on that first day, I was sure that I would set the hook incorrectly on the first fish. Everyone I had talked made sure to mention that a strip strike is the only way to drive the hook home on a bonefish. But all those years of trout fishing had conditioned me to raise my rod tip when I felt a fish, and I figured that, no matter how many times I told myself not to, I’d probably succumb to that instinct at least once. The next time we saw an approaching fish, I made a good cast, retrieved fly erratically, and felt a sharp tug. Sure enough, the second I felt the fish, I threw my rod tip to the sky. From the back of the boat, Sandro shouted “No!” as the line went limp.
Bonefish: 2, Phil: 0.

3: Don’t strike until you feel the fish

After that mistake, I began to chant a little mantra under my breath as I scanned the water: strip-strike, strip-strike, strip-strike. . . . So I was totally prepared when we spotted the next fish. I made a decent cast and saw the bonefish turn. The words began to pound in my head—strip-strike! strip-strike! strip-strike!—as the fish approached the fly. Suddenly, I saw the fly disappear, so I let loose with the mother of all strip strikes, yanking on the line as if I were trying to start a cranky lawnmower. Unfortunately, I pulled the fly right out of the fish’s mouth, thereby scaring the bejeesus out of the fish and sending it scurrying across the flat at light speed.
Bonefish: 3, Phil: 0 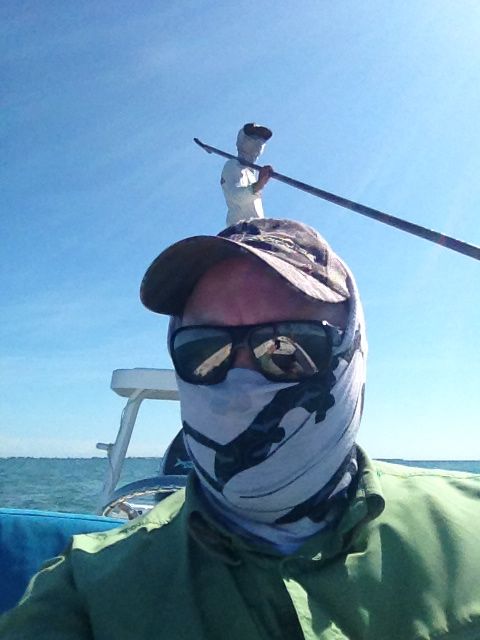 My recent trip to El Pescador was a fun return to the scene of my previous failures.
Photo by Phil Monahan

4: Keep your line away from obstacles during the fight

At this point, I didn’t believe that there was anything else I could do wrong; surely I’d hook up on the next fish. And I was right. Sandro spotted another fish, I did everything right, and I finally felt the adrenaline rush that I’d read so much about. I knew that I had to clear my line and get the fish on the reel, so I focused on making sure that the line was not knotted and not wrapped around anything in the bottom of the boat. As the last few yards of slack came up off the deck, I turned my attention to the fish for one second—just long enough for the final foot of slack to make a loop around the handle of my reel. With an audible pop! the line went limp, and I was left standing there to ponder my ineptitude once again.
Bonefish: 4, Phil: 0

The next time Sandro called out a set of coordinates, I concentrated on every tiny detail of the process, and finally it all came together—the right cast, the right hook set, and smooth handling of the line. After about a 10-minute fight, I got my hands around my first Belizian bonefish. It wasn’t exactly a trophy, but I don’t think that I ever worked harder for a single fish. The senses of joy, wonder, and relief that came together at that moment are unforgettable.

If you’ve got the urge to match your skills against the wind, the water, and the wily bonefish, Belize is definitely the place to start. In two days, I landed eight bones and lost at least that many more. None was over four pounds, but they all fought long and hard. Fortunately for me, the guides at El Pescador were skilled, patient, and helpful. And once I got the hang of it, I found that there was nothing about the process that the average trout fisherman couldn’t do.

I’ve since fished for bonefish a few times in The Bahamas, and I’ve been back to El Pescador, as well. I still make mistakes, for sure, but the lessons learned on that first trip have served me well. . . .