Trout streams are like humans: every one has a different personality. Some are overly friendly, and some would like to kick you in the head. Idaho’s Silver Creek is often the latter. The key is to understand how to deal with such difficult folks, so you get what you want out of the relationship. Recently I spent time with several of Silver Creek’s seasoned fly-fishing guides, and they helped explain how to deal with (not conquer) with this fickle spring creek.

Silver Creek fish are leader-shy, and all the guides I fished with agree with on one tactic: “Fish the fly first.” In other words, make sure that the trout sees your fly first, rather than your leader. It’s likely you wont score even a juvenile trout if you make a traditional upstream presentation, casting from a position that puts the leader over the fish. Instead, you must position yourself upstream of the fish and cast at a downstream angle, so the fish sees the fly first. This practice is not uncommon on challenging rivers such as the Henrys Fork, Delaware, and South Holston, but it’s a change for me because I rarely nymph downstream. 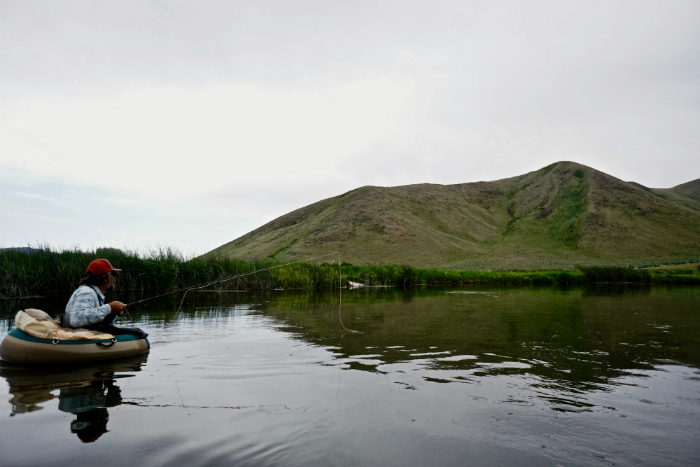 Taite lowers his rod tip at the same speed as the current to “feed” the trout.

A popular approach on Silver Creek is nymphing with a dry-dropper rig, which allows the angler to fish both a dry and a nymph. The challenging part (at least for me) is that almost all nymphing is done with a downstream presentation, which means that the nymph is downstream of the dry fly and it’s easy for slack to occur between dry and nymph. If slack between the dry fly and nymph is created during the presentation–if, for example, an overpowered cast creates a curve or slack in the line–it’s possible that slack will remain during the presentation. Such slack isn’t an issue on faster-moving waters where trout strikes are aggressive, and it’s no problem detecting such aggressive strikes even with slack between dry and nymph. It’s a different story on slow-moving streams, such as Silver Creek, where the trout lazily drift drift over to inhale food items, where such slack may cause the strike to go unregistered. Enter “pull back the tip.” 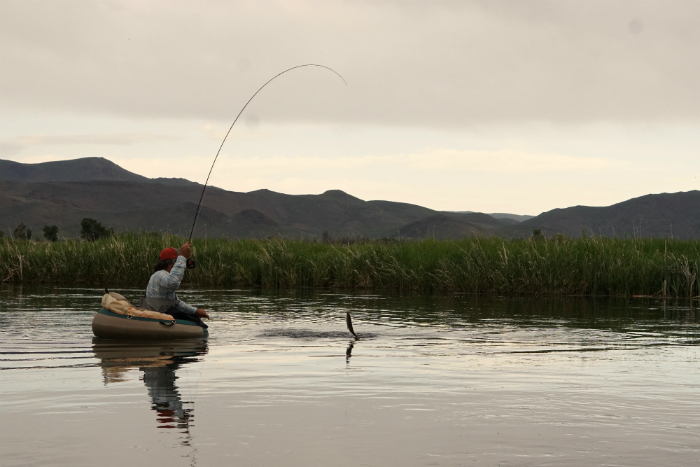 Because of this downstream presentation, Taite was able to hook a very wary Silver Creek trout .

While this approach has been used for many years on waters such as the Henrys Fork and Silver Creek, I needed this reminder from my new friends after my upstream presentations failed to produce a single fish. Hopefully, this approach will help you hook up when you need to make a downstream nymphing presentation.

2 thoughts on “Pro Tips: How to Make a Downstream Dry-Dropper Presentation to Wary Trout”