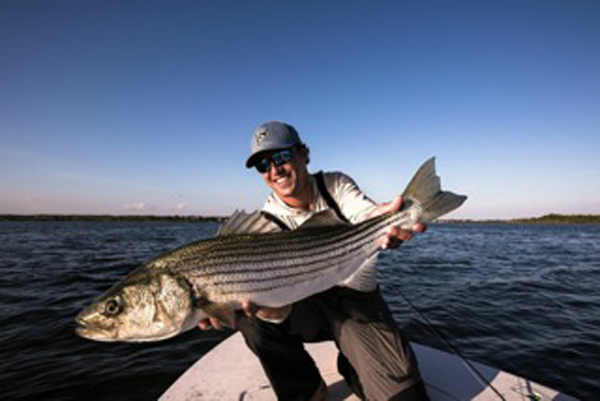 Big bass sip worms from the surface when the hatch is really on.
Photo courtesy Capt. Aron Cascone

In Rhode Island, the cinder worm emergence–some anglers call it a “hatch”–sure took its time getting started this season. The switch finally got flipped in a big way on May13th. There are now plenty of stripers and an abundance of worms to keep them happy. Our first trip of the year was excellent, with our client catching 10 fish. It was his first time fly fishing, and his first fish on the fly was around 30 inches–a really nice worm-hatch bass for any angler, especially on a 7-weight. I am expecting it to be a banner year for the hatch and am anticipating it to last until the end of June in my home water, Ninigret Pond, and even longer in some of the state’s other estuaries.

If you haven’t had the opportunity to experience a cinder worm event, I can assure you it is a remarkable one. Unlike most other places, where the worms emerge in the middle of the night, our hatch occurs late in the afternoon and can last well into the evening, with stripers visibly feeding on worms that are spawning on the surface. These bass pick the worms off the surface similar to the way trout eat dry flies. It’s a spectacular event that is hard to forget. Here are some basic facts about fishing the cinder-worm hatch:

About cinder worms
Cinder worms generally measure 1 to 4 inches long. They have a black heads and pinkish red to brownish bodies. These worms spend most of their lives burrowing in the mud until the time and temperature is right to spawn. At that time, they will migrate to the surface and mate.

Season
May start as early as mid April and last through the month of June and is directly related to the water temperature.

Moon cycle
Each emergence begins near the time of the full moon. The emergence increases to a maximum intensity during successive nights and decreases to a low point coinciding with the third quarter moon phase. The emergence rises and falls again with the new moon and subsides shortly thereafter. Worms may swarm on any night during their mating cycle, but most of the activity occurs around the new and full moons. Many believe three to four days before a new or full moon marks the peak of the emergence.

Time of day
In Ninigret and most other Rhode Island saltwater ponds, the spawn starts early in the evening and continues to shortly after dusk, with its peak occurring near dusk. Although spawning activity can happen at any time of day, in many spots in Connecticut and Massachusetts, the spawn occurs predominately at night.

Weather
Warm, sunny days are ideal to warm the bottom of the ponds and get the worms. moving. A light breeze helps break up the surface a bit, making the bass a bit less finicky. A couple of cooler days in a row can shut an emergence down.

Tide
Stripers feed best shortly into the outgoing tide, as the worms are getting sucked into currents and the bass can establish feeding lane.

Presentation
I like to vary my retrieve and presentation. Although I find that casting directly on top of large boils with a short and slow, to nearly no, retrieve works best in open water. Don’t be afraid to fish the outside edges of a dense swarm. When fishing in moving water, I like an upstream approach, similar to fishing to trout.

Aron Cascone operates Constant Angler on Rhode Island’s Ninigret Pond. He was featured last summer on this blog, as well.

One thought on “Pro Tips: Making the Most of the Cinder-Worm “Hatch” for Big Stripers”