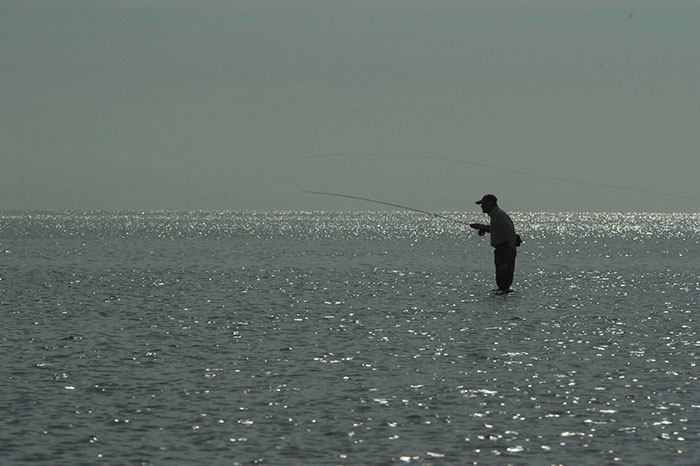 Standing still on the saltwater flats can actually draw fish to you.
Photo by Sandy hays

Remember your parents telling you to stop fidgeting? Well, take that advice with you the next time you find yourself wading.

The rule of thumb we’ve all read and heard countless times is to approach your quarry carefully and cautiously in order to avoid scaring off everything with fins. Everything you do, even the tiny movements used to tie on a fly, can be noticed by fish.

Anne’s Beach (on Florida’s Lower Matecumbe Key), is a narrow beach marked by a gradual, 150-yard stretch of semi-soft base before you arrive at a well-defined drop off. While wading somewhere between waist- and chest-deep—well over 100 yards in and with swimmers safely behind me—and after staying nearly motionless for just three or four minutes, I noticed something striking: I became “structure.” It’s a fact that fish love structure because it can provide a safe hiding spot or a place to ambush prey from. 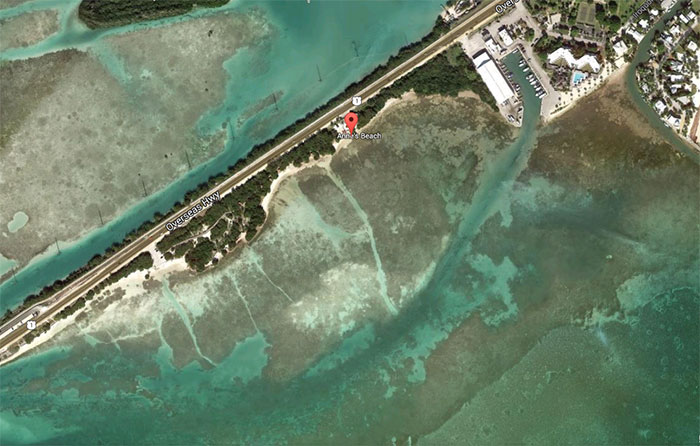 Anne’s Beach, in the Florida Keys, offers a gently sloping flat and plenty of fish.
Image via Google Maps

It’s impossible to be entirely motionless while wading: you’re doing the side-shuffle, casting, etc. But stay still long enough, and a community of fish will gradually build up right around you—and some of these fish might even be the quarry you’re tracking. The best examples are sharks, barracudas, box fish and, to a certain extent, jacks. Some species, such as snook or mackerel, are constantly on the move in shallow water— you have at best just one cast to attract them—but other species prefer to circle around, combing and recombing small patches of shallow water. These are the fish that I find hard to resist, more so when their skittish cousins (bonefish, permit), want nothing to do with my crafty, delicate presentations. While it’s unreasonable to expect this sort of behavior from all species, many do have the confidence level to approach you and stay with you even while you’re casting. At times, a barracuda’s curiosity can be almost heroic, and these fish often hang around and observe you for minutes before getting bored and darting off. 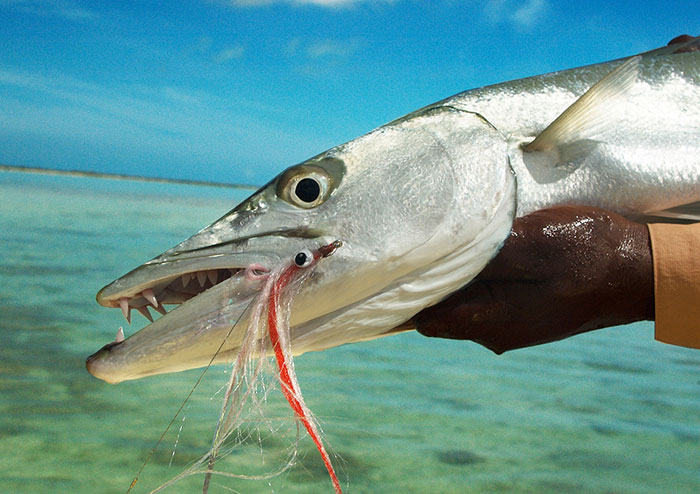 If you are not moving, species such as barracuda will come within range.
Photo by Sandy Hays

I repeated my experiment several times, and at one point there was so much fishy traffic around me that I was successfully dapping—with zero camouflage—in open water.

Here are a few pointers: wear dull, sand-colored apparel, and be sure to conceal flashy metal implements. Some species—like sand sharks, nurse sharks and lemon sharks—require sinking patterns as they’re nearly always nosing around the ocean floor. Barracuda are famous for taking surface flies, but will happily go for sub-surface offerings. Boxfish and jacks take flies at every level of the water column.

Next time you wade, stop fidgeting for a few minutes and watch a community of fish build up right around you. It’s an experience you’re unlikely to forget as you so rarely get to visually track your fly in salt water, at such an intimate distance.

Robert Morselli is the research director for the television show “How It’s Made.” A compilation of Robert’s fly fishing articles can be found at Fly Fishing Insider.

7 thoughts on “Pro Tips: Stop Fidgeting on the Saltwater Flats”