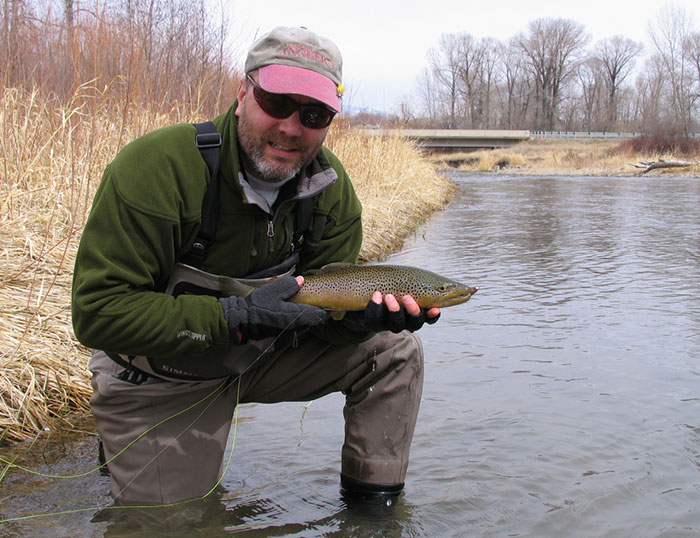 When the nights start to cool and leaves start to change colors, the thoughts of brown trout turn to procreation. To build up energy for the spawning ritual and to put on weight before the lean winter ahead, even big trout start to feed more aggressively, abandoning their notorious wariness in the process. Because spawning can be extremely competitive—as the fish battle for prime beds and mates—browns also become more territorial, attacking anything that invades their staked-out home turf. The combination of these behaviors makes fall the prime time to cast big streamers, which the trout see as both high-calorie meals and alien invaders. And, as many streamer fanatics have discovered, throwing two streamers together not only catches more fish, but the tandem rig will often draw strikes when a single fly won’t.

Twice as Nice
When I guided in Montana in the mid 1990s, we often fished a lake that held some huge Kamloops rainbows and an astonishing population of damselflies. It was there that I learned to fish a tandem rig that featured an olive Woolly Bugger up front and a jointed damselfly nymph trailing behind it. The system worked great, and the prevailing theory was that the Bugger caught the trout’s attention and then the nymph presented itself as a tasty morsel. The rainbows would often hit the streamer, but it never occurred to me to fish two streamers because I couldn’t see the logic in it.

It wasn’t until years later, when my friend Steve Hemkens and I floated the Colorado River below Glenwood Canyon with guides Bob Streb and Paul Zimmerman, that I saw the wisdom of casting two big hunks of meat at the bank. According to Streb, a New York native who has guided in Colorado for years, he first learned the system from Bill Perry, one of the better-known guides in the Vail Valley.

“I don’t know who originally came up with the idea, but it was Perry who really figured out the basics of the technique we use now, which has evolved quite a bit.”

Streb’s system is designed for anglers working from a drift boat or a raft, and he believes that the moving boat makes all the difference. It’s important to work downriver fairly quickly, both to cover as much water as possible and because the commotion of fishing such a big rig and battling big trout is effectively “spooking the pool,” or putting all the nearby trout on high alert. The boat also allows you present the flies at different depths, especially over deep ledges well off the bank.

“Everyone focuses on the first few feet off the bank,” Streb says, “but the fish will sometimes hold much farther out into the current.”

That’s why it’s important that you strip your flies all the way back to the boat and then pause before picking up your line to cast again. This pause gives the streamers a “dying” motion that can trigger a strike from a fish that’s been following the retrieve but hasn’t yet made the decision to attack. It’s the fly-fishing equivalent of the figure-8 that pike and muskie anglers use to draw boat-side strikes.

Gearing Up
Over the years, Western anglers have developed several systems for fishing tandem streamers. While Streb prefers to use a floating line and heavy flies, others—such as streamer guru Kelly Galloup—advocate for a sinking-tip line and lighter patterns. Other options include loop-to-loop weighted tips and even shooting heads. Streb believes that heavy flies are more versatile for fishing different depths and offer a more dramatic dying motion when you pause your retrieve.

A 7-weight rod will give you enough oomph to cast two heavy flies in windy conditions, as well as the strength to pull a big trout away from any obstacles, such as downed trees or rock gardens. To the end of your floating line, attach a stubby 5-foot monofilament leader. The fish are generally not leader shy in fall, especially when there are two giant streamers swimming by their faces, so you can get by with 0X or 1X material. Streb saves the butt sections of the 5X tapered leaders he uses during the summer to serve as heavy streamer leaders in the fall.

For the dropper, use 1X monofilament because, since the fish don’t care about the leader, you might as well use something strong enough that you can simply pull the streamside bushes down if you get snagged. And since you want to cast as close to the bank as possible, you will get snagged. The motion of the front fly will be somewhat restricted by the pull of the dropper fly, so it’s not really worth the extra effort to tie a loop knot up front. A simple clinch or any other direct-connection knot will do. The dropper fly, however, will dance and swim and “die” better if you attach it with a loop knot, such as the nonslip mono loop. 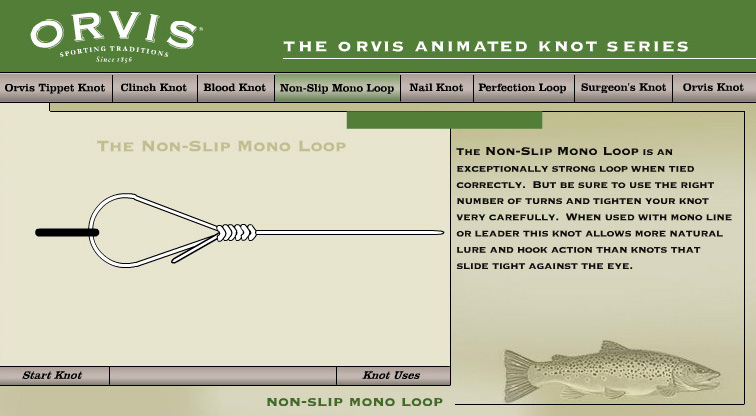 The nonslip mono loop will give the rear fly more freedom to move in a lifelike way.
Photo via  Orvis Animated Knots

The length of the dropper is one of the keys to Streb’s system. He believes that most anglers strip streamers too short and too fast. He constructs his rig so that there is a full 3 feet between the flies, which is exactly the length of his preferred stripping motion. After the cast, your first strip should be long and hard, followed by a long pause.

“That way,” Streb argues, “the fish sees the first fly go by, and then the second fly looks him right in the eye and dies.”

What makes this dart-and-die motion so effective is that it appeals to both the fish’s need to eat and its desire to attack anything that comes into its territory. In clear or shallow water, you can often watch the whole process unfold, which will help you fine-tune your stripping pattern to match the trout’s behavior. If you decide that a shorter strip is more effective, set the length of your dropper to match the new strip distance.

Wading Tactics
Although Streb believes that the moving boat is the key to his system, I have used tandem-streamer rigs with very good results while wading on the three larger rivers—the Battenkill, the Hoosick, and the Deerfield—that hold big browns near my home in southwestern Vermont. Because a wading angler doesn’t have the height advantage he would when fishing from a boat, you have to construct a system that’s easier to pick up before the cast. Use a 9- to 10-foot, 6- or 7-weight rod and a floating line with a loop-to-loop sinking tip at the end. The sinking tip allows you to get by with just a 3-foot leader, which comes out of the water easier than the longer section of mono Streb uses. Instead of 3 feet between the flies, scale it down to just 2 feet. I use 1X for the leader and 2X for the dropper.

There are two main differences that separate the floating and wading techniques: where you fish and how you present the flies. Wading anglers don’t have the luxury of covering long stretches of river, so you should focus on the structures—such as downed trees, rock ledges, and the like—that hold big browns and then fish them more slowly. Since this is a true big-fish game, you might want to hole-hop more than you normally would, focusing on big structure and skipping those riffles and pools that you might fish at other times of the season to catch smaller browns.

To get your flies down to the fish—and to approximate the “dying” motion that Streb describes—cast your streamers quartering upstream. Mend appropriately to help the flies sink, and pick up any slack as the flies drift downstream. When the streamers are directly across the current from you, make a first, hard strip and then pause. Continue this strip-and-pause pattern as the line swings across the current below you. Experiment with different speeds and strip lengths. Try to drift the flies as close to the structure as you dare, and try several different presentations to the same spot before you move on. I’ve found that the majority of strikes come either right after the first strip or just after the flies begin to swing, so be ready.

At the end of the drift, allow the line to come tight in the current, as this will help bring the heavy flies and the sinking tip toward the surface. I find that a snap-T cast is the best way to get the line out of the water and change direction without causing tangles or endangering your person. Once the snap-T positions the line upstream of you, make a roll-cast pick up and cast normally. Or, if you aren’t casting very far, you can simply use roll-cast to shoot some line. 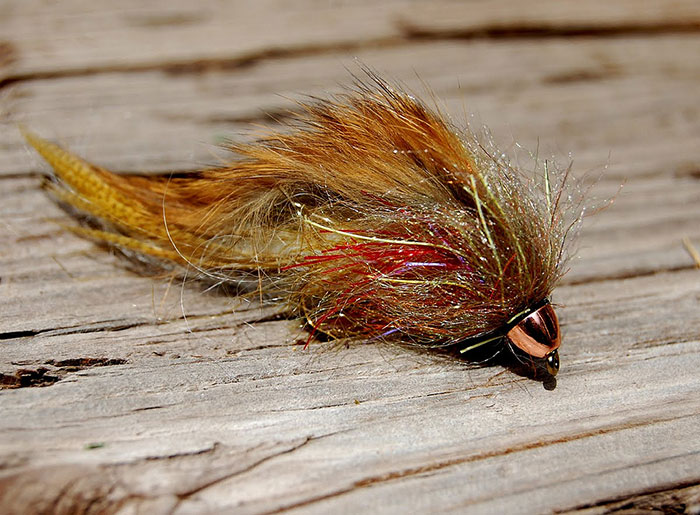 Bob Streb’s Sam’s Sock pattern is an example of the big, ugly streamers that can get fall brown trout excited.
Pair it with a second streamer when you go “Bubba” hunting.
Photo courtesy Bob Streb

Meat Counter
Because you’re after huge fish and you want to throw something that the trout finds threatening, the patterns you use should be big, ugly, and wiggly. Elegance is unimportant, so there are no Gray Ghosts or Mickey Finns in Streb’s box, which is instead stuffed with such monstrosities as the Tequeely, Autumn Splendor, Lemon Drop, Slump Buster, and Goldielocks (in sizes 2 through 8). His favorite patterns—the ones he says “die” the best in the water—incorporate bunny strips and plenty of weight in the form of tungsten cone heads and lead wire wrapped on the hook. When you’re pairing flies, use contrasting patterns: one big, one small; one bright, one dull; one heavy one light; or any other combo that appeals to you. Streb always puts the lighter-colored fly last so he can see where the end of his line is.

Streb’s own Sam’s Sock pattern was once deemed “too ugly” by a fly manufacturer, but he has used it to catch countless browns over 20 inches on his Colorado waters. One of his clients has used the fly to take big bull trout in Montana, as well. The mallard-flank feather underwing helps to hold the rabbit strip up and away from the hook and the dropper line, which helps prevent the tail from wrapping or fouling itself and allows you to fish it as either a point or lead fly. The collar is made with Enrico Puglisi Streamer Brush and micro legs to create a large head profile like a sculpin.

For wade fishing, you’ll want flies that aren’t quite so cumbersome to cast, and I use something reasonably obnoxious as a lead fly, with a less flashy and smaller dropper pattern that looks more like actual food. My favorite combination is a size 2 or 4 Beldar Rubber Leg (black or brown) with a size 4 DDH Leech (olive or black) trailing behind. However, for more traditional tastes, I’ve also found that the tandem rig also works with more common flies, such as Conehead Woolly Buggers and Muddler Minnows.

There’s no doubt that a full day of throwing tandem streamers is hard work, more so than most other kinds of fly fishing. Because the flies are so big, you will generally tempt only bigger fish, which means you may catch fewer of them, and you’ll get several follows and slashes for every hook up. But even the follows will get your heart pumping, and when you do feel the kind of trout that Streb calls a “Bubba” hammer the streamer so hard that it nearly pulls you out of the boat, you won’t be thinking about your sore shoulder or the last fishless hour.