[Editor’s note: A friend messaged me this morning, saying, “I went to your spot in Yellowstone National Park on Tuesday, and there was a straight up 24-inch cuttie slamming stoneflies in the film. Unfortunately, another group beat me down there, and I watched an angler blow a perfect take.” Of course, I was reminded of this article about both getting a good drift in those situations and—just importantly—setting the hook. Both can be a challenge.]

One of my favorite fishing holes in Yellowstone National Park is where the Yellowstone River flows over a ledge of volcanic rock into a very deep pool. When blue-winged olives are hatching, huge cutthroats come to the surface to feed at the center of the pool, but because the pool is so large and so deep at the edges, there’s no way to cast to these fish from the bank or from downstream. The only way to present a dry fly is to stand at the edge of the ledge, make a 40-foot cast directly downstream, and then allow the fly to dead drift.

Most fly fishermen can cast 40 feet, so that’s not a problem. Achieving a good dead-drift at the end of a downstream cast is another story. Anglers have been taught that the line should straighten completely at the end of a cast, but when you’re casting downstream, this “proper” casting technique causes the fly to begin dragging immediately, making a dead drift impossible. My most skilled clients, those who were able to hook the fish in this pool, figured out that the key to this presentation was slack.

To make a good downstream dry-fly presentation, you must throw some slack into your cast and allow the fly to take up this slack as it drifts away from you. Most of the time, this does not allow for a very long drift. For instance, if you can deliver the fly 40 feet, but use 50 feet of line to do so, then you should get a 10-foot dead drift before the fly drags. Once you’ve located a rising fish, drop your slack cast just upstream of the trout’s location, and allow the fly to drift through the feeding lane.

The Pile Cast
A great way to introduce slack into your presentation is to make a pile cast, which places all of the slack at the leader end of the fly line. Done correctly, the pile cast is a thing of beauty, as the leader and the first few feet of fly line fall gently to the water in a controlled jumble. The big advantage of the pile cast is that, with all of the slack at the business end of the fly line, the fly itself is free to drift unencumbered and is less likely to be affected by complex currents pushing on the belly of the fly line.

The key to making a pile cast is directing the fly line upward, rather than outward, on the presentation cast. Begin with a low backcast, and then stop the rod high on the forward cast, throwing the line toward the sky at about a 45-degree angle from horizontal. As the line straightens out, drop your rod tip to the water’s surface, and watch the line and leader flutter to the water. Only through practice can you learn the right amount of power required to put the slack where you want it. An accomplished caster ends up with a straight length of fly line from his rod tip to a small pile of slack, out of which extend the tippet and fly.

No matter which of these methods you use to make a downstream presentation, be sure that your fly lands several feet upstream of where you think a fish might be. (If you’ve seen the fish rising, you’ll know exactly where it is.) This way, the fly can drift away from the rest of the line, and by the time the fish sees it, the fly is floating all by itself. When the fish strikes, raise the rod tip and quickly strip in line to pick up all the slack. 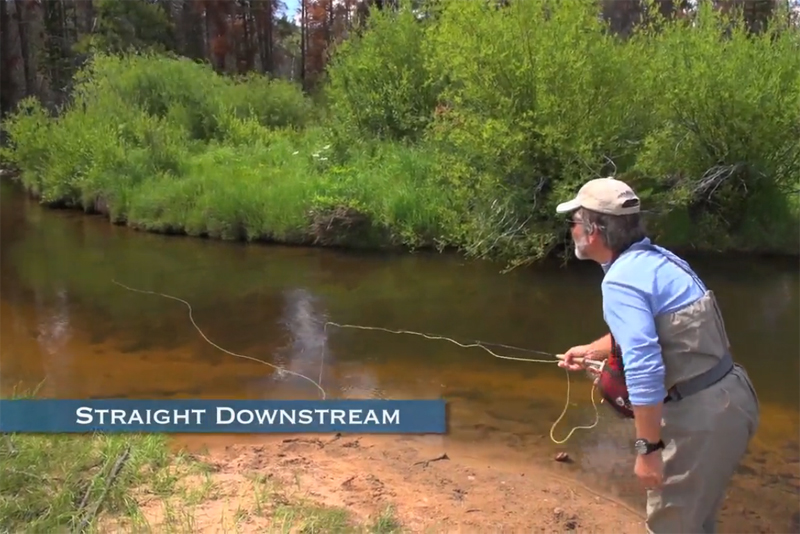 Check out the short video on downstream presentations at the Orvis Fly Fishing Learning Center.

Tight Eddies
I discovered another great use for the pile cast a few years ago on the Colorado River near Kremmling, Colorado. A few of us were taking a lunch break at a riverside picnic table, when we noticed a large cutthroat in an eddy, sipping small mayflies from the thick layer of foam on the surface. It was a tight spot: on one side of the eddy was the river’s main current, and on the other was the mouth of a small creek. The only way to approach the eddy would be from the slack water directly downstream.

As the fish continued to rise every 30 seconds or so, we munched our sandwiches and debated how best to present a fly. The water in the eddy was rotating pretty quickly, so it would be tough to keep a fly in one place for very long. Finally, Bill couldn’t take it any longer, so he put down his food, picked up his rod, and waded in below the eddy. Of course, the rest of us began heckling and shouting contradictory advice.

Bill’s first couple of casts confirmed what we had surmised: No matter the angle of attack, the proximity of the main current, slack water, and the swirling eddy meant that Bill’s fly began dragging almost as soon at it hit the water. The cutthroat continued to rise to bugs in the foam, but it wouldn’t touch Bill’s skating fly. If he were going to tempt this trout, he’d need a special cast.

Because the foam on the surface of the eddy was quite thick, Bill wasn’t much concerned about spooking the fish, so he waded a little closer and threw his line nearly straight up in the air. We spectators watched with interest as the end of the line and the leader piled in the center of the eddy. The swirling currents immediately went to work on the line, but because there was so much slack, the fly itself remained perfectly still for about 10 seconds…long enough for the fish to find it and eat it.

Bill threw his rod tip to the sky, and began stripping furiously and walking backward to pick up the slack. We all rushed down to the river’s edge, nets in hand, to help land the fish, a gorgeous 17-incher. As he cradled the trout, Bill gave us all a look of triumph. No matter who caught the most or the biggest fish that day, he will always be remembered as the guy who came through with a killer presentation in the clutch.

Setting the Hook
Once you’ve got the cast and the drift figured out, though, you’ve still got the hook-setting problem. It’s clear why hooking fish from this angle is difficult: the angler is pulling directly away from the fish’s mouth. In some cases, when the angler can see the fish rising to the fly, the temptation to set the hook before the fish even closes its mouth is too great, and the fly disappears before the fish even has a chance to grab it. So you need to learn to wait an extra beat before setting the hook. After the fish takes the fly, it will turn to head back to the stream bottom. If you set while the fish is turning, you’re more likely to bury the hook in the side or corner of the trout’s mouth.

The bigger problem is the slack in the line. You need that slack to achieve the drift, but that same slack makes it more difficult to get tight to the fish. The classic rod-tip-to-the-sky setting motion may do nothing more than pick up the slack nearest you. Instead, set the hook by sweeping the rod backward, low and parallel to the water and making a quick strip. This technique removes the slack from the line and uses the tension of the line still on the water to drive the hook home. Sweep the rod to your downstream side, to avoid dragging the line across your body, where it could get caught on one of the gewgaws on your vest. Once the fish is hooked, then you can raise the tip and start stripping like a madman to remain connected to the trout.

3 thoughts on “Pro Tips: The Keys to a Good Downstream Dead Drift”