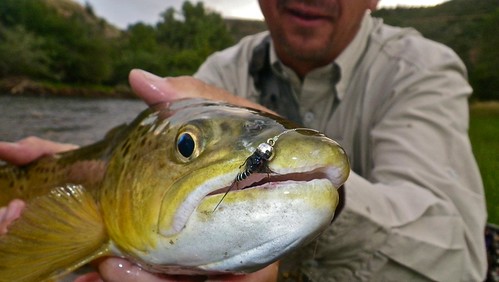 Sometimes, trout in rivers don’t seem to be eating one particular insect, so what’s a fly fisherman to do? I carry a collection of patterns that catch fish during those times when you simply can’t tell what the fish want to eat. Here are my favorites:

1. Higa’s S.O.S. Size 16-20.
Colors: I prefer the original black.
This is my top confidence fly for the past four years or so. I got to fish it as a prototype and have caught fish on it during all seasons of the year all over the West. The SOS’s medium to small sizes imitate both mayfly nymphs, such as pale morning duns and blue-winged olives, as well as midges. A little flash, a little color, segmented body. . . It just has a little of everything that makes it tempting to a trout. I love to fish this fly as a dropper under a dry as well as in a nymph rig.

In a move that might amount to heresy, I even tie this fly on a size 8 hook with a huge tungsten bead and lots of wire to use as a point fly for Czech nymphing. I substitute out the Krystal Flash legs with black pheasant-tail tips for flies that big. No matter where I go, this fly is always with me in a variety of sizes. I very rarely fish a day without using it, hatch or no hatch.

2. Hare’s Ear. Sizes 10-14
Colors: Natural, black and olive.
This fly has been around for a long time for a reason. There are a lot of variations, but I still prefer the natural hare’s ear dubbing with gold ribbing. When tying my own, I usually opt for a Thinskin wing case in either mottled turkey or black.

3. Prince Nymph or “The Fly Formerly Known as Prince” aka “AKA.” Sizes 10-14.
The Prince works well a lot of the time. It seems like often fish take it when there are or have been caddisflies present, but I believe they take it with no particular prey in mind, as well. It just looks buggy. It’s got good flash, the delicious iridescent ostrich herl, a soft hackle, and white wings that seem to trigger strikes. I prefer the “Formerly Known as” when the water color is a little off. On sunny days, I often go with the original.

4. Copper John. Sizes 12-18.
Colors: Red, copper, green.
This fly has become an instant classic because it works. It works for a lot of reasons: it sinks quickly, matches the profile of a lot of bugs, has some color, some movement, nice segmentation and more. I fish it in several other colors, but these three are my favorites.

5. Bead Head Soft-Hackle Pheasant Tail. Sizes 12-18
A lot of people like to fish soft hackles during hatches or on sunny days, but I really like fishing them most any time. When the fishing is tough or the fish seem only moderately interested in any particular hatch, the soft hackle will often draw fish out. I like the Pheasant Tail and its cousin the soft-hackle Hare’s Ear. (It seems wrong not to include the regular Pheasant Tail Nymph here, I know, but the SOS serves the same function, in most cases.) 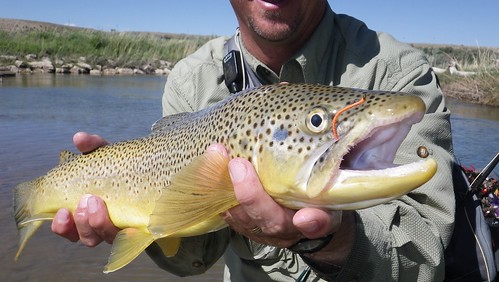 The Wire Worm attracts strikes from even big fish.
photo by Bryan Eldredge

6. Wire worm. Size 4-12.
Colors: Florescent orange with copper ribbing. Preferably with an orange bead in the middle.
This is a simple takeoff of a fly that has become very popular of late, the Steel Worm or Wire Worm. I prefer neon orange with a matching orange bead in the middle wrapped with copper wire. The fly gets down, gets their attention, and gets them moving. It’s a great fly to keep in reserve for a fish you spot deep or where you think there ought to be one and he just won’t budge.

7. Black Rubber Legs. Sizes 6-10.
Stoneflies are common in a lot of rivers, but I fish this on the “Steak Principle.” That is, I may have just stuffed myself with pizza but slide a bacon-wrapped filet in front of me and I’ll eat the thing. Rubber legs seem to work on that same principle.

8. Vladi Worm. Sizes 4-8.
Colors: Original pink, red and orange.
Let’s face it: the Europeans, especially the Czechs, have taught us a lot about how to catch picky fish. One of the great lessons the Czech nymphing revolution has taught us is to keep in contact with your nymphs. Doing that requires that you get your flies down fast. All the way down. I load this fly like a cannon ball, sometimes using as much as three layers of different sized wire for really fast water. It looks a lot like that natural worms that fish see all the time and there is something to be said for any fly that is tied with a condom. Talk about your conversation starters!!

9. Sow Bug. Sizes 12-18.
Okay, I admit it. The Provo River is the closest to me, and the lowly sow bug is available every day of the year there. But these bugs work great all over. They look a lot like scuds and even caddis larvae if you use your imagination, at least as much as a lot of Czech nymphs. Again, depending on the size or weight, sow bugs can be a point or a dropper fly.

Cranefly larvae are much more plentiful than most of us realize, so fish see them in many waters. Besides, they are just so juicy looking! 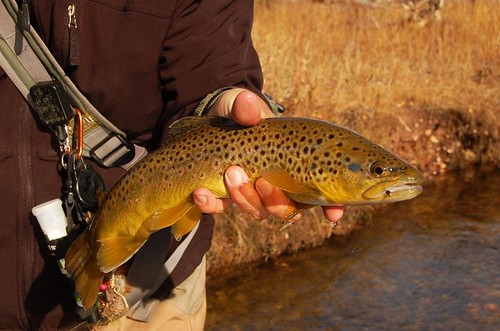 The Copper John sometimes works when nothing else will.
photo by Bryan Eldredge

17 thoughts on “Pro Tips: Top 10 Nymphs for When Trout Aren’t Keying on Anything Specific”