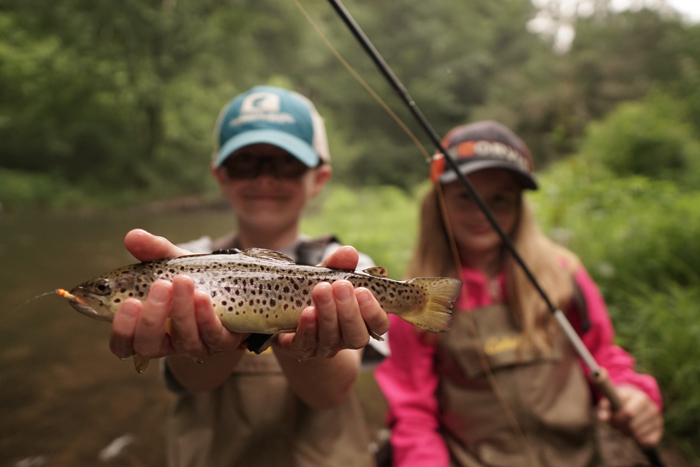 The heavy rainfall on my home waters last summer left me two options: head north to fish the mountain streams, or deal with the high water. I’m happy to do either one. Normally, I would have been fishing for smallmouths at that time of year, but the flooding conditions forced me to refocus on trout. However, I discovered that one of my favorite bass tactics—using brightly colored flies—works for trout, as well.

I always thought detecting strikes would be easy while bass fishing because the fish would pummel the fly during the retrieve, hitting the fly so hard that it would be impossible for the angler not to feel the strike. I couldn’t have been more wrong. Years ago, I was fishing in slow water with a local smallmouth expert, Andy Wagner, and the smallmouths were taking our streamers so softly that is was difficult to detect a strike. Andy told me to tie on a white streamer, so we could see the fly in the water. When we saw the white fly disappear, we’d know that a fish had eaten the fly. Ever since, I’ve been surprise how often I don’t feel a smallmouth eat my fly, but know to strike when I see the fly disappear. This is a great tip for the smallmouth angler, but it’s also a good one for trout anglers fishing high and off-color water. 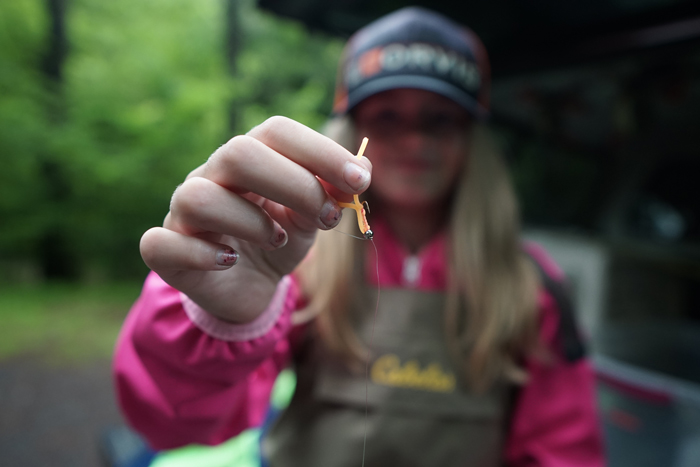 The kids tied up their own worm patterns the night before.
Photo by George Daniel

It’s no secret that the soft water along the edges or behind any obstruction that slows the flow are the best spots to target trout during high water. Oftentimes, the soft pockets of along the edge are shallow. Your first impulse might be to use heavily weighted flies to get down and fast, but the opposite is actually true. If the nymph is too heavy, it hits stream bottom too fast and doesn’t give the trout time to find it in the water column. It’s also important to use a pattern that is highly visible. Since trout cannot see as far as they can in clear water, you basically need to drop the fly in front of its nose. And when you present a fly in such a manner, the takes are usually soft, as the trout simply inhales the pattern.

This is where a brightly colored fly comes in handy. Our bass rivers had been blown out for the last three weeks, so my kids and I had been casting for trout in high water. But my 7- and 9-year-old kids had difficulty detecting strikes, resulting in two frustrating days on the water. So we went to the local fly shop and bought some of the brightest Squirmy Wormy material we could get our hands on. The kids tie all their own worm patterns, so they went to work at the vise that night, and then went back out to the same waters we had had difficulty on the day before. Both kids attached a fluorescent red or orange Squirmy to their tight-line rig and were told to set the hook whenever they no longer saw the fly. Within a few minutes, they were both into a fish–not because the trout weren’t eating the patterns from the previous two days, but because they could see the fly disappear in the trout’s mouth. 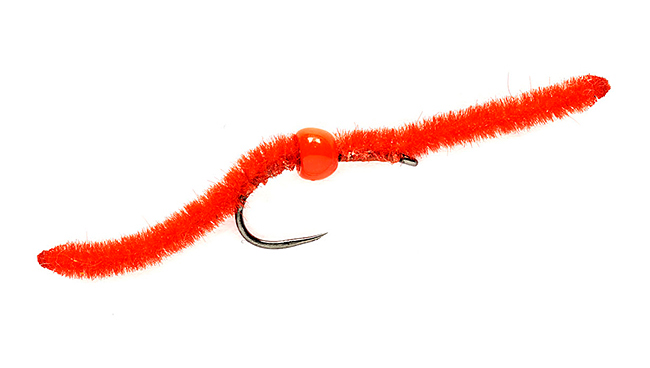 The Tactical Tungsten Belly Worm is quite visible even in darker, muddy water..
Photo via orvis.com

I would consider myself decent at seeing strikes when tight-lining, but I was amazed how many times I saw the fly disappear with little hesitation on the line. This proves how often trout strikes go undetected. So the next time you’re fishing shallow and soft water along the banks during a high-water event, don’t forget to try a bright colored pattern. When the pattern disappears, set the hook. It may save the day.