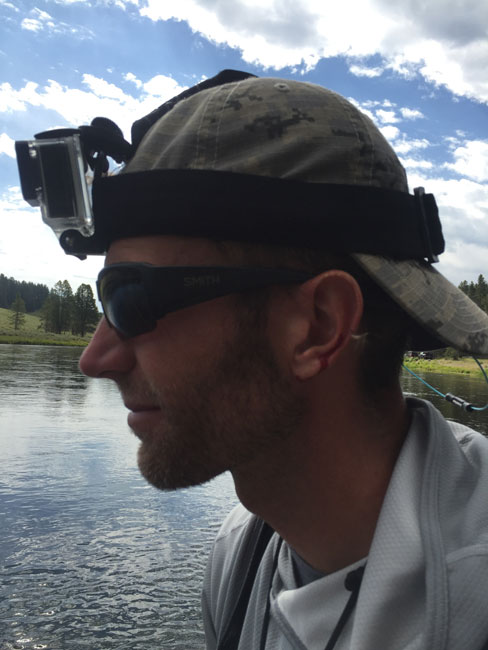 A dry fly stuck in Goerge’s ear on the Yellowstone River, the result of a crap cast. The footage
showed his shoulder dropping and twisting during the cast, which caused a collision course.
Photo by George Daniel

As the saying goes, “a picture doesn’t lie.” In this case, “a video doesn’t lie.” Originally, I purchased my GoPro to capture the highlights of my fishing adventures, including epic streamer eats and acrobatic fish jumps. While it was fun capturing such moments, I came to realize that the GoPro could become more than just a highlight reel. Instead, I could use it a personal fly fishing coach.

While my original ambition for the GoPro was vain, I began using the camera the same way a sports coach would utilize film for his or her athletes. I recall the positive impact of watching hours upon hours of my high school basketball films my mother would shootfor me. I would try to identify my weaknesses as a player (there was never a shortage) and then work on those during my next practice. I eventually made progress and slowly became a better ball player. The same concept can be applied to fly fishing with a GoPro.

I understand that fly fishing is viewed as a leisure activity and many don’t want to associate it with competitive sports. I also understand that all of you would like to become better anglers. Maybe you want to add 10 feet to your cast or learn how to become a better nymph fisher. Everyone wants to improve their skills, but it’s difficult if you can’t afford a fly fishing guide or if you like to fish by yourself. The advantage of being an instructor is that you can see your student’s mistakes. You can see the direct cause and effect for both success and failure. However, it’s difficult to see those same mistakes when you fish by yourself–unless you’re able to capture them via video. 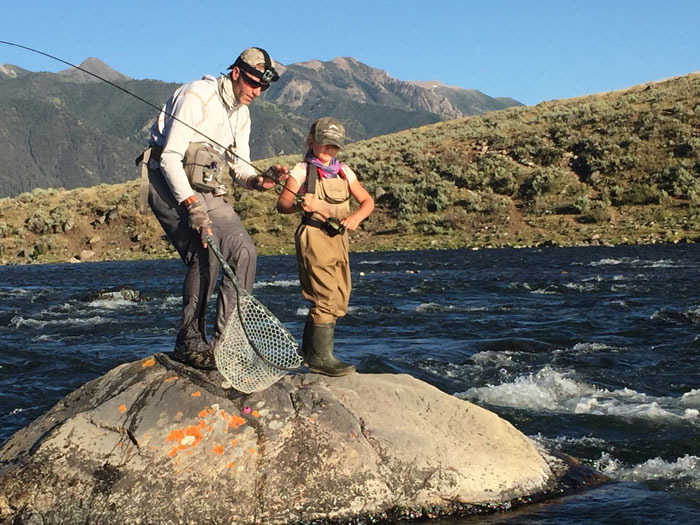 George’s GoPro captues a great family moment of his daughter landing a trout on the Madison River in Montana.
Photo by George Daniel

I’ve learned a little from watching my successes on the water, but I’ve learned so much more from my failures, including losing fish, overshooting my cast into an overhanging tree, and making inaccurate casts. During a day’s fishing, I may recall a moment where I lost a fish while playing it, if the GoPro was on, I’ll look for that scene when going through the bulk footage. It may turn out that I did things correctly while playing the a fish, but it just came off without any reason. However, most of the time, I’ll locate a scene showing myself doing something incorrectly, like whipping the rod tip back and forth (causing immediate slack) or applying too much pressure. Either way, I tend to remember more of my failures and will look for those scenes that show mistakes in attempt to correct those imperfections so they occur less frequently. You’ll likely locate the culprit if you look close enough.

Over the past four years I’ve noticed many of my own mistakes and have worked on correcting them. I feel I’ve become a better angler as a result and believe a tool like a GoPro or similar camera can do the same for you.

One thought on “Pro Tips: Use Your GoPro as a Fly-Fishing Coach”