Driving around the coast of Slidell, Louisiana, you see lots of evidence of hurricanes, whether you’re talking about the mighty Katrina or the more recent Isaac. Right in front of the slip where Capt. Gary Taylor keeps the Mr. Champ—a 31-foot Lafitte Skiff customized to cradle an 18-foot Hell’s Bay flats boat—there are a couple of sailboats resting alongside the highway. But as we set out to motor through the Rigolets and across Lake Borgne, there was just enough breeze to make things bumpy.

Our destination was the Louisiana Marsh, 650 square miles of pristine bayous, back bays, and tidal flats. Our targets were redfish, although the first week in October was a little early for the famous “bull” reds that cause anglers to flock to the region all winter. I had never even seen a live redfish, so bulls were the farthest thing from my mind. I just wanted to hook and land any size spottail we could find.

The beauty of fishing the early season was that we would virtually have the place to ourselves. In two days of fishing, we saw exactly four other fishing boats out on the marsh, and two of them were anchored up right where we dropped the big boat to continue on in the Hell’s Bay.

On day one, Gary and I were accompanied by my old friend and fine photographer Irene Kato, whom I’ve known since the mid-90s and who now lives in Baton Rouge. When I had called her and asked if she’d like to come along and take pictures, she had jumped at the chance to explore the offshore world for from her inland home. 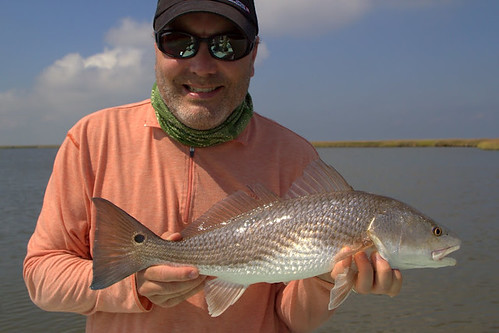 The author’s first redfish was a cause for celebration.
Photo by Irene Kato

We hadn’t been in the marsh for 10 minutes when Gary said, “There’s a redfish, right on the bank.” When I had asked about the best presentation, Gary had told me to effectively hit the fish on the head. As a trout fisherman, I found this a little nutty, and my first cast was a good two feet in front of the fish.

I tried again, this time a foot from the redfish’s nose. Still too far. The fish didn’t even react. My next cast went right over its back, and the fish spooked hard.

But before I could get down on myself, Gary pointed to another fish heading right for us. This one was what he called a “crawler,” moving right along the bank with its dorsal fin out of the water. This time, my cast was right on, about two inches in front of the fish’s nose, and it pounced. I set the hook hard, and the fight was on. A couple minutes later, I held my first ever redfish—just a four-pounder, but simply gorgeous to me.

We were faced with muddy water—caused by wind, tide, and an abundance of baitfish — almost everywhere we went, which meant that the fish were often very close before we saw them. I learned the time-tested Louisiana tactic called “doodle-sockin’,” which requires the angler to make a 3-foot cast with a 9-foot rod, which takes some doing, and I landed a couple fish that way.

Over the two days, I landed about 10 fish and saw or cast to five times that many. During the lulls between fish, I marveled at the incredible fecundity of the marsh, which teems with crabs, baitfish, and bird life, in addition to redfish, large gar, mullet, and a few monster jacks. It’s an amazing place, and I can’t wait to go back.