Bill Cairns was a pioneer in fly-fishing instruction and a Master Caster.

If you’ve been an Orvis customer for a while, you’re surely familiar with the photo above, of an angler laying out a gorgeous loop over the Battenkill. It has become an iconic image—used in catalogs, retail stores, and on the Web—because it captures the grace, power, and beauty of fly fishing so brilliantly.

The artist holding the rod in the photo is longtime Orvis casting instructor Bill Cairns, who passed away last month at the age of 81 at his home in nearby Arlington, Vermont. In casting circles, Bill was a legend, and along with Dick Finlay, he launched the world’s first fly-fishing school at Orvis Manchester in 1966. No one knew if the venture would work, so expectations were modest. If they could get 20 students, they’d be all right. Instead, 150 people signed up for the weekend-long course, making it an overnight success. (Read more about the history of Orvis schools here.) He continued to work at Orvis for many years, running the school and managing the Travel department. 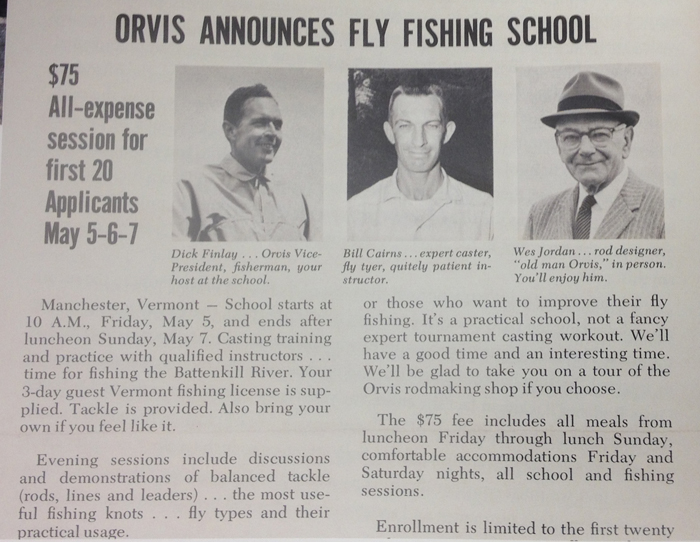 The original 1966 ad in the Orvis News for the Fly Fishing School.

But he was more than a caster: Bill was a brilliant angler, built fly rods, owned his own shop, wrote articles in all the major sporting publications, and authored two books—Fly Casting with Bill Cairns and Backpacking for Trout. He was truly a fly-fishing renaissance man.

I met Bill a few times over the years and always found him to be great company. But I knew that those who worked closely with him would have a better perspective on his legacy. Truel Myers, who currently directs the Orvis Manchester Fly Fishing School, says that Bill was an inspiration to him and to all young instructors at the beginning of their careers. He was also a master storyteller, whose favorite subject was the history of fly fishing in the northeast. 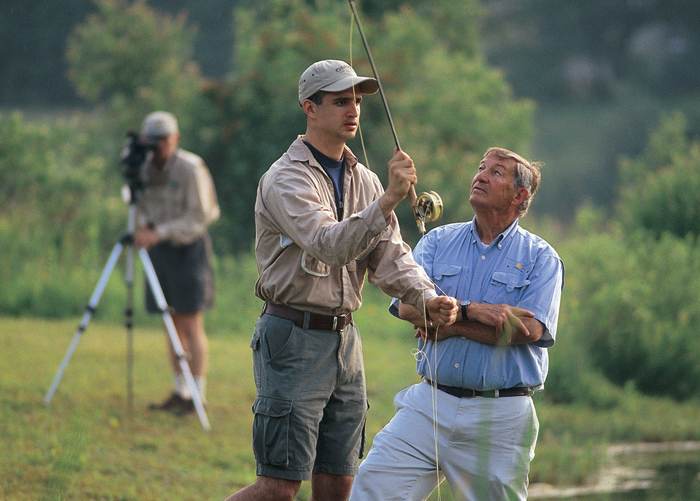 Bill offers a student some advice, while Truel Myers films the interaction.

And Pete Kutzer, known to all Fly Fishing blog readers as the host of a series of brilliant casting videos, sent me this tribute:

I was fortunate enough to work with Bill during my first few years as an instructor, and he was a huge influence on my casting. I would constantly try to cast as far as I could. He would just look on and not say a word, then Bill would make a cast twice as far, with a fraction of the effort. I would try to get tips or tricks from him all the time. He would show me a cast, and I would spend hours, days, even weeks trying to figure out how he could make it look so easy. When I would finally give up and ask Bill, “What am I doing wrong”? He would just say, “Don’t use so much wrist.”
I will never forget the first school I worked with him. During the river trip portion of the class, I was running up and down the river trying to talk to every student. I had no idea who Bill was at the time. Exhausted, I asked him why he wasn’t running around like I was. He just smiled and said “Seniority.” Later on, I realized he was giving me a lesson in quality over quantity, and I will never forget it.

One great thing about Bill was that he was always honest and straightforward, albeit sometimes brutally so. I once asked him what he thought of a lesson I’d just given, and he replied simply, “It sucked.” No sugar-coating. Just the truth. And, of course, looking back on it, he was right.

I could listen to his stories of fishing around the world, getting a fly rod from Ted Williams, or stalking what he called ‘big-ass brown trout’ and never get tired. Bill was one of the best instructors, casters, and mentors I’ve ever had the privilege of working with. The Fly fishing world has lost one of the greatest contributors to the sport. Thanks for everything Bill. 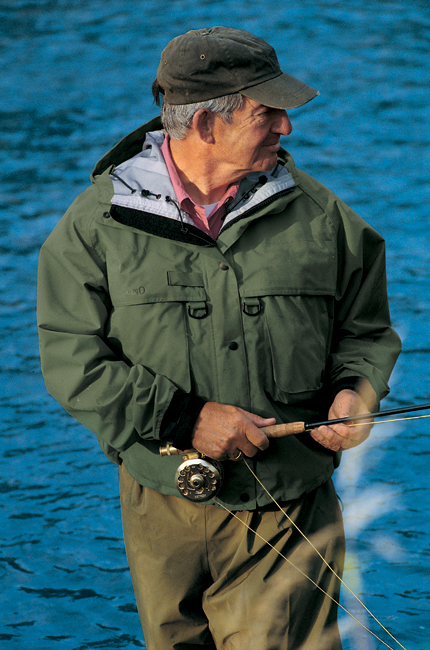 Bill was most at home on the water, chasing “big-ass brown trout.”