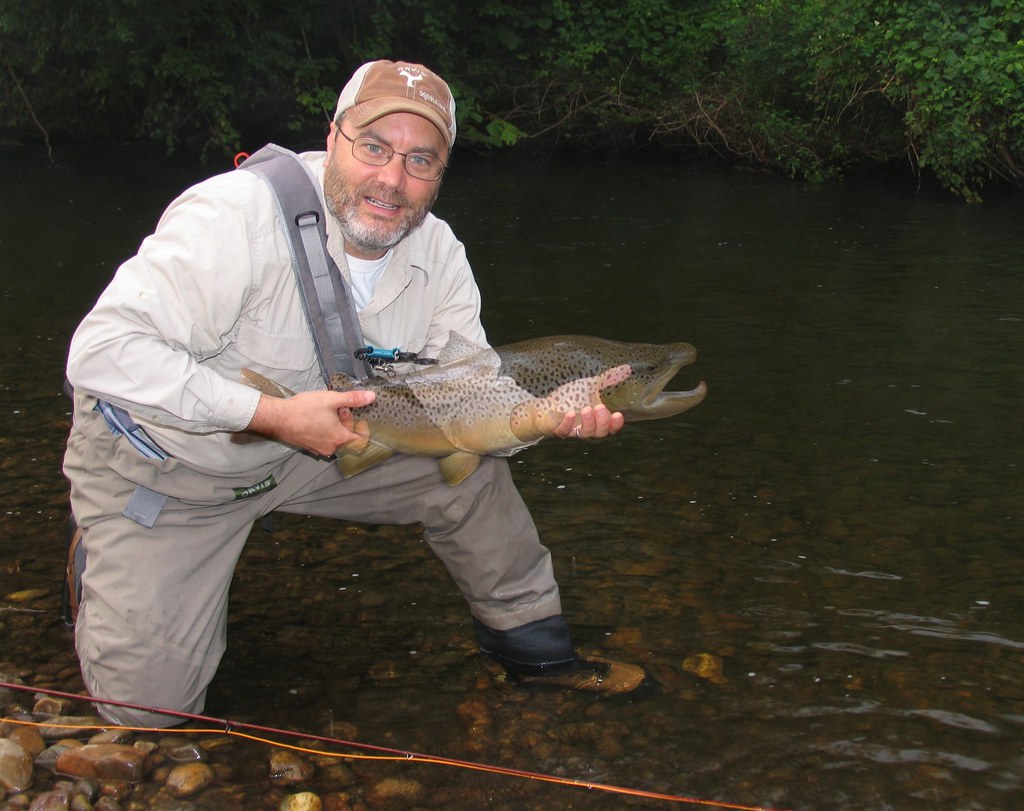 This is the picture I should have ended up with, but alas I didn’t “take my chance” when it presented itself.
Photo Illustration by James Daley

[Editor’s note: I found this photo poking around in my Facebook account, which reminded me of the blog post it comes from. This story, from a few years ago, still causes me to wince.]

In this country, the phrase “to take your chances” usually means to try something that may end up being a disaster—as in “You’re taking your chances driving on those bald tires.” But across the pond, they have another way of using this phrase.

I watch a lot of English soccer (which they call “football,” of course), and they use slightly different wording to express something quite different from the American version. To “take your chance,” in this instance, means to make the most of the chances presented to you. So, for instance, if a player is presented with a good look at goal and buries the ball in the back of the net, the announcer will say that he “has taken his chance well.” Alternatively, the losing coach might say that the reason his team lost was that they  ”didn’t take their chances.” Because good scoring chances come infrequently in soccer, you must “take your chances” if you want to win.

This meaning of the phrase was driven home for me early this morning on the Battenkill. Eric Rickstad and I hit the water at 5 a.m., hoping to tempt some big brown trout with streamers. Those of you who have fished the Battenkill, or who read this blog regularly, know that the river is notoriously tough: there are not many fish per mile, the browns can be extremely moody and finicky, and there isn’t much great holding water. The first two spots we tried—a big, deep bend and a riffle below a bridge—produced nothing. I was fishing a large olive streamer on a long leader, and Eric was working a dark, rubber-leggy thing with a sinking tip and a shorter leader, but neither setup seemed to be working. 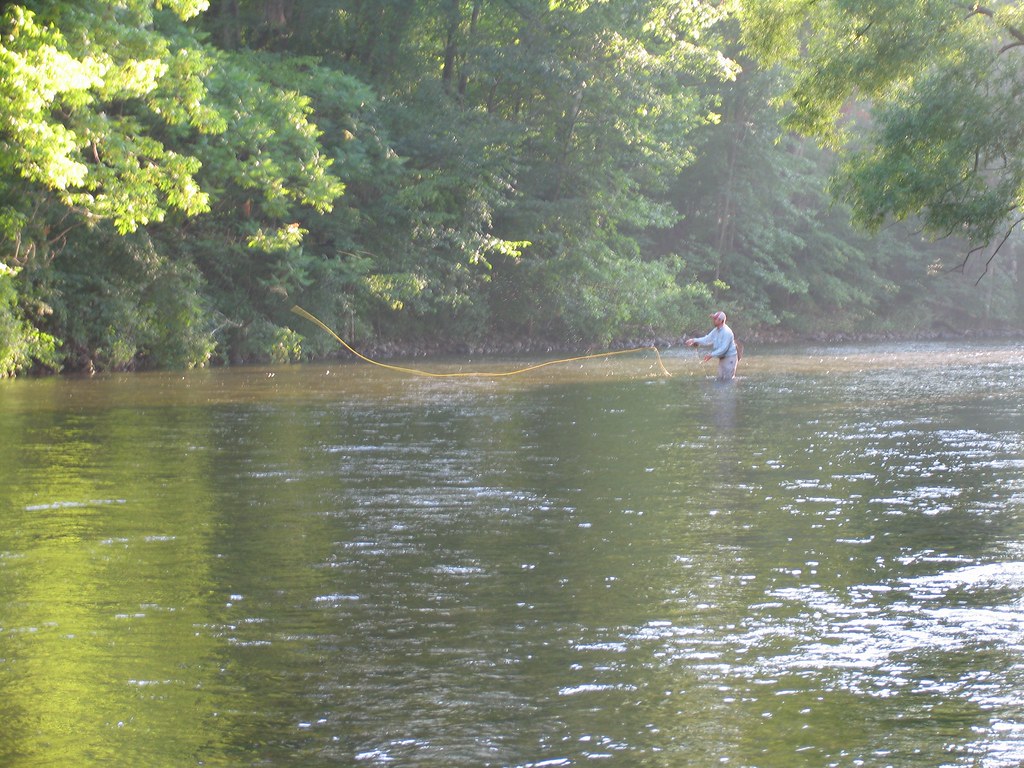 Eric Rickstad casting a streamer on the Battenkill in the early morning.
Photo by Phil Monahan

Back at the car, I decided to switch to my Battenkill standby: a size 4 Olive Conehead Woolly Bugger. From there, we headed to what we call the “Loch Ness Hole,” because of the grainy photo of a large fish I caught there a while ago. Eric went through first, swinging his fly deep, but didn’t move any trout. Since I had no sinking tip, I took a different approach, casting my streamer way upstream, high-sticking it while it sank, and then swinging it below me. I like this tactic because it allows your fly to get very deep, plus the trout can take the fly on the dead-drift if they’re lazy or on the swing if they’re aggressive.

On my fourth cast, the line stopped dead right in front of me—when my high-sticking was at its highest, of course—so I stripped hard and swept the rod rearward to set the hook and try to catch up to my fly. I felt the weight of a heavy fish, the rod bent sharply, and then I saw a flash of buttery color as the fish turned downstream. Its huge tail, about the size of my whole hand, waved toward the surface…and then my line went limp. The fish was definitely over 20 inches and probably 22 or 23.

Finding and hooking a fish like that on the ‘Kill is like getting a good look at the goal in a soccer game, and I knew immediately that I hadn’t “taken my chance” and would probably regret it. Sure enough, we didn’t see another fish for the rest of the morning. Because I suspected such an outcome, I had Eric photograph me as if I were holding the monster I had failed to land, and then had one of our brilliant designers, James Daley, PhotoShop in the ghost of the fish I had missed. It will serve as a reminder of just how important it is to “take my chances” on the Battenkill.

P.S.: Of course, James can never resist the temptation to mess with a photo that gets sent to him, so he created an alternative version, as well… 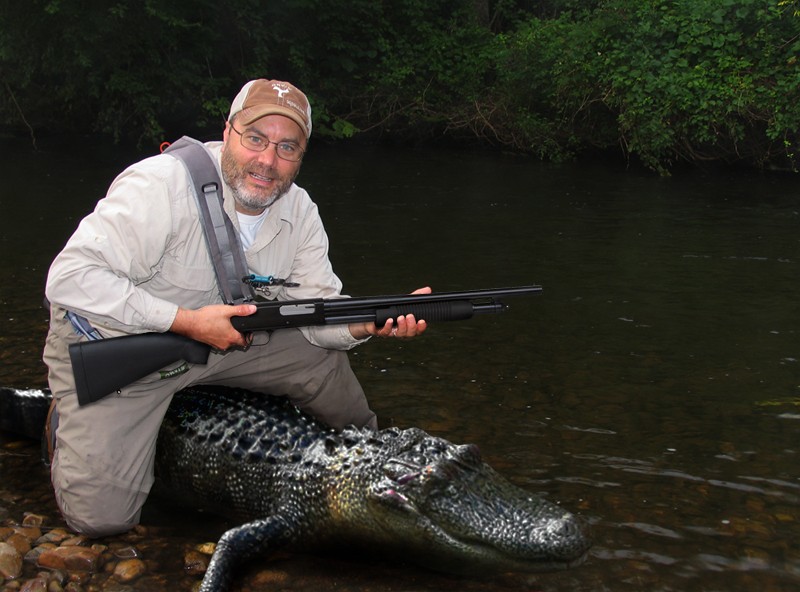 Whenever I send a photo to designer James Daley, I run the risk that he will make something
embarrassing out of it. In this case, I think I look pretty cool.
Photo Illustration by James Daley

8 thoughts on “Classic Fish Story: “Taking Your Chances” with Brown Trout on the Battenkill”