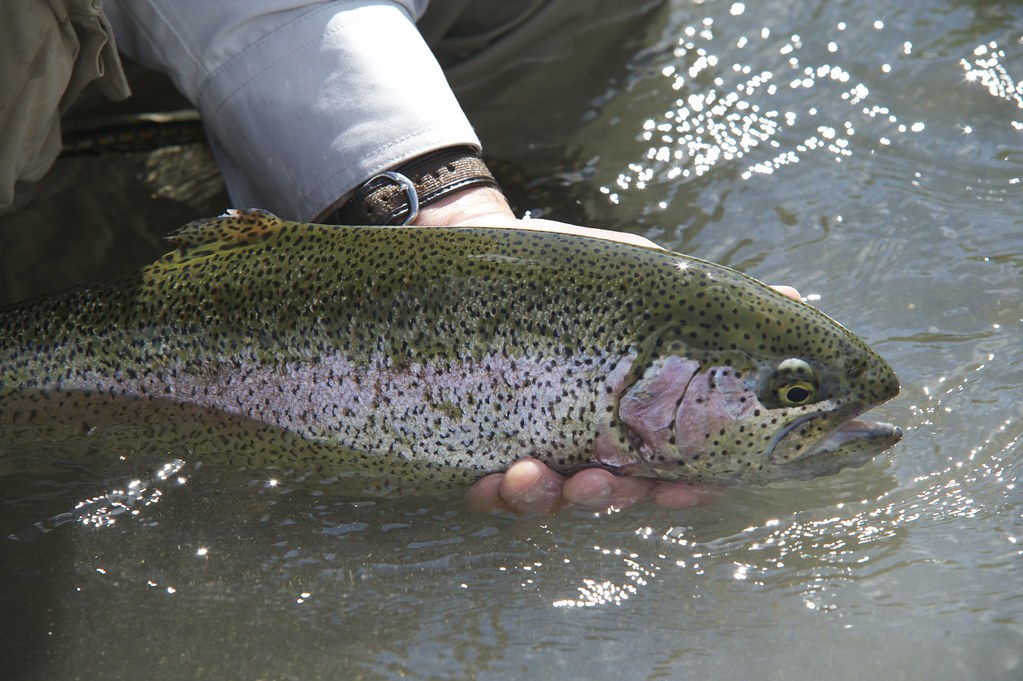 There’s little doubt that the best trophy shots keep the fish in the water.
Photo by Sandy Hays

[Editor’s note: Here’s something that, I think, bears reposting. I continue to see a lot of online criticism–some warranted, of course–of grip-and-grin photos, and I wonder if there’s a right way and a wrong way to get the desired result, which is better fish-handling. Make sure you read though the comments below the post for lots more good information and tips, as well as some differing opinions. When all else fails, remember the #keepemwet Principles.]

Because I run a blog and Facebook page that often post “grip and grin” photos, I see a lot of negative comments about the way the person in a photograph is holding the fish. The two most common criticisms are that the person is squeezing the fish or holding the fish with dry hands. We don’t post any images that show a fish on the ground or an angler with his fingers in the fish’s gills or mouth, so I don’t see those kinds of negative comments, which I generally agree with.

I am always amazed by the certainty with which the critic makes his assertions, and I wonder whence comes this absolute sense of rightness. Let’s look at two examples:

1. Your hands must be wet when you handle a fish. This is one of the first things a trout angler learns, and you’d be hard-pressed to find someone who doesn’t believe it. But how do we know this to be true? I put the question to Prof. Gary Grossman—distinguished research professor of animal ecology at the University of Georgia and author of the “Ask Dr. Trout” column in American Angler magazine—and his response blew me away:

Conceptually, the idea is that dry hands dislodge the protective slime coating on the skin of trout and make it easier for infections to grow and penetrate the skin. Nonetheless, there is little scientific evidence that dry hands alone cause dislodgment of protective slime. It is clear that handling itself, regardless of how damp your hands are, is the major cause of stress for fish.

I assume that even with this knowledge, most of us will continue to wet our hands before we handle a fish, out of habit and because the rationale behind the practice makes sense, but Doctor Grossman’s explanation makes criticizing someone else for dry hands less justifiable.

2. Squeezing a fish damages its organs and often kills it. Earlier this year, an article from New Zealand’s Bish & Fish website made the rounds of fly-fishing sites. Author Tony Bishop coined the term “grip and kill,” and he offered scientific diagrams to show that “[a] fish subject to external pressure to the heart and other organs may swim away on release, but many die soon after.”

There’s no doubt that Bishop’s article is full of great advice for the best way to handle fish, but many casual readers focused on the “kill” part. Soon thereafter, the number of comments arguing that a person in a photo was killing the fish seemed to skyrocket. Since I am skeptical of almost anything I see on the Internet, I emailed a fisheries biologist friend (who asked to remain anonymous), included a link to Bish’s article, and just asked, “What do you think?” Here was his reply:

There is a bit of hyperbole and of course no data offered to support his assertions. On the other hand, I do think that some fish die from grip and grins, but mainly because they usually require multiple “takes,” and the fish is often dropped on rocks a time or two. If you hold the fish too lightly, you are more likely to drop it. Putting a bit of pressure on a trout’s heart for a few seconds shouldn’t hurt it. The best thing to do, of course, is not take the fish out of the water, i.e., a net shot.

My point in all of this is not that there aren’t right and wrong ways to hold a fish. We would never show a photo of a person with his or her fingers in a fish’s gills, for instance. But we need to remove some of the self-righteousness from the discussion because, frankly, there’s not a lot scientific evidence to support these arguments that are used to batter other anglers.

So instead of telling someone that he’s “killing” the fish by squeezing it or holding it with dry hands, why not offer helpful suggestions in your comment? For instance, “Since most of the trout’s vital organs are right there, you might want to be careful of squeezing too hard” or “most anglers believe that you should wet your hands before handling a fish.” And I think you’ll find your suggestion is better received if it’s accompanied by “great fish,” “I love that river,” or “nice job.”

If someone is holding a fish incorrectly in a photo, it’s most likely because they don’t know better. Yelling at someone or accusing them of murder is not the best teaching method.

35 thoughts on “Repost: Why So Much Criticism of “Grip and Grin” Photos?”