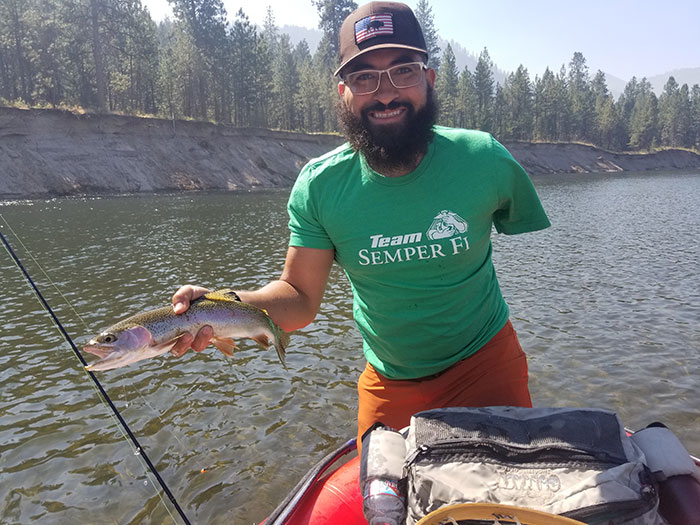 Manny shows off his first trout of the day, whcih was the achievement of his personal goal.
Photos courtesy Blackfoot River Outfitters

Over the past two seasons, the guides at Blackfoot River Outfitters in Missoula, Montana, have led 48 wounded veterans on multi-day-float fishing trips. Although the participants rave about the healing power and personal relationship-building of the experience, make no mistake: the growth and strength gained from these trips is not one-sided.

Arranged and fully funded by the SemperFi Fund and America’s Fund, all of the participants have been injured–many multiple times–during deployment. Some of the injuries are obvious: missing limbs, external scars, limps, limited mobility and the like. Others not so much: internal injuries, chronic back issues, recoveries from painkiller addictions, and the ever-present PTSD.

On the most recent trip, we took Manny. A vet who volunteered for the Marines at 17 as a .50-cal gunner (a job listed as second shortest in field life expectancy, just behind snipers and measured in hours of engagement), he was the recipient of the business end of a 40-pound IED while in Afghanistan. Manny’s left arm was so destroyed by the blast that they ultimately amputated it at the shoulder. His recovery was long and painful, his resilience determined and unshaken.

Manny heard about the fishing trip and signed up. He had never fished before, let alone fly-fished. His goal was simply to catch one fish on the fly. After scrounging up a relic of a fly reel–the Oren O-matic automatic–we put on a new fly line and attached it to a 9-foot 4-weight Helios rod. It wasn’t exactly a balanced rig. One hand, no problem: Manny could pull out the line with his teeth and wind up the reel spring with it in his lap. After a few hours, he learned to pump the rod and “reel” the line on the down swing. 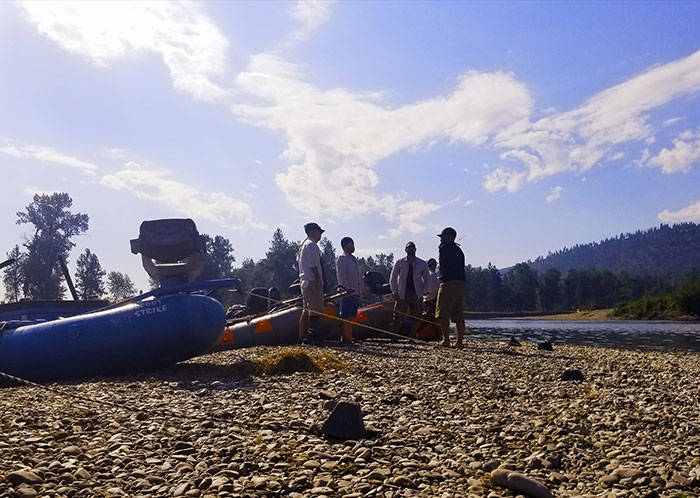 Before hitting camp the first night, he had already brought four fish to hand. He caught five the second day, and was high rod on day 3, boating 14 trout! He even sight-fished to a couple of sipping Clark Fork 18-inch rainbows. Manny’s excitement was palpable, and nothing can be more rewarding for a guide.

Al from Atlanta was on the same trip. Al is large and imposing at first glance, but his infectious smile gives away his delightful demeanor. While we were loading the gear boats, we noticed Al was kind of off to himself, sitting in the sun on river bank staring up at the timbered ridges. When we arrived at camp later that evening, he pulled up a chair and did the same thing. 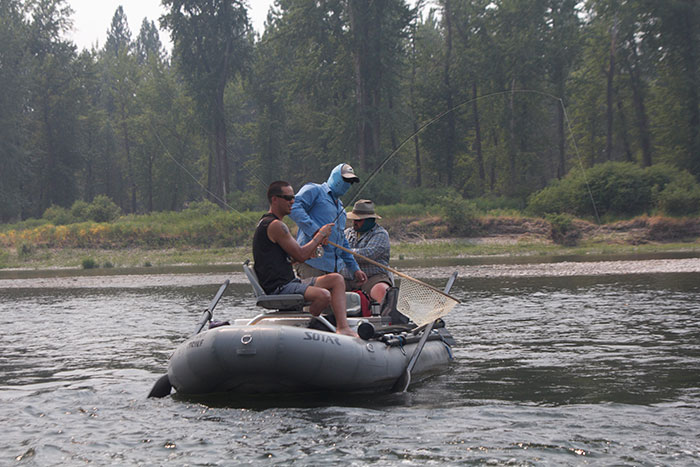 When we asked him of everything was alright, he looked up with that big smile and said, “Alright? Are you kidding? I never dreamed I would be in a place like this. I mean, I’ve seen it in magazines, but it is surreal to actually be here doing this. This is simply one of the most amazing things I’ve ever done.”

Al’s injuries are not readily apparent. After-dinner discussion revealed that the seemingly confident and jovial Al almost didn’t come on the trip, even up to the last minute. He struggles with anxiety and other mental scars from battle and felt he wasn’t up to hanging with a bunch of folks on some river in Montana. Following the trip, Al said he couldn’t wait to do another adventure with his comrades. in addition to bringing his grandson back to Montana for fly fishing. He felt the trip was “life changing.”

John Herzer and and his wife,Terri Raugland, own and operate Blackfoot River Outfitters in Missoula, Montana. 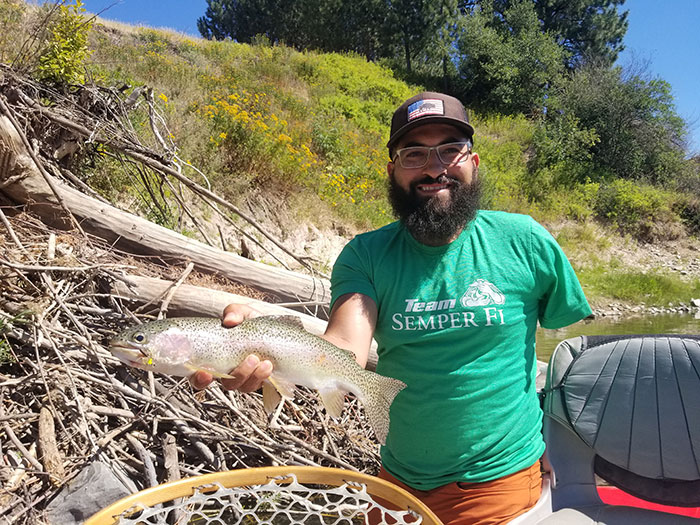 Manny stalked this 18-inch Clark Fork rainbow, which was sipping in skinny water.

4 thoughts on “Semper Fi in Montana with Fly-Fishing Vets”