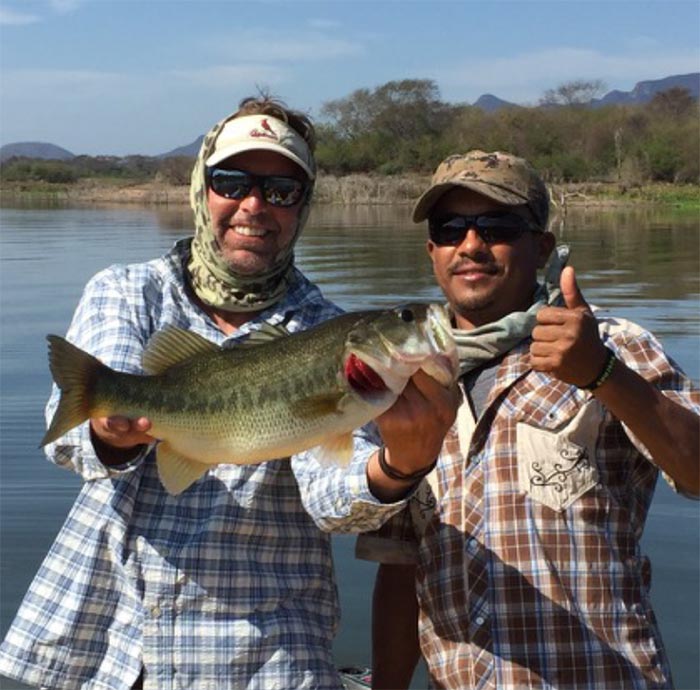 After hearing reports of huge largemouth bass south of the border for years from my brother, I finally convinced a group of conventional anglers that I could probably land a largemouth on a fly rod. The convincing evidence was provided by Steve Hemkens, after a June tarpon trip featured on this blog, and the planning began.

We headed to Mexico to fish Comandero and El Salto lakes with Ron Speed Jr.’s  Adventures, for large numbers of big ol’ bucketmouths. We flew into Mazatlan and were met with nice vans full of cold beer for the two-hour-plus drive into camp; two haciendas and a dining hall were nicely outfitted for us at Comadero. 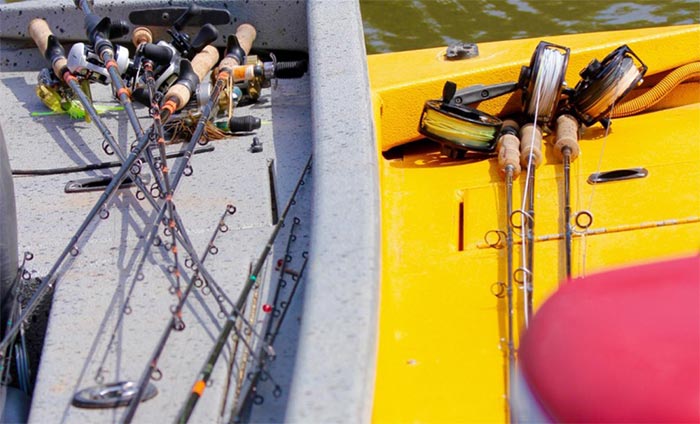 It was conventional tackle (left) versus fly gear, and the long rod held its own on Comandero.
Photo by Don Rogers

We set out for fishing, by shuttle bus, at 6:00 a.m. the next day. After an amazing sunrise over the Sierra Madres, Day One saw the fly guy hold his own and out-fish my conventional fishing brother, Curt. Chartreuse ruled the day that day and for the rest of the trip. Day Two on Comandero saw the natural order of the bass world restored, as my brother spanked me with a bait-caster during the “lizard” bite. However, during he topwater bite at the end of the day, a chartreuse popper mopped up and might have tied the score. 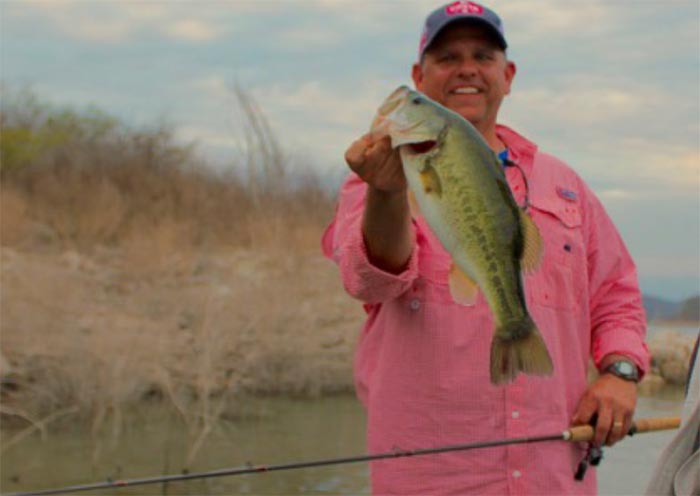 Curt Rogers shows off another bass that fell for metal and plastic.
Photo by Don Rogers

The last four days of the trip were spent on El Salto, where conventional techniques (wacky Senkos, watermelon lizards, and crankbaits) brought ludicrous numbers of fish to the boat. There was no way I could keep up with those numbers on the fly. It was tough fishing a fly rod in the back of the boat with a conventional angler in the bow. The guides know their fishing, but have very little experience with fly-rod techniques. I did have the pleasure of fishing with Oscar Rodriquez on Day Two, along with another angler who wanted to try the fly. Oscar has guided fly anglers a few times and knows his water very well. We caught a lot of fish that day, but it was the first two hours that provided the magic for the trip. The day started with a 3.5-pounder and lots of 1-pounders, and then my goal and I came tight. After a short open-water brawl, she took our fight to the weeds. Long arms prevailed, and my 8-pound goal was accomplished. 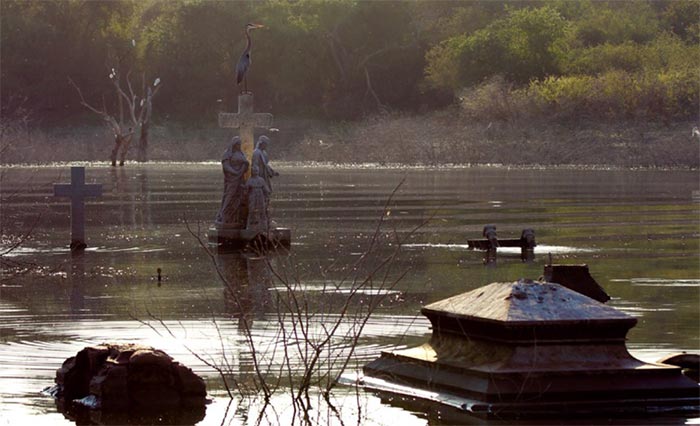 The famous flooded cemetery on Lake Salto is home to some big bass.
Photo by Don Rogers

Every other fish that day–and there were many–was just added joy on a day filled with mad laughter and shouting, until…..silence ensued when I came tight on a very large, double-digit fish that left a dinner-plate size hole in the lake as it inhaled my popper. Hand stripping works great on small fish, but I could have used a better drag system than my right hand on this beast. She snapped 20-pound flourocarbon tippet after swimming under the boat. 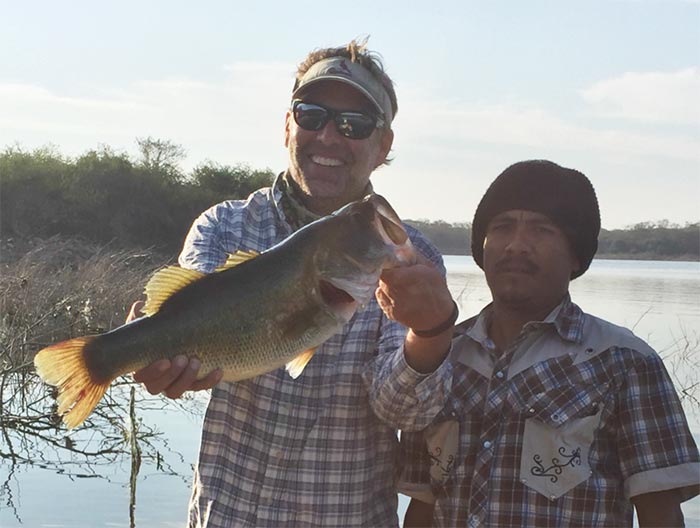 The author’s 8-pounder fulfilled a dream and was a fine fish to show off to the conventional anglers.
Photo by Mike Furney

Overall, a fly angler who can cast a large fly accurately between 25 and 70 feet in the wind can expect to average more fish than you can remember catching….but probably not as many as a conventional angler. Sharing a boat with a conventional angler is probably not the ideal situation, but a pair of brothers of the fly can clean up when the guide can concentrate on one technique. We landed 95 fish on the “con mosca” day. You fish from sunup to sundown, with a two-hour lunch and siesta back at camp. The trip was a ton of fun and I would recommend adding the bass of Mexico to any bucket(mouth) list. 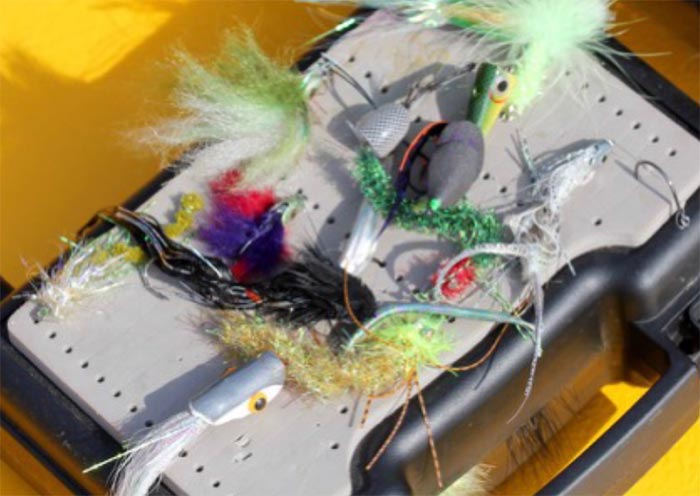 Every one of these fly patterns caught bass on the trip.
Photo by Don Rogers 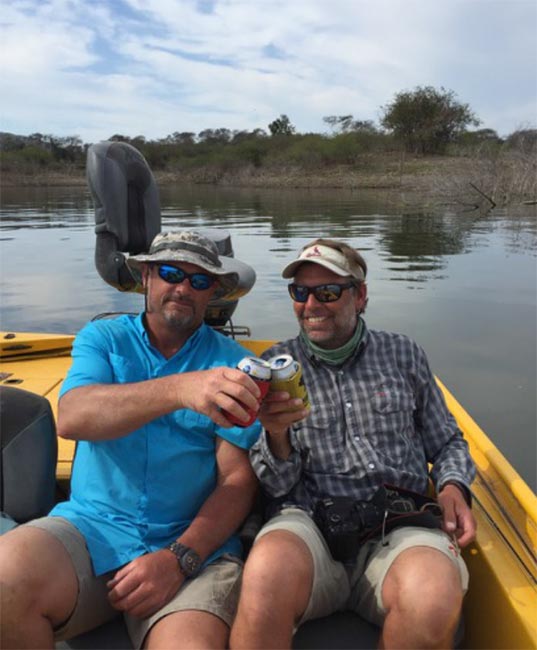 Wayne Hughes and Don Rogers share a celebratory beverage on the water.
Photo by Oscar Rodriquez 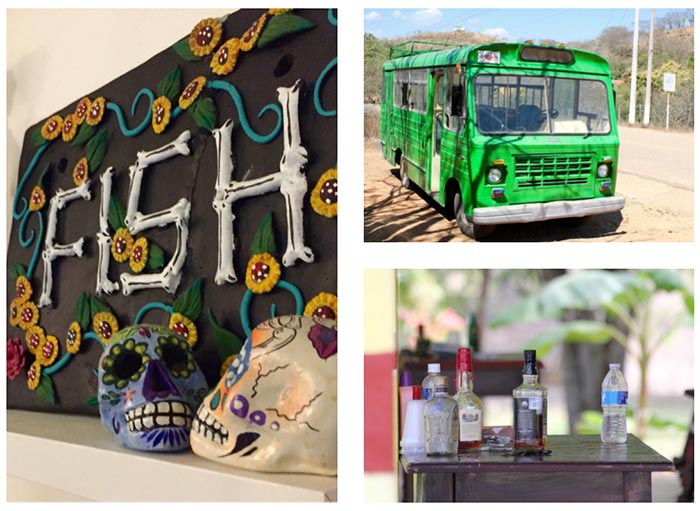 Bass fishing in Mexico is a great experience, even when you’re not casting a fly..
Photos by Don Rogers

One thought on “Photos: Sibling Rivalry and Huge Mexican Bass”