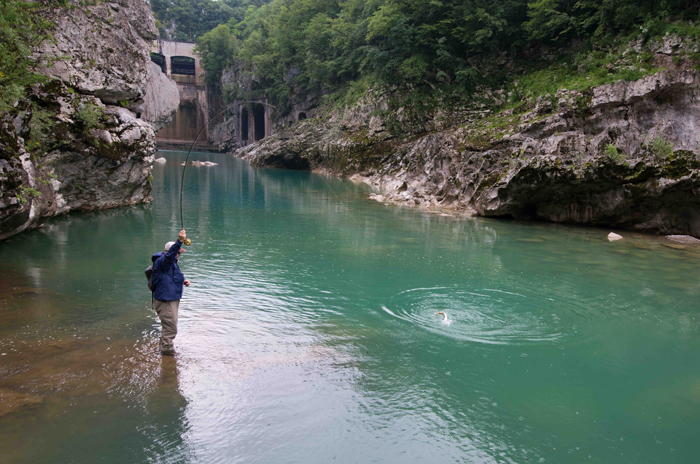 Right off the bat, we were into fish. Look at that pose: just like on my hat.
All photos by Sandy Hays

We awoke this morning to driving rain in Kobarid, so we had a leisurely breakfast and I got some work done. When the weather broke, Matt arrived at our guest house, Pri B’Zjak, and we headed out for what he called “a little canyoneering.” We drove downriver, below the village of Čiginj, where the river is impounded by a pair of dams. After a somewhat harrowing descent, we found ourselves in a glorious theater of rock and concrete, with the blue Soča at the bottom. 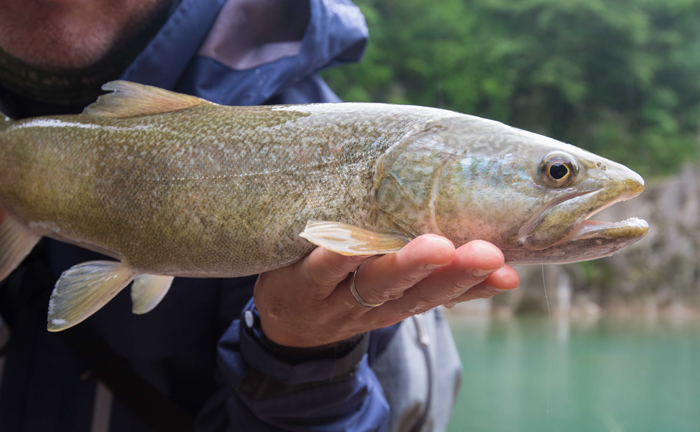 My first big marble trout, which put me in the 50 cm Club.

I’d been thinking all week about trying a DDH Leech, since I have caught many species of fish on them and I wanted to see if marble trout would find them attractive. I tied on an olive version, waded out onto a sumberged rocky point, and started casting to some rocks on the other side of the river. On my third or fourth cast, something hammered the fly, and the fight was on. At first, I thought it was a rainbow, but as the fish came closer I could see that it was a gorgeous marble, much bigger than the one I’d caught before.

When Matt finally had it in the net, we could admire all 21 inches of it. Although it wasn’t my first marble trout, I felt that that it was my first real Slovene marble, the fish I’d traveled here for. Two casts later, I had another big strike, and a second, smaller marble came to hand. 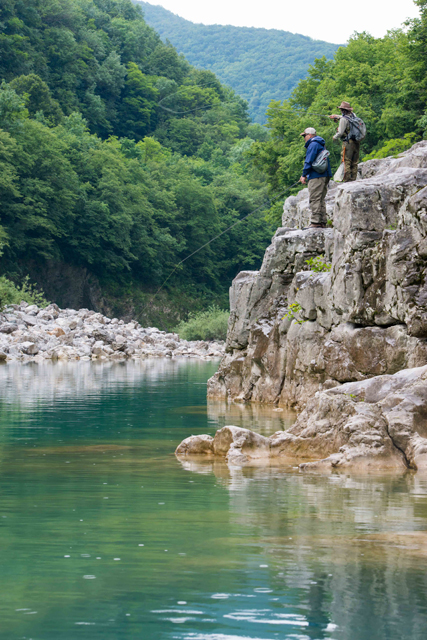 Matt and I fish from a rock ledge, looking for big marbles in a deep, blue pool.

From there, we worked a few more pools downstream, and the rainbow fishing really picked up. At one point, I was fishing a large, chartreuse jointed streamer, and a rainbow followed it right up to the bank, but wouldn’t commit. With just the leader outside the rod tip, I picked up and put the fly in front of the fish again. I teased it with the fly, in the way you would tease a boatside pike, and the fish struck. It was a very cool visual experience.

We’ve got one more day of fishing left, and we’re heading back up the small stream we were blown off on Tuesday. I have a feeling that it’s going to be a tremendous day. My only regret so far is that we haven’t had any real dry-fly action, so I’m looking forward to seeing some fish on top. 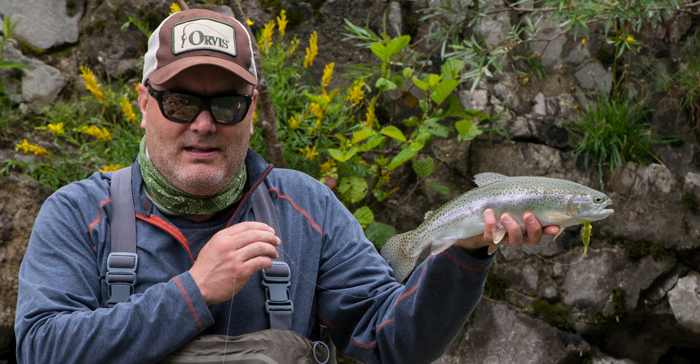 This rainbow wouldn’t be denied, as it struck the giant streamer on the second try.

Slovenia Day Three: Why Are There So Many Songs About Rainbows?

11 thoughts on “Slovenia Day Four: Into the Soča Canyon”