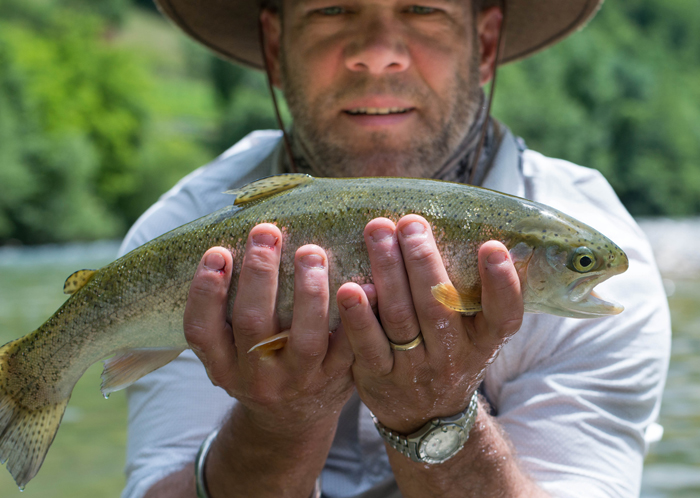 Sandy Hays shows off the first fish of the trip, a rainbow that ate a small olive streamer.
Photo by Phil Monahan

Day One of our Slovenian adventure began with a leisurely breakfast and a discussion of how we wanted to get started discovering all the angling opportunities around the small town of Kobarid. Our host, Matt Calderaro, of Soca Fly, lobbied pretty hard that we should kick things off by trying to catch a true monster.

So we headed south along the Soca River, to the town of Most Na Soci, where we turned left to head up the Idrijca River (pronounced EE-dreet-sa). We parked the car, geared up, and headed down to the river. We crossed the river and hiked right to a pool where Matt said he’d seen a true giant marble trout. In the unbelievably clear water, however, we saw quite a few smaller marbles and some giant chubs. (Keep in mind that some of these “smaller” marble trout topped 24 inches, however.) Matt was flummoxed that his prize fish wasn’t visible, and Sandy and I wondered if the man was peddling a fish story.

We worked the long pool for and hour or so, trying to tempt the marble trout with nymphs and streamers, but the combination of low water and high midday sun made them remarkably spooky. So, we decided to move on. As I was reeling up, Matt was walking ahead down the river, when he suddenly yelled, “There she is!” and pointed to the lower portion of the pool. Sandy and I ran through the woods along the bank to where Matt was standing. Our eyes followed his pointing finger to the middle of the channel where we saw a. . .What the ^%$* is that? It looked a lot like a trout holding over a white-sand bottom, but it was simply massive—easily the biggest trout I had ever seen (and I guided in Alaska for three years). My guess: the fish is well over 30 inches long. 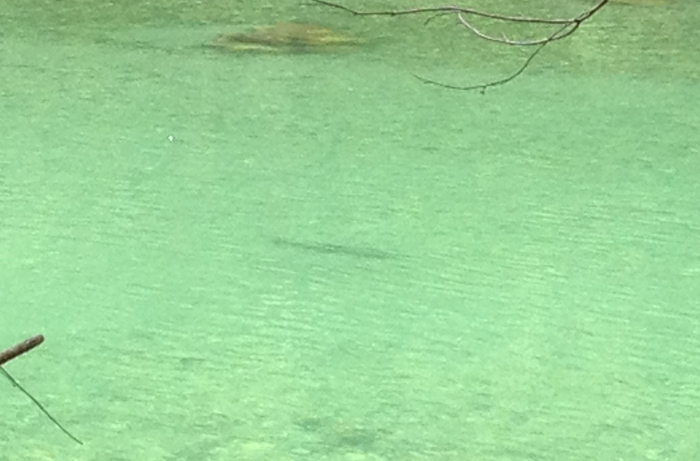 It’s hard to depict how big this fish is because there’s nothing next to it for scale. But trust me, it’s a beast.
Photo by Phil Monahan

We spent another hour trying to hook the beast, with Sandy acting as spotter while Matt and I tried both upstream and downstream approaches. But the big fish always seemed just out of range, as wily old veterans often are. Reluctantly, with a few longing looks at the trout of our dreams, we headed downstream. We swung streamers for awhile, with me chucking a monster pattern in search of marbles and Sandy working with something more normal size. Sure enough, right before lunch, Sandy hooked a nice rainbow that took to the air almost immediately, and when Matt scooped it in the net, we had our first Slovenian trout.

It was fun and all, but now all we can think about is that incredible—and incredibly huge—marble trout. We have four days left to figure out a way to catch her.

6 thoughts on “Slovenia, Day One: Discovering the Monster Marble”