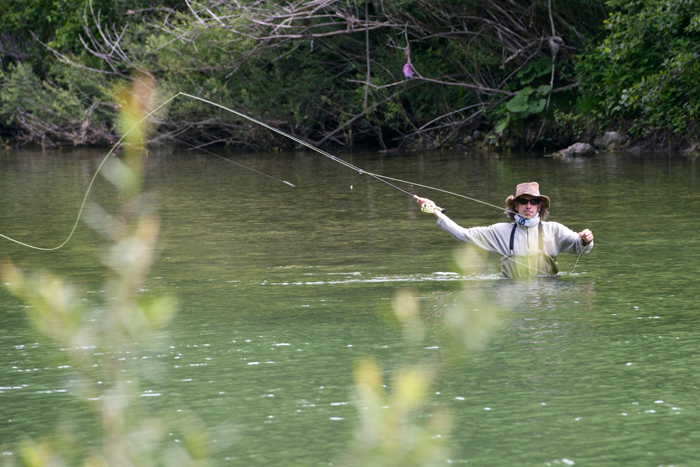 Matt Calderaro wades as deep as he dares in an attempt to get a fly to Moby Marble.
All photo by Sandy Hays

Our second day in Slovenia began with a 5 a.m. wake up because our plan was to make a second assault on Moby Marble, the giant fish we had seen the day before. Our guide, Matt Calderaro of Worldflyangler, had a plan. Because the fish lived in a long pool that is too deep for wading and the forested banks offer no room for a backcast, we would position on angler above the pool and one below. Then, we would wait for the fish to move into range. When marble trout are “happy,” they tend to swim about quite a bit. We hoped this beast would swim close enough for one of us to get a fly to her.

But after about and hour and a half of repositioning, making long casts, and listening to our spotter, Sandy, call out the fish’s position, we decided to bag the operation. There is a reason that fish is so big: she lives where fly fishers can’t get at her. And since it’s a fly-fishing-only river where no boats are allowed, the odds are in her favor. Matt believes that he will one day hook the beast (landing it will be another matter altogether), but it will require all the planets to align perfectly. As for me, I was just happy to have made the acquaintance of such a spectacular specimen. 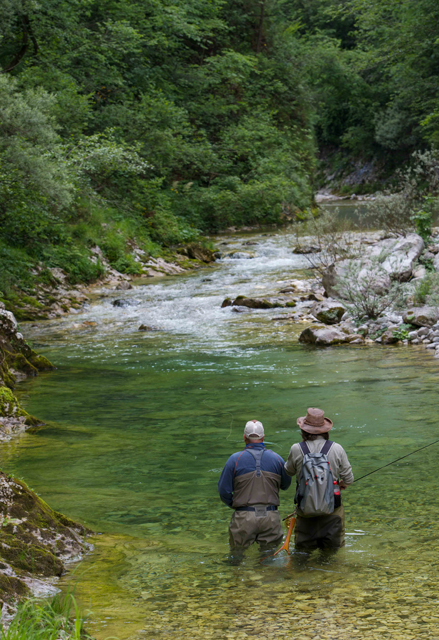 Our second river of the day was a gorgeous freestoner running through a steep canyon.

So we took a break at a local cafe, as Europeans are wont to do, and then headed to a small mountain stream that flows through a gorgeous canyon. We brought just two rods for the three of us: a 4-weight Superfine Glass for dry flies and a Helios 2 5-weight for nymphs. (Strike indicators are not allowed in Slovenia, so all nymphing is “naked.”) At the first pool we came to, Matt spotted a marble trout and told me where to cast the dry. But after several drifts, it was clear that nothing was coming to the surface. Matt decided to chuck the nymph into the hole to see if anything would happen, and a big marble trout slammed the fly. After a brief, close-quarters fight, the fish was in the net.

It was our first close look at this fascinating species, and its beauty and strangeness were fascinating. The fish had vermiculations on its back like a brook trout, to which the marble trout is not closely related. Its fins seemed oversize, and they had a yellowish hue. Marbles are quite snaky, as well, and they have sloped foreheads, which perhaps help them maintain in heavy currents. 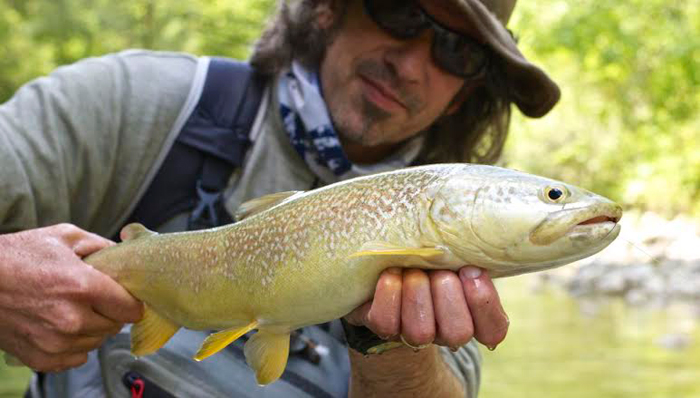 Matt’s marble trout was our first look at the spectacular species up close.

Two pools later, it was my turn to try the nymph, and I landed my first marble—a little guy, but a memorable fish all the same. This was turning out to be a productive afternoon, but then it seemed as if someone threw a switch because the trout in the river developed lockjaw. We could see them holding near the bottom of various pools, but we couldn’t entice them to eat the dry or the nymph, and several pattern changes made no difference. Then we heard the thunder.

Dark clouds appeared over the mountaintops upstream from us, and spitting rain started to fall. It seems that this was enough to put the fish down, and we started to plan our escape from the canyon before the deluge came. But just for laughs, Sandy tied on a mouse pattern to throw up into the last pool we fished. I thought he was nuts, and sure enough, he didn’t get any takers on the first four casts, but on the fifth, a monster rainbow trout charged and attacked the mouse in perhaps the most vicious trout strike I’ve ever seen. All three of use screamed, as the water’s surface exploded and the fish’s back appeared. 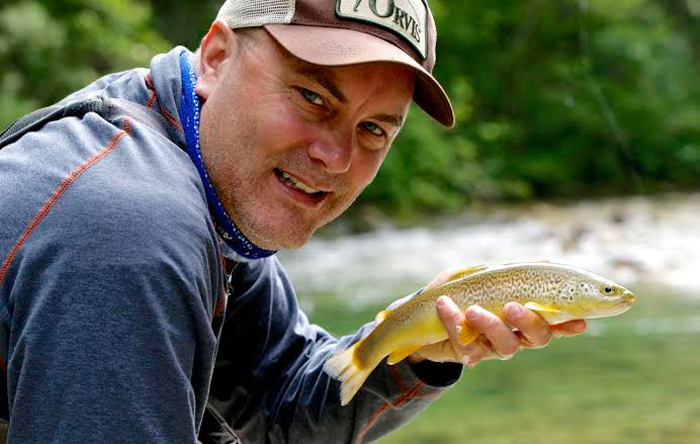 My first marble wasn’t trophy size, but any species first is a memorable catch.

But alas, the big rainbow didn’t get stuck, and the mouse pattern came rocketing back at us as Sandy tried to set the hook. It gave us plenty to talk about as we hiked out of the canyon in the rain. . .

7 thoughts on “Slovenia Day Two: Working Hard for the Marbles”