Chris Santella is a pretty big name in the world of fly fishing, as the author and editor of many books–including Fifty Places to Fly Fish Before You Die and The Tug is the Drug–and a regular contributor to The New York Times. He’s also a strong advocate for protecting wild steelhead and a musician, and his most recent project is an ambitious attempt to combine these passions.

“The Last Steelhead” is a set of 11 songs recorded by Chris’s group, Catch & Release Band, all about wild steelhead and the threats to their very existence. Chris calls the project an “Eco Rcok Opera,” and here’s how he describes its genesis:

In the spring of 2017, I researched and wrote a story for “American Angler” on the plight of wild steelhead in the Columbia Basin, which impacts Oregon, Washington and Idaho. As a die-hard Deschutes River steelhead angler, I was aware that runs were shrinking—but had no idea conditions were so dire. Like so many of the world’s environmental woes, most of the factors impacting the well-being of wild steelhead have been instigated by humans. “The Last Steelhead” attempts to explore some of these factors, a bit of their history, and the attitudes surrounding our behaviors and policies that seem to be standing in the way of taking meaningful action to prevent another extinction. It’s my opinion that by using the best available science and re-directing resources accordingly, we can avoid a future without wild steelhead…and “The Last Steelhead” will be just a piece of music, not an ecological statistic.

If you dig rock operas–think The Who’s “Tommy” or Pink Floyd’s “The Wall”–then you’re gonna dig this. The band is great, the songs are well constructed, and the message is powerful. 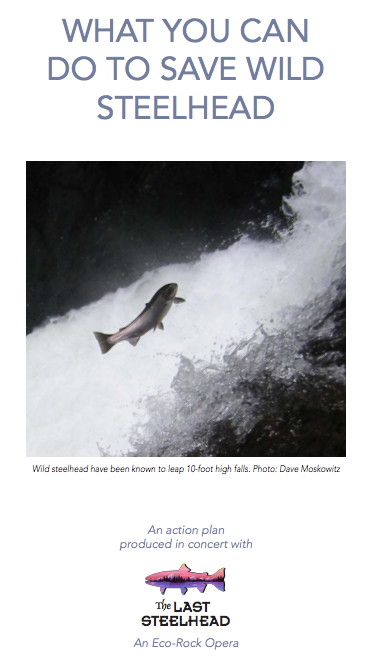 Chris has also produced a seven-page educational pamphlet called “What You Can Do to Save Wild Steelhead,” and everyone who cares about wild fish should read it. Too many conservation messages lack some important components: hope for the future and concrete ways that the average Joe can make a difference.  This pamphlet offers both.