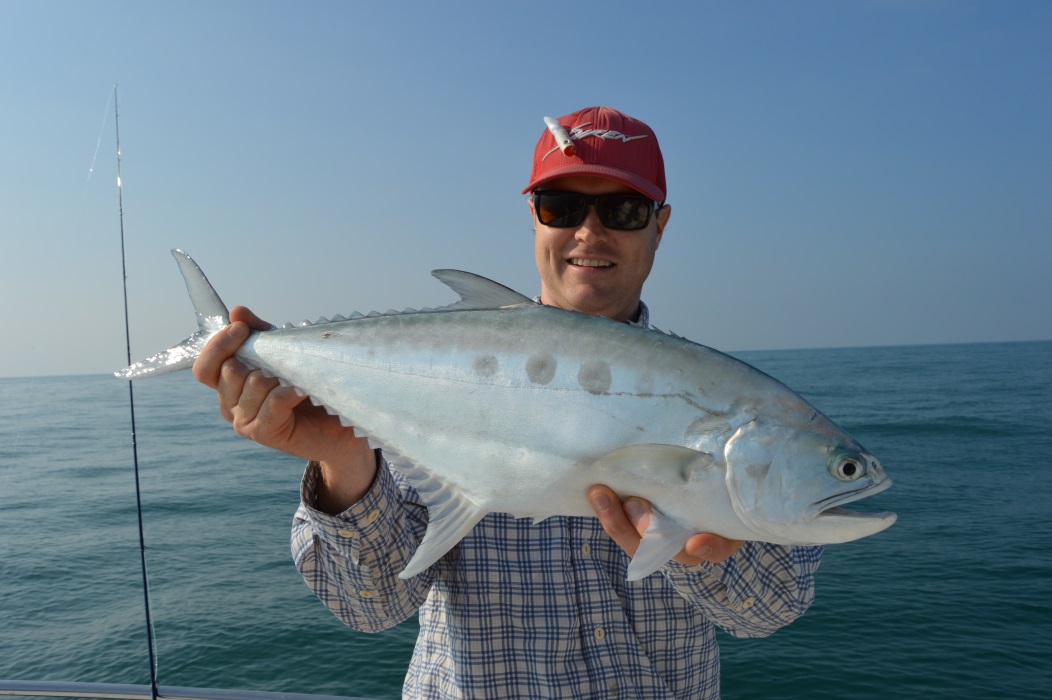 The talang queenfish (Scomberoides commersonnianus) is a prime target in the Arabian Gulf.
All photos by Brown Hobson

Over the Christmas Holiday, my wife and I visited family living in Abu Dhabi, United Arab Emirates. For those of you who don’t know where in the world that is, the UAE is a small country on the southeastern tip of the Arabian Peninsula, with a coast line on the Arabian Gulf. The country is best know for  the crazy amount of oil it produces and for its largest city, Dubai.

My family has been over there for three years, so the region has been on my radar, and last winter I read about Jeff Currier’s experience fishing out of Dubai on his way to the Sudan. Jeff fished with Nick Bowles of Ocean Active and reading about his experience piqued my interest. Once my wife and I planned our trip, I contacted Nick to see about setting up a day of fly fishing. We got the date worked out, and he prepared me to fish for talang queenfish and yellow trevally. 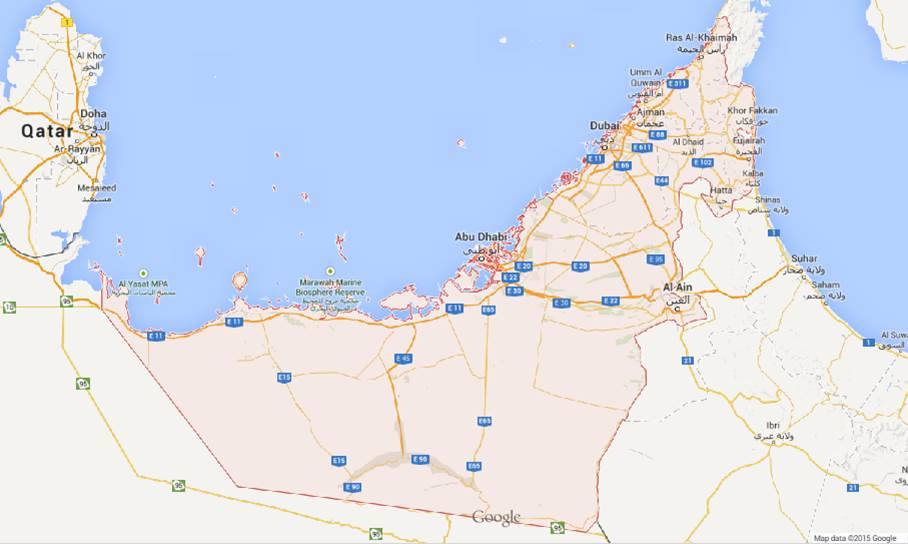 We landed in Abu Dhabi on Christmas Eve at 3:00 am local time and enjoyed visiting with family and touring the city until December 27, when we headed to Dubai. My guide, Cameron Mundy, texted back and forth with me the night before to get everything set up. We switched our trip from a full day to a half day because the queenfish were disappearing after 12:00, and that was our primary target. We met at 7:00 am the next morning at the Jebel Ali Golf Course Marina and drank coffee while we got acquainted with each other waited for the boat to be readied. The marina was about 15 km south of Dubai and immediately north of the new Palm Jebel Ali development.

Cameron is a native of South Africa, but he spends eleven months a year in the UAE and Oman. Ocean Active mostly operates out of a couple of locations in Oman, and the fishing looks spectacular. They catch a wide variety of fish there, including different pelagics and some large Giant Trevally. I would love to go back sometime and fish with them in Oman, but I didn’t have time on this trip. 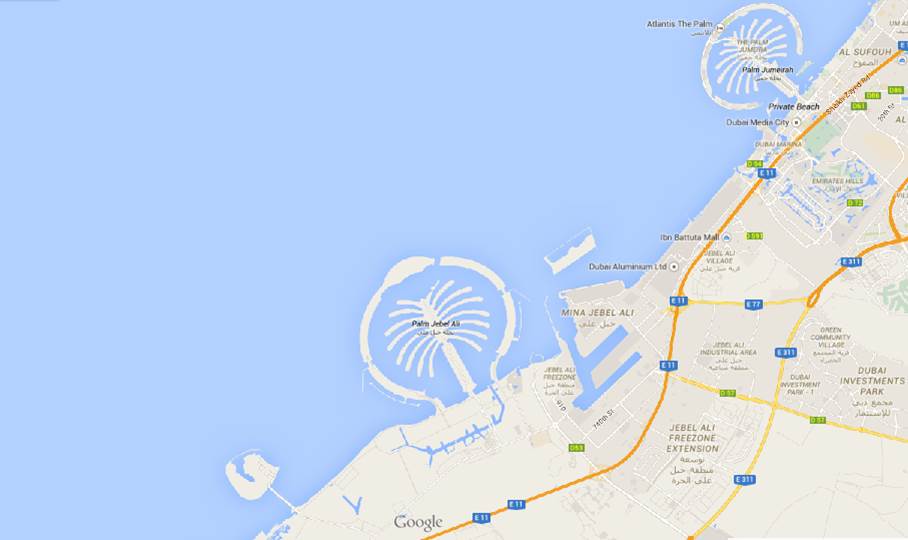 The boat left from a marina at the base of the palm-island development under construction.

Our boat was ready at 8:00 sharp. Ocean Active isn’t currently running their own boats in Dubai so we had a captain from the marina and that freed Cameron up to guide me from the bow. We left the marina and turned slightly east after we passed the palm.

The gulf around Dubai doesn’t have a ton of underwater structure so Cameron had us head for the shipping channel because it had a five-meter drop-off. We cruised the edge of the channel looking for birds and didn’t see any for about an hour. Our plan once we found birds and fish was for Cameron to cast a hookless topwater plug and tease the school close enough for me to make a cast with my fly–the old bait and switch. I had an 8-weight with an intermediate line and a size 6 pearl Gotcha. We cruised up the channel headed for a couple areas a few miles out where Cameron had been finding fish. 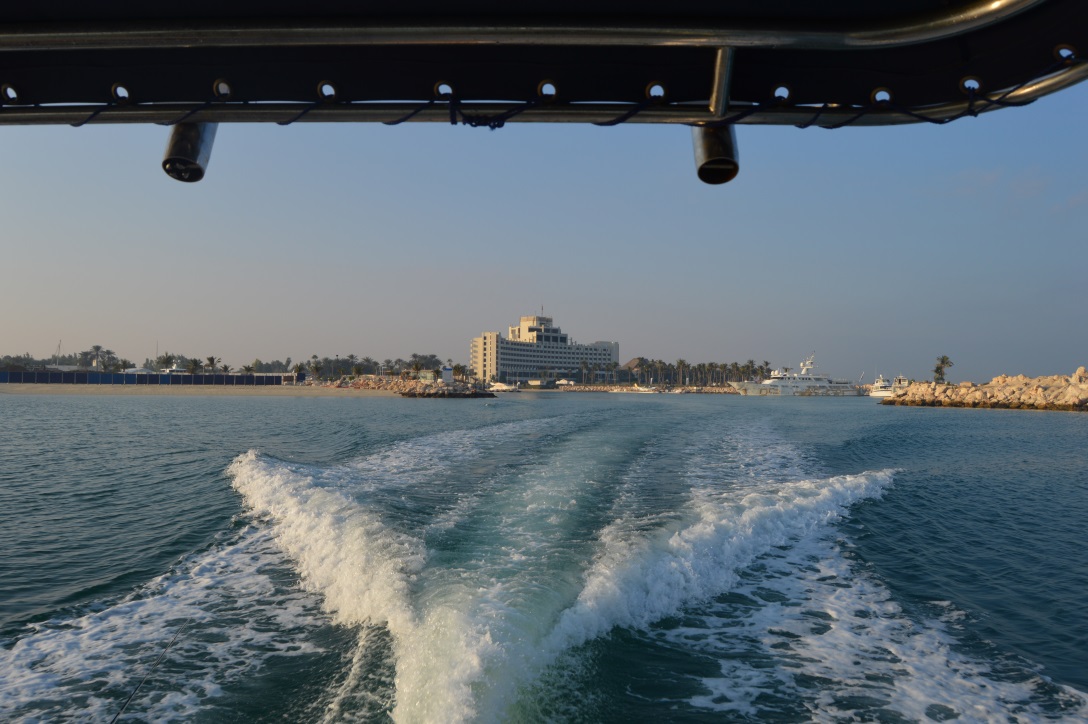 At about 9:30, we arrived at a spot in the channel where we saw dozens of fish-trap buoys, a good sign. We slowly cruised around, watching the birds. They were flying around in a manner that made us think they had seen bait moments earlier. Cameron was blind-casting his plug, and I was warming up. Suddenly we noticed a school of good-size queenies charging toward the boat. One fish did look at Cameron’s plug, but they were gone very quickly. I probably had a shot at the fish, but it was my first shot and happened in fewer than five seconds. We spent another 10 minutes waiting for the school to surface again, to no avail. We continued up the channel and finally found another school of fish. These queenies were pretty small. We weren’t being picky at this point, so I shot my cast in there and started a roly-poly retrieve. Nothing was following the plug, but because we were only sixty feet from the school I kept shooting casts in there. On the fourth cast, I hooked up. The fish instantly dove straight down.

The runs were short but pretty powerful, and after about five minutes I landed my first queenfish. It was small and a little misshapen, but I was psyched. By the time we finished the photos and resumed our hunt, the fish were gone. That would be the theme of the day. The fish would not stay on the surface for very long at all. 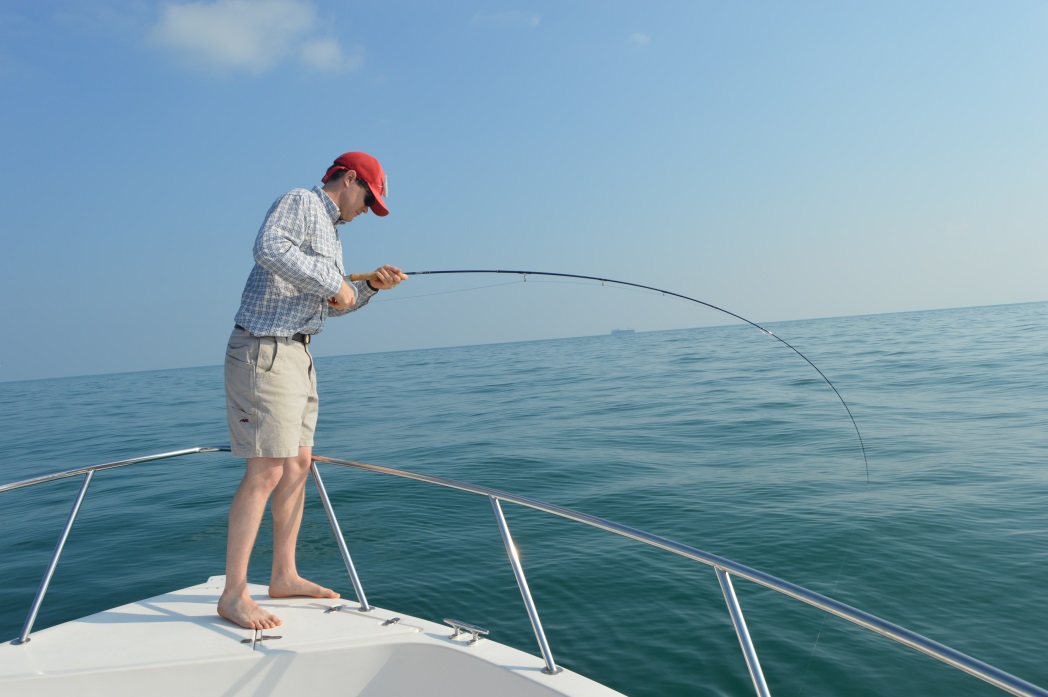 The runs were short but pretty powerful, and after about five minutes Brown landed his first queenfish.

About thirty minutes later, we found another promising school of fish with lots of birds working. No fish would follow the plug, but I was able to get my fly into the school and about halfway back to the boat a medium-size queenie hit my Gotcha. I saw the fish nail the fly, and even if I hadn’t, I could tell he was a larger fish. Instantly all my line was ripped off the bow of the boat and into the water. This fight lasted closer to ten minutes, and this fish’s power was pretty impressive. Again no crazy long runs, but there was no turning or stopping when he did go.

My third queenfish followed quickly thereafter. The school we were on only moved a few hundred yards, and by the time we were set up again, there were several hundred queenies busting bait simultaneously. We stopped the boat and I made a cast, but because the boat was still moving I couldn’t strip fast enough to set the hook when the next fish ate. Luckily, they were so happy that my second cast into this school was a success. It was a really cool sight, and the third fish was on my fly within a second of it hitting the water. 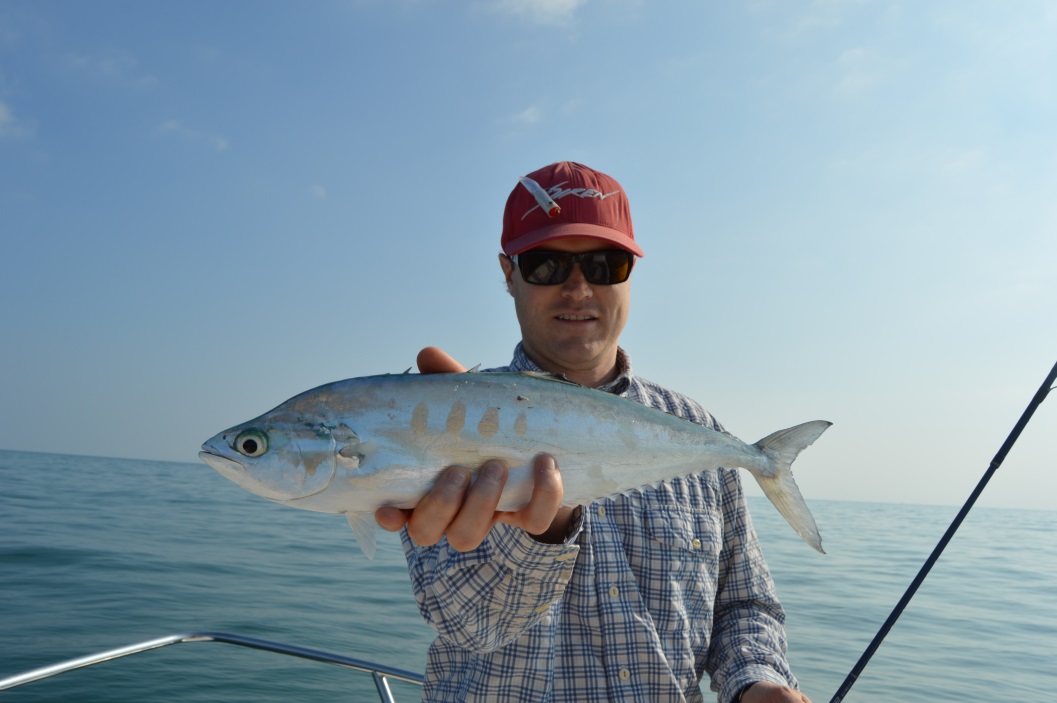 It was no giant, but Brown’s first fish was an exciting new species to add to his life list.

After I landed my third fish, the school disappeared, and we spent another hour looking for more queenies. We had about forty-five minutes left, so we decided to head back toward the marina and fish some of the rock jetties along the palm looking for yellow trevally. We set the boat up so we could drift down the rocks blind casting as we went. I did get a bump from something, but no hook up. A second species would have been cool, but I was totally content catching a few fish of a new species in a totally new place. The UAE is a really neat place to visit, and if you are there I highly recommend calling Cameron at Ocean Active. He is a cool guy with a neat fishing background who will put you on fish. If you have any questions about the trip I will be happy to go into further detail.

One thought on “Story and Photos: The Arabian Queens of the UAE”