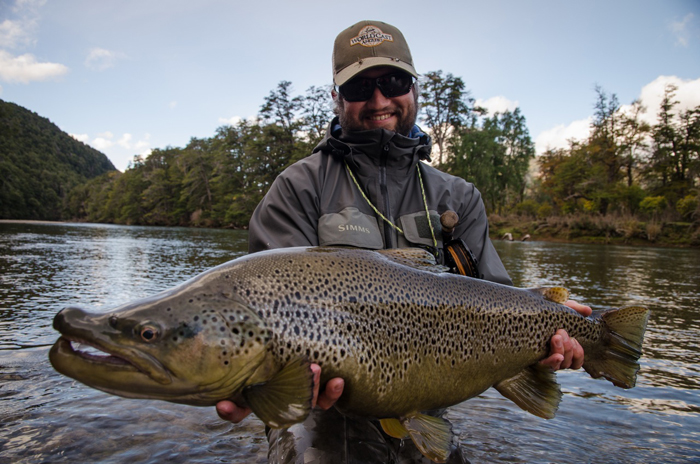 Mike Dawkins is all smiles as he cradles a fish of a lifetime on Patagonia’s Rividavia.
All photos courtesy Mike Dawkins

It is no secret that most of the largest trout landed come to the net in the spring and fall—before the summer heat begins and you cannot escape the brightness of the sun; after the first snow falls on the mountains and the leaves begin to change; and when the waders, rain jacket, fleece, hats, and gloves are always accessible and worn to brave the elements. There is something about those times of year where big fish feel comfortable, aggressive, and apt to feed. Importantly, anglers have a genuine chance to target them. Don’t get me wrong: there are plenty of large fish landed during the summer, but the words “fall” and “brown trout” are harmonious and complementary. 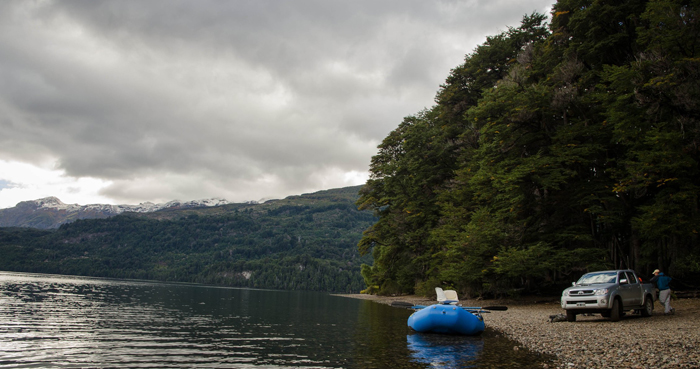 Unpressured waters and gorgeous scenery are the hallmarks of the region.

Fall in Patagonia is no different than fall in the Rocky Mountains; it just occurs during the months of April and May. So I was very excited when WorldCast Anglers organized a trip for clients and customers to visit our friends at Patagonia River Guides to experience their fall fishing season.

The Rividavia—crystal-clear water, large trout, and lush rainforest-like environment—is one of those rivers that immediately captures an angler’s heart. Glacial tinted water flows over large boulders, creating pools, runs, and riffles that would make any fly angler drool. Some trout that hold close to downed timber throughout the river system can be targeted with streamers, while others hold in slower water types that beg for a large dry dropper rig, a technical nymph setup, and even small dry flies. If the powers that be asked me to build a trout river, I would build the Rividavia. 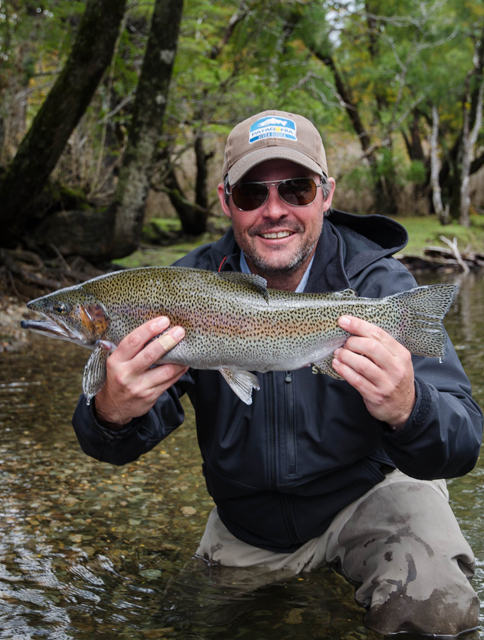 The fish had been fattening up on mice all summer long.

Throughout the summer Los Alcerces National Park, outside of Patagonia River Guides lodge in Trevelin, experienced a large bloom of Colihue cane. This bushy grass, a bamboo subspecies, blooms every seventy years in the Trevelin/Esquel area. Most importantly, the Colihue Cane seed is the preferred food source of rodents, especially mice. We all know stories about fish eating mice, but never like this. The mouse population is so great that the trout have been busy packing on the protein and growing to monstrous sizes. 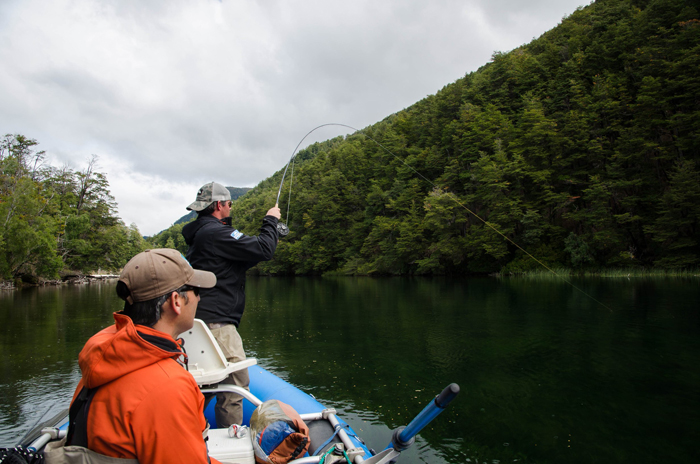 This is not the river, nor are these the fish, for a delicate 4-weight.

Esteban Oszust, Patagonia River Guides head guide, instructed us to begin working streamers on full-sinking depth-charge lines around “La Boca” – the mouth and beginning of the Rividavia. I could see that a large brown trout was chasing my Sparkle Minnow streamer. I began to strip the fly faster and faster and faster until the fish ate. I set the hook, and the fish regurgitated a large piece of flesh from a mouse it had consumed that night. The disgusting mouse flesh dangled in the current as we landed that fish and a couple others, and then moved though La Boca to the other portions of the river. 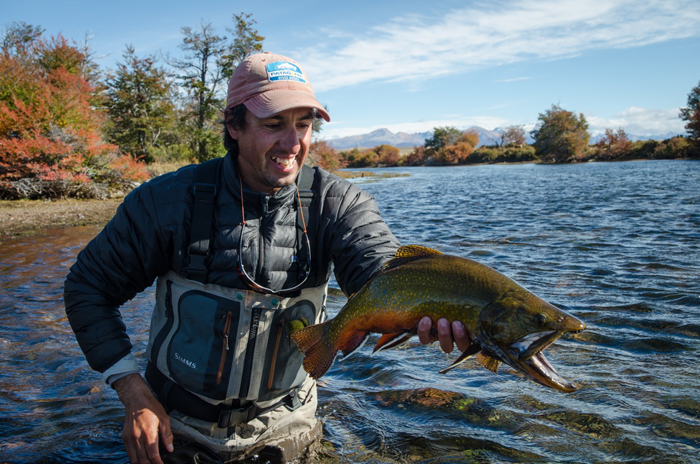 Even the brookies grow to epic proportions.

We spent the rest of the morning and afternoon sight-fishing to large rainbow trout in the upper portion of the river, moving from fish to fish, targeting them methodically and dissecting each angling situation as the best we could. The Rividavia is not an easy river to fish, but the rewards can be great. Most importantly, you learn a lot as an angler. The water is so clear that you can see every movement of your fly. Finally, we spotted a couple of the fish that my friend and Patagonia River Guides guide, Mauricio, had told me about the first night we arrived in Trevelin. They were monstrous! 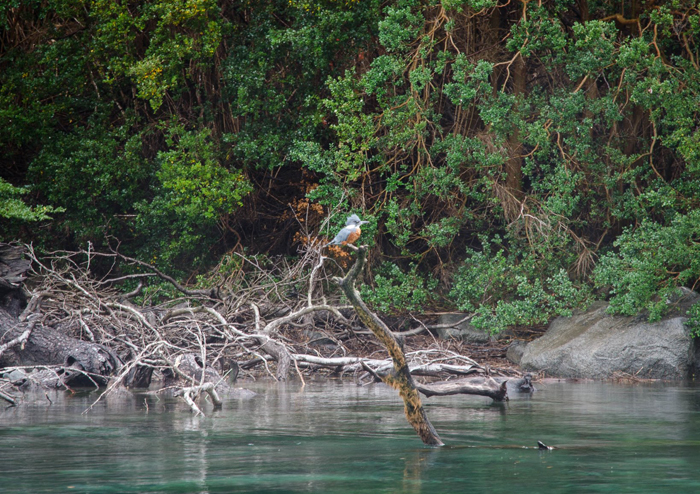 The scenery and the wildlife along Rividavia are second to none.

The color black had been a good producer under the overcast and rainy skies of the Patagonia fall season. We decided upon a size 2 Black and White Dali Lama to see if we could trigger any of these monster fish to eat. I tied the fly on to some 12-pound Maxima connected to a 200-Grain Depth Charge line on my 9-foot 6-weight Saltwater Helios 2. Four casts later, all hell broke loose! 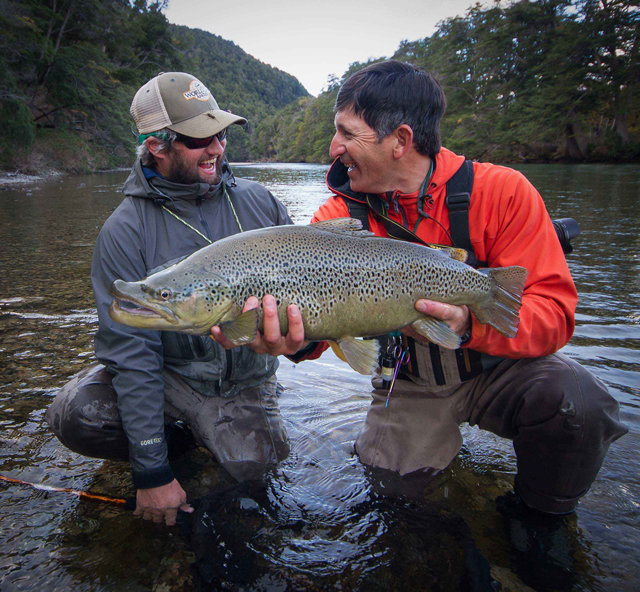 Just look at the shoulders on that thing!

I had not seen the fish, but I felt him eat and set the hook with authority. The fish launched out of the water and landed with a smack and splash similar to a toddler performing a cannon ball. Four letter words spilled out of my mouth as the fish surged for some sunken logs on the river bank. I couldn’t stop the fish with just the pressure I could apply from the reel; I needed more! My choices were to lose the fish in the logs or break it off, so I grabbed the fly line with both hands on the rod grip and applied whatever additional pressure I could. It worked! I was able to turn the monster and maneuver him to the net. 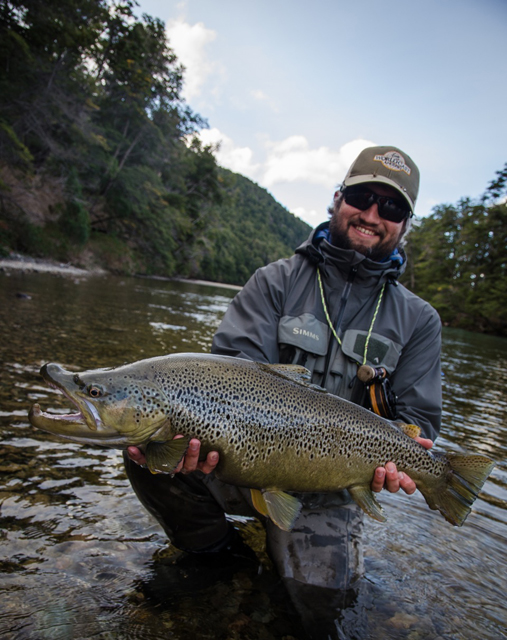 A 22-pound river brown trout is an astonishing catch.

“Hold the tape on its nose,” instructed Esteban to my angling partner, Foster. “I don’t think I want to get my hands near his mouth,” replied Foster with a sense of fear. The trout’s face was mean, not one a mother would love. His mouse consumption had gotten the best of him. We taped the fish, and he measured 29 inches long and broke the 22-pound mark on the scale in the handle of the measure net. The sounds of hysterical laughter, screams, and high fives echoed on the float out of the Rividavia that day; a day never to be forgotten in any of our angling memories. 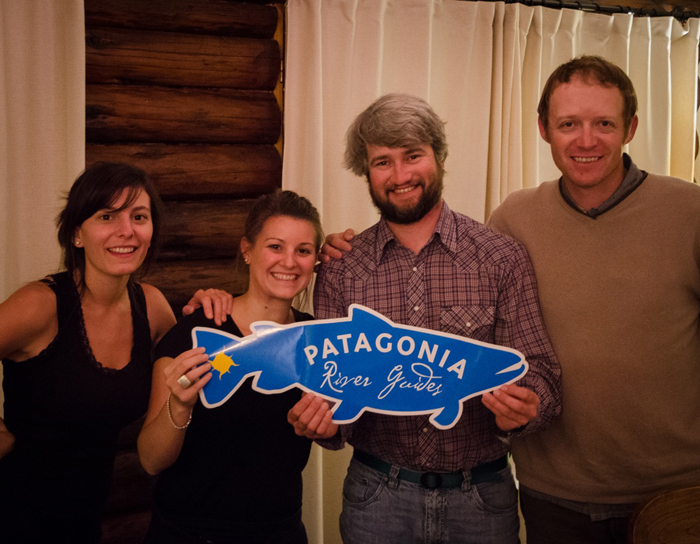 Mike was inducted into the Patagonia River Guides 25-inch Club for his catch.

Mike Dawkins is Vice President of WorldCast Anglers in Victor, Idaho, which partnered with Patagonia River Guides for this journey.

10 thoughts on “Classic Story and Photos: The Mouse-Eating Monster of The Rividavia”