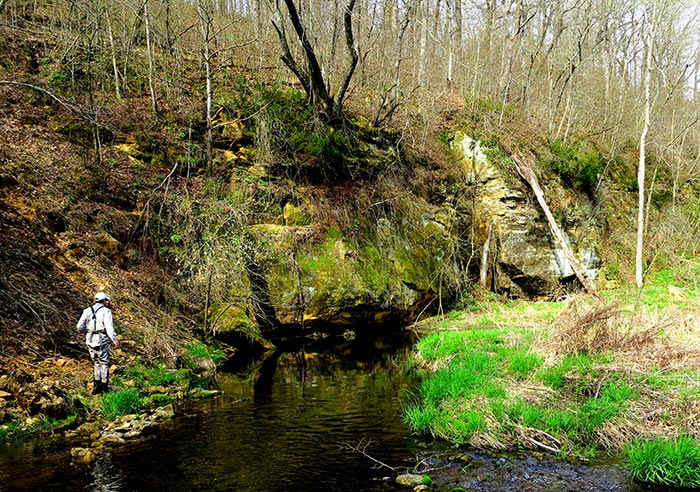 The fish in this hole could not be caught that day, but they provided a lasting memory nonetheless.
Photo by Len Harris, Jr.

My friend, Rob Gooze, and I were way back in the middle of nowhere on the headwaters of one of my favorite streams, when we saw this perfect rock bluff. It was early spring, and the vegetation was just peaking out from its winter hibernation.

The bluff had been created by years upon years of flooding in this valley. The power of mother nature has to be immense to cut through rock like that. We both took it all in before we went forward.

I remember the conditions well. The water temperatures were in the low 50s. The tiny hole below the bluff was at most 18 inches deep, and because the water was so clear, from quite a distance I could see fish moving.

Rob approached the hole carefully, in a crouch position, and tried to entice the inhabitants to bite–with no luck. I took the above photo after he had given up, and we then walked up to see what was in the small indent below the majestic rock.

A small pod of tiny brook trout finned in the current. They numbered less than a dozen, and this was their home. The water above and below was quite shallow, so the trout had to hold tight in their small hole because there was no place for them to go.

These tiny residents of Wisconsin’s Driftless Area were some of the most beautiful brook trout I had ever seen. They were neon colored, and they seemed to glow in their shallow, crystal-clear home.

We smiled after we admired them for a bit, and then moved upstream.

Len Harris, Jr. is a former fly-fishing guide in the Driftless Area. Check out his blog, The Stream of Time.

One thought on “Story: Days Like These Are Why I Fish”