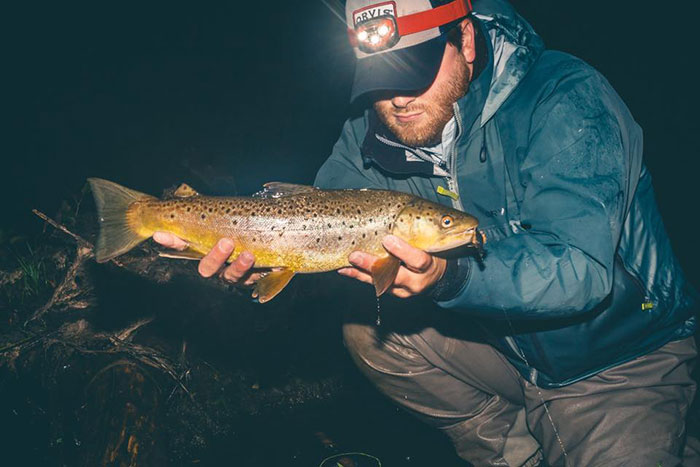 [Editor’s note: Jeff Kolle and I have been friends since the early 90s, when we met in graduate school at the University of New Hampshire. He sent me this evocative email last Thursday, and when I asked him if I could publish it, he graciously agreed. Aside from the removal of a couple of salty words, I’ve barely touched his text at all, since it is such a great read. Sadly, he left his phone/camera in the car, so I’ve illustrated his tale with a couple great shots from Drew Nisbet.]

Went to the [Redacted] River yesterday afternoon. Big yellow stoneflies in the air. First time I’ve ever seen them flying around in that spot. Hooked and lost a (seeming) mega on a yellow stonefly nymph. Caught a few dinks on ants.

I headed for my car at dark, and it looked like it was going to be a full moon. I decided to cut my leader back to 3X, tie on that mouse fly that’s been in that buried fly box forever, and head back out. I even had batteries for an old headlamp.

I waded back out into the water, just below the riffle at the head of the [Redacted] Pool, and began casting blindly. First freaking cast into the darkness–a freight-train strike that I flubbed when I realized that the strike was only about six feet in front of me and I had a line-management failure. Can’t see anything, but I can hear the splashing.

Four or five casts later, twitching the mouse on the surface–WHAM!—a 20 incher, which I landed. These are not delicate takes. These are haven’t-eaten-for-a-month-and-I’m-really-hungry takes. No sipping. Not even gulping. These are fly inhalations.

I had at least a dozen other hook ups, but only landed a few of them, including two around 16 inches. All browns. 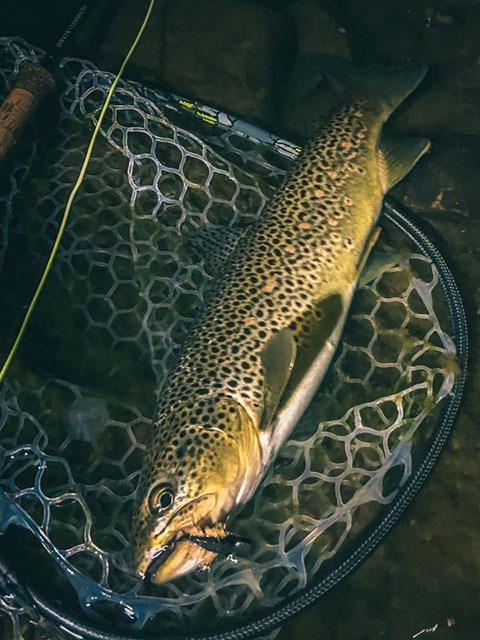 Jeff Kolle’s decision to fish in the dark paid off in spades, as he landed more than a dozen trout.
Photo by Drew Nisbet, Fishing Manager of Orvis Buffalo

The moon came up, and by 9 o’clock, there was moonlight on the pool. At this point, I’m 25 feet off shore. Flow was maybe 150 cfm, so it was easy to get out near the middle. Not too much current. Just as I’m watching, five feet off the left bank–in that slow ripple where most people step into the pool–I see this huge slam on the water. Bigger than a beaver-tail smack, and the water is less than two feet deep there.

Holy crap. Kinda scary. Mega fish. Must be. Never any beavers up this high. Then another slam five feet from me. Then another out in the center of the pool, ten feet away. This all happens in 30 seconds. The fish is circling the pool like Jaws. Eating smaller fish, perhaps.

The mega hit my fly and immediately pulled the rod tip of my 4-weight under the water.

I didn’t have time to wet myself before the fish jerked the line furiously, first this way, then that way, then was gone. The fly was still on the end of my leader.

My knees were shaking. I got out of the water for 10 minutes, smoked a Camel, and considered what had just happened. Man. Eventually, I went back into the water and stayed until 10:45. Hooked up on another half-dozen fish. Landed a few. Nothing big. Not by comparison.

Jeff Kolle is a writer, editor, high-end-stereo aficionado who lives in western Connecticut.

6 thoughts on “Story: How I Learned to Stop Worrying and Love the Mouse”