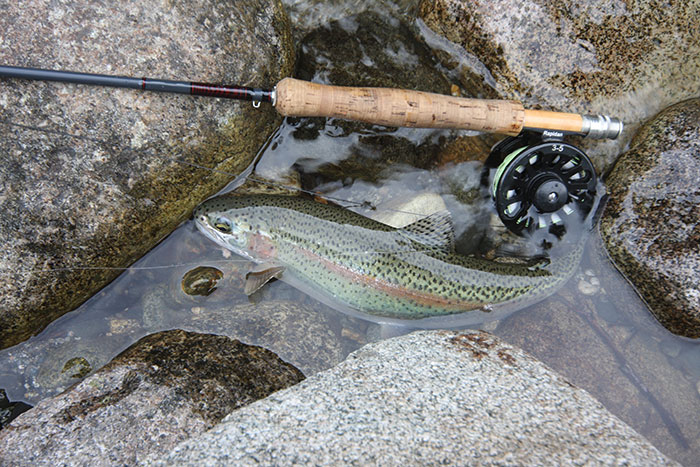 This fish might come up on Jon’s next annual review. . .and not in a good way.
Photo by Jon Tobey

My boss’s Outlook calendar looks like a poorly played game of Tetris, but I finally managed to sneak in a meeting for 3:30 on a Thursday afternoon: “Strategy and Tactics, Oncorhynchus mykiss.” He’s been trying to learn how to fly fish with a rod I gave him last year, and we were long overdue to get on the river and assess his progress. Of course, the meeting got overbooked, and we sat in traffic for 90 minutes to get over the mountain to the local river. I was fuming when we pulled into the parking lot, partly because I didn’t even have time to pick up any beer.

The first thing we did was re-rig his reel, which being a lefty, he had mounted to reel left-handed. Unfortunately, the reel was set up to reel with the right hand. Because he had his reel backward, he had made a mess of the line, and that took me a minute to parse out. Then we were off.

I always go as far upstream as I can in the time allotted, and I happened to know that about a mile upstream was beautiful fish I had caught any number of times last year. I figured we would march up there, and his first fish on a fly rod would be a nice resident ‘bow.

And march we did. I dragged him upstream through briar and bamboo, arriving at our destination sweaty and bloody, but in good time. As I had never seen Ron cast, I stopped just below the run in a little pool so we could make sure that he could get his fly in front of the fish without spooking it. At my suggestion he had gotten a Crystal Flash bugger. This is the fly I fished for my entire first season to good success. Fly fishing is hard enough without the ceremony of changing flies every fifteen minutes. Over the years I’ve progressed, now I also fish Muddlers and Hornbergs, but he wasn’t there yet.

I took his rod from him and was showing him how to shake line into the water to get enough to load the rod and cast. I had less than 15 feet of line in the water and had just said, “Neither God nor fish really cares what your cast looks like; only men do because they can charge you to make it look better,” when to my chagrin, the fish we were targeting came down stream a good 50 feet and proved me right by nailing the splashing bugger. My 15-inch buddy from last summer was now around 17 inches. This is a mammoth fish for this river, which has about one fish this size per mile, and I had poached it right out from under my boss, on his rod, without either of us ever getting a cast out. I would have to say that little episode pretty much sums up my entire career: small successes based on uncanny blunders, which nevertheless seem to backfire.

We fished until dark, and I’d like to say that somehow I redeemed myself by putting him on to another fish, but alas that will have to wait for another day. Ironically, it turns out he is a beautiful natural caster, and didn’t get so much as a wind knot or lose that fly all night. Traditional casts, roll casts, water-loaded casts—he has an uncanny ability to take the fly from here and put it there without thought or wasted motion. None of which is easy on this river. I was learning from him. He didn’t need me at all and would’ve caught that fish just fine without my “help.” It might take a while, but I’ll probably get that beer after all.

One thought on “Story: Mis-Stepping on the Corporate Ladder”