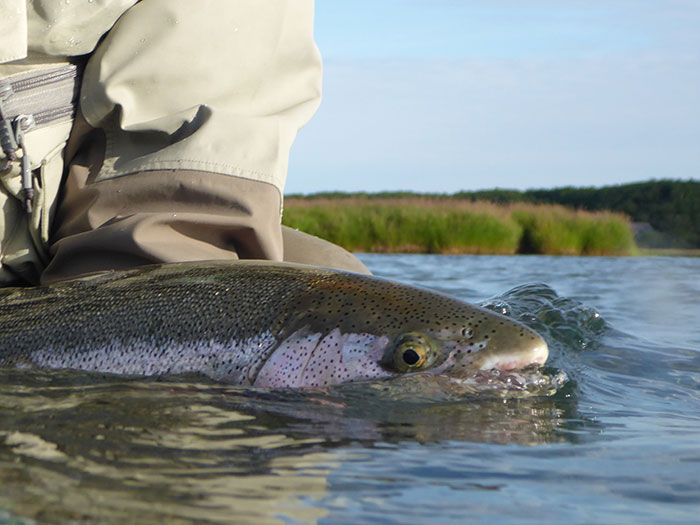 The huge rainbows that Alaska is famous for are not always easy to catch.
All photos by Jeremy Kehrein

In early July 1995, I was guiding two of my favorite clients of all time—a father-and-son team from Annapolis, Maryland—on the Copper River, which drains into Alaska’s Lake Iliamna. Tom and TJ were skillful anglers who loved the sport, but they didn’t take it, or themselves, too seriously. We were near the end of a pretty good day of catching rainbows on leech patterns and sampling Tom’s seemingly endless supply of good cigars, so we were feeling pretty good and ready to go back to the lodge.

As we drifted downstream, we came upon one of my fellow guides, Pete, and his clients loading up their jetboat. When we got close enough, Pete pointed across the river.

“There’s a very nice trout rising right against that grassy bank,” he said, “but he’s playing hard-to-get. We gave up.”

I looked at Tom and TJ, and they were already reaching for their fly rods, so I beached the boat and hopped out. Employing the time-honored “age before beauty” rule, TJ ceded the fish across the river to his father and waded downstream.

As Tom inspected his leader for knots, he and I watched as the big fish resumed its rhythmic feeding. I’d already become accustomed to Tom’s methodical pace. The day before, I’d spotted a gorgeous 25-inch rainbow holding in midcurrent and had called Tom over. He saw the fish and made a whistling sound. Then, to my astonishment, he turned, waded back to the boat, sat on the edge, and lit a cigar.

“Aren’t you gonna cast to that fish?” I asked.

“That trout’s not going anywhere,” he replied, taking out a spool of tippet, “and I want to check my knots and tie on a fresh tippet before I try to land something that big.”

He sat there, smoking his cigar and rebuilding his leader, for a good ten minutes before he got up, waded out, and caught the fish.

As we watched the trout rising against the bank, Tom noted that there were a few small mayflies on the water—an olive-and-rust species neither of us had ever seen before—so we decided to start with a size 18 Blue-winged Olive Comparadun.

After half a dozen drifts, we knew the fly was wrong because the fish didn’t even bother to inspect it. Over the next half hour, we ran through the rest of Tom’s small mayfly patterns—duns, emergers, and unweighted nymphs—to no effect. Instead of getting annoyed or frustrated, however, Tom seemed to become only more interested and focused on the dilemma. It was clear that he had no intention of giving up on this fish, which continued to rise in its maddening rhythm.

Tom’s attitude was contagious, and I rummaged through my vest for a box of patterns I’d used the summer before while guiding on the spring creeks of Paradise Valley, Montana. When he saw how small the flies were, Tom raised his eyebrows. “Never thought I’d be using those in Alaska.”

We’d deduced that the fish was probably eating emergers, taking them right in the surface film. I tied on a size 22 CDC Olive Emerger, and Tom laid down a perfect cast. For the first time, the trout showed real interest, but it still refused the fly. We knew we were on to something.

Tom switched from a 4X to a 6X tippet and cast again. The fish rose, looked hard at the fly, and slid back to the bottom. I rifled through my vest for a second time and came up with a small container of weighting mud. “How about some of this?” I said. We were willing to try anything at that point, so Tom brought in his line, and I squeezed some mud onto the last two feet of his tippet.

On the next cast, the weighted tippet caused the fly to sink a fraction of an inch, and the trout took it. With a big smile, Tom competently played the rainbow and beached it on a small island. At 21 inches, it was a fine trout, but nothing special for Alaska.

I’ve certainly caught bigger rainbows, but that particular trout has a special place in my fishing memories because of the effort and teamwork that went into catching it. And I wasn’t even the one holding the rod.

8 thoughts on “Classic Story: Patience Pays Off in Alaska”