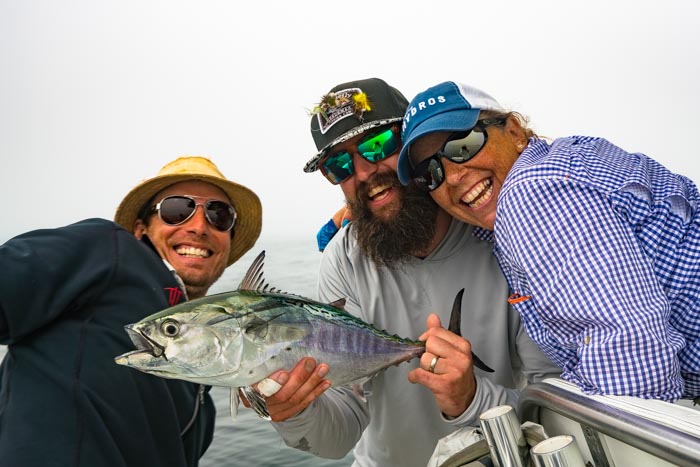 I’ve had a long history with a fish called the little tunny or false albacore. Younger New England fly fishers are amazed that, when I started fly-fishing in salt water in the late 1970s, we did not catch stripers. I’m serious. At that time, striped bass were so scarce that if you even saw one it was a big deal. Full disclosure: for my first edition of The Orvis Fly-Fishing Guide in 1984, I had to ask Spider Andresen of Saltwater Sportsman magazine for a photo; he went to the Menemsha Fish Pier Market on Martha’s Vineyard, “borrowed” a big striped bass, laid it out on the pier alongside a fly rod, and snapped a photo. If you have a first edition of that book, check it out. I swear to you it’s the only fishing photograph I ever faked.

Anyway, I’m making a short story long. The point is that in those days, if you fished with a fly rod in salt water—very few people did, and those that dared risked being laughed off a beach or jetty—you fished for big bluefish from June through November and for false albacore and Atlantic bonito in the fall. Striped bass were a distant dream. And the place to go was Martha’s Vineyard. The guru of fly fishing on the Vineyard was (and still is) a commercial fisherman and bait dealer named Cooper Gilkes III. Those days hold some of my fondest memories, most notably the afternoon Coop and I were very late for one of his family’s famous picnics because we were off Chappaquiddick in a mixed school of bonito and false albacore that just would not quit. They blew up the water chasing bait for three hours straight, and I have no idea how many fish we caught. In those days we didn’t know about epoxy flies or all the other cool stuff we fish today, and we caught all of them on big blue-and-white Deceivers with 60-pound shock tippets. We didn’t yet have fluorocarbon tippets and a big bonito would wear through 20-pound nylon if you didn’t get it in quickly. Albie teeth are small and not so sharp, but bonito have pretty substantial choppers. 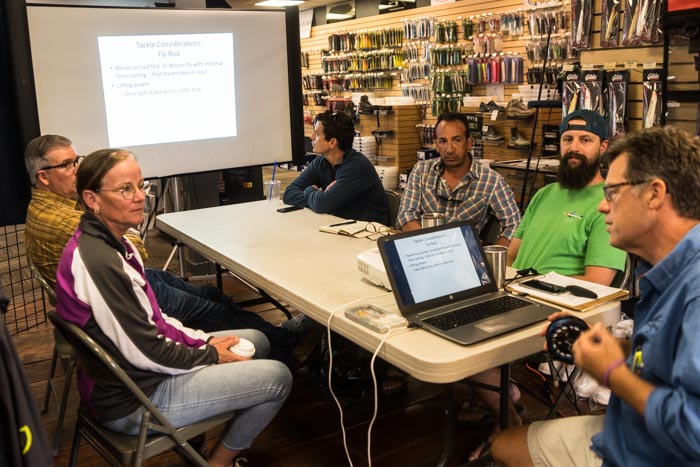 Day One of the Albie School was a classroom session.

Since then, I have chased albies off Cape Cod, Rhode Island, Connecticut, Montauk, in the fabulous waters in North Carolina (where the albies get a lot bigger than our New England populations), and on both the east and west coasts of Florida. Alabama and Louisiana also have great albie fisheries but I have not gotten there yet. Albies and bonito led to a fascination with the Scombrid family, which includes both tunas and mackerel. My obsession with this family of fish so far has tallied Atlantic mackerel, cero mackerel, Spanish mackerel, king mackerel, bluefin tuna, blackfin tuna, yellowfin tuna, skipjack tuna, Pacific bonito, Atlantic bonito, and false albacore. False albacore are perhaps the most fun because they never get too big for a fly rod (unlike other tunas), they are not commercially harvested (they supposedly taste terrible), are incredibly abundant, feed in shallow water at certain times of year, eat very small baitfish perfectly suited for imitation with a fly—and they are much faster than a bonefish when hooked. Once an albie is hooked on a fly rod, your backing will appear before you have time to say, “Holy S#*t!”

Albies live in the Gulf Stream throughout the year, but in late summer and early fall, warm water temperatures and abundant small baitfish bring them into shallow water from the elbow of Cape Cod south to Florida. It’s a flighty situation, though. You can be covered up in fish one day and in the middle of a wasteland the next. Only the albies seem to know why, but they move fast and can be five miles down the coast in a matter of hours.

When Pete Kutzer asked me if I wanted to help him teach an albie school at the Saltwater Edge in Rhode Island with owner Peter Jenkins (himself an albie addict with no sign of being cured), he knew my answer before he even finished the sentence. So off we went to Middletown, Rhode Island, with our fingers crossed for the five people who signed up for this hands-on, personalized school. We spent one day working in a classroom on albie behavior and knots and rigging. I was assigned the rigging section and was horribly embarrassed when it took me three tries to tie an improved blood knot that would not fail. It was a good lesson for the students on always checking their knots, but I think if they ask me to teach next year I’m willing to bet someone else will be assigned the knot class. 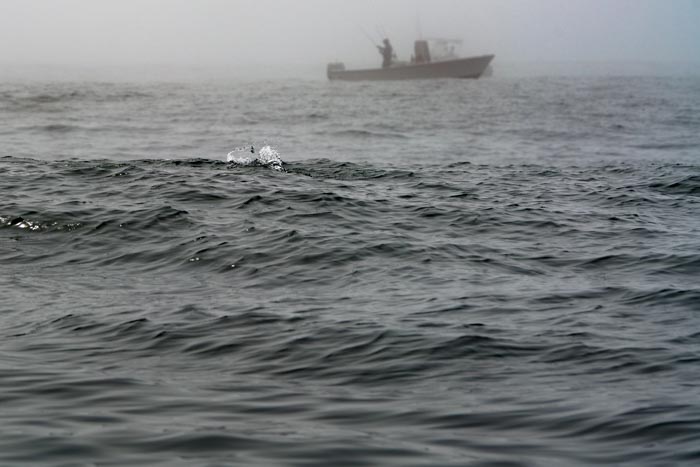 False albacore bust bait on the surface off the coast of Rhode Island.

The second day was our fishing day. Guides Aron Cascone, Rene Letourneau, and Zak Robinson joined us on Saturday morning. I played first mate on Aron’s boat, and I believe it was the first time in my life I was surrounded by albies and never picked up a rod. And I have to tell you it was the most exciting day of albie fishing I’ve ever had—not because the fishing was epic (it was decent and all the students caught at least one fish but the albies, true to form, were being snotty) but because I was able to participate in two people catching their first false albacore on a fly.

We invited Cynthia Harkness, fishing manager at Orvis Dedham, to join Aron, me, and student Morgan Shulda for our fishing day. Morgan got the bow, the prime spot when fly-rod fishing from the boat. I don’t think we’d been on the water more than five minutes when Cynthia hooked up. She had caught stripers and bluefish before but never albies, and I think she was delightfully amazed at how much backing her first albie screamed from the reel, and how hard it fought, right to the boat. Once we got her fish safely on board, there were lots of smiles and hugs. I think she told Aron she loved him.

Now it was Morgan’s turn. Aron and I turned our attention to him. Morgan’s an experienced trout angler and a great caster. He was controlling his line perfectly, and was stripping at just the right speed (which for these albies was a slow, steady retrieve, contrary to the fast strips most people use for them.). As Peter Jenkins kept reminding us the day before, “Albies swim fast and the inclination is to match that speed. But young-of-the-year bay anchovies are just over an inch long and don’t swim very fast, so it’s smarter to match the speed of the bait than the predators.” 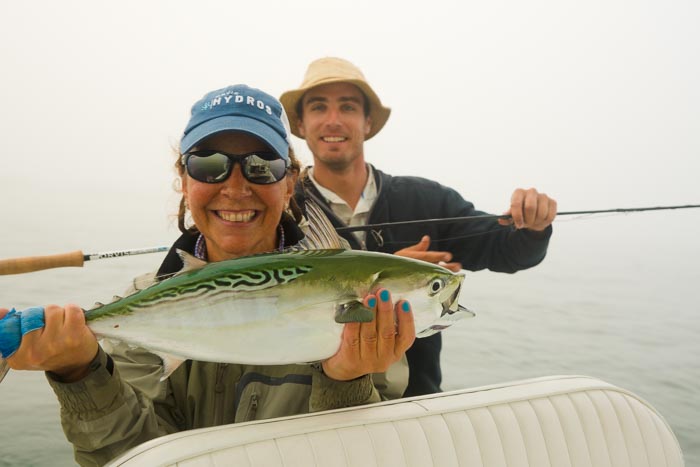 Cynthia Harkness, fishing manager at Orvis Dedham, tore them up on Day Two.

A yell from the back of the boat swiveled our attention to Cynthia. She was hooked up again, and she landed the fish. We again returned our attention to Morgan in the bow, who at this point was retaining his composure, but we could see his shoulders slumping just a bit. A bunch of albies blew up right next to the boat, Morgan make a pinpoint cast to them, and immediately hooked up. Then the tippet broke. I had seen the whole thing—he didn’t strike (you really do not need to set the hook on albies) and did everything perfectly. It was just one of those random things. We tested his tippet, Aron tied on a new fly, and back at it he went. A few minutes later, he hooked up again, and the fish just came loose. The fly popped out. It happens all the time. His shoulders slumped a little lower.

Aron and I kept our attention on Morgan when we heard commotion from the back of the boat “Uh, guys, I think I need some help back here if you have a minute” Cynthia was hooked up again. Morgan’s shoulders drooped a little lower. We landed her third fish.

After dealing with Cynthia’s fish we turned our attention once again to Morgan, who was still casting beautifully. He hooked an albie. The tippet broke, this time in the middle of the tippet and for no particular reason we could see. Aron replaced his entire tippet from another spool—just in case. Morgan got back at it. Aron, Morgan, and I were discussing the uncertainties and randomness of albie fishing when a voice from the back of the boat said “Hey Chatty Cathies, when you get done up there I have another fish.” Aron and I weren’t quite ready to throw Cynthia overboard, but we seriously considered cutting the point off her next fly without telling her. 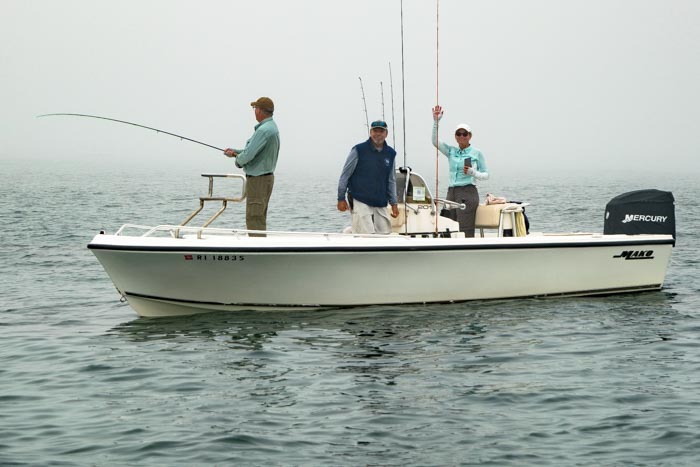 One of the other boats from the school celebrates a hook-up.

Morgan hooked up again. Aron, Cynthia and I stood behind him, with silent glances to each other that signaled hope, anxiety, and maybe prayers, if that’s the kind of thing worthy of invocations. Aron and I gave Morgan way too much advice on playing the fish. It’s hard to resist when you have so much emotional stock in a single fish. At one point, the fish sounded early in the battle, unlike an albie and more like something else. I looked at Aron and mouthed bass? And his face reflected maybe, but I sure as hell hope not. But then the rod signaled that snare-drum cadence of a pulsing albie tail, and we relaxed.

We babied that fish. We finally saw color in the water, and the fish got closer and shallower, doing that final albie dance: I’m ready. I’m tired. No I’m not. I think I’ll dive under the boat. Now I’ll dash away from the boat. Look at that person dancing around above me. I’m really tired. No wait I’m not. I’ll try sounding and swimming in circles. The typical drill for landing one of these fish is to carefully grab the 16-pound leader, relaxing all pressure from the rod, and swirling the fish back and forth until its tail gets close to the surface, at which point you make a firm grab for the wrist between the sickle tail and the body. But sometimes the tippet breaks when the fish makes a dash. Or the hook just pops out from the frequent changes in direction that work the fly loose. 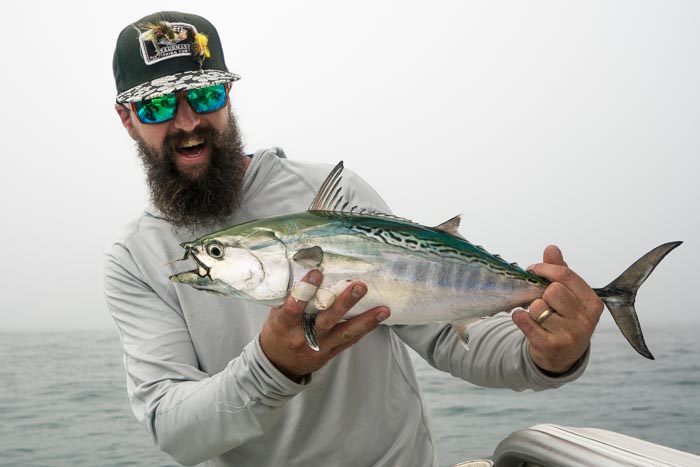 That is a smile of victory, as Morgan enjoys success after multiple failures.

“I’m not messing around; where’s my net?” Aron said as he dug into a hatch. “I haven’t netted an albie in years, but I am not taking any chances.” We waited for just the right moment and Aron made a perfect swipe and Morgan’s fish was in our possession. No one made a sound for about a second. Then the boat erupted with screams and the sound of people jumping up and down on the deck.

I am not sure what it sounded like to the scores of boats around us in the fog but I’ll bet someone considered calling the Coast Guard.

One thought on “Story and Photos: Going to Albie School”