The first brook trout I ever saw was about three inches long, little bigger than a baitfish really. But the memory of that vision—of that glittering flash of color and light—remains sharply etched in my mind more than forty years later.

I was about nine years old, floating down the Saco River in New Hampshire in an old, beat-up rowboat. My older brother Brian, the serious fisherman of the family, stood in the bow, casting his fly behind every boulder and into every eddy, all his concentration focused on the end of his line. I was the bored passenger in the stern, aimlessly chucking a Mepp’s Black Fury behind the boat, daydreaming as I watched the mud swallows dart in and out of their holes in the high river bank.

Neither of us had caught anything all day, if you don’t count my many snags, and we were nearing our take-out. I cast one more time and began reeling like a madman because I couldn’t wait to head in. But as soon as I lifted the flashing black-and-gold spinner out of the water for the last time, the little trout appeared behind it—materializing, it seemed, out of thin air. After a valiant leap for a lure that was half its size, the fish disappeared the second it hit the water.

Working upstream with a dry fly, in search of natives,  can make time seem to stand still.
Photo by Tom Rosenbauer

The whole event couldn’t have lasted more than a tenth of a second, but I sat there mesmerized, not sure if what I’d seen was real. I felt as if I’d come in contact with something remarkable, something that contrasted sharply with the materiality of my childhood world. On that summer afternoon, everything felt so concrete—the hard metal seat of the boat, the air heavy with heat and humidity, even the mirrored surface of the water. But the trout was pure light and motion, capable of breaking through the barrier of its own element to fly through the air. Though at the time I didn’t really understand why, I knew that I’d glimpsed something special.

When I try to trace my lifelong love of trout and the rivers they inhabit, I always end up back at that first, brief encounter. That summer, I became a trout fisherman–although it took another decade before I took up a fly rod. And even though I’ve worked as a guide in Alaska, where I caught rainbows beyond my wildest dreams, and on some of the most famous trout rivers in Montana, I’ve always really been a brook trout fisherman. In fact, despite the monster cutthroats and browns I caught during my time in Montana, the fish that most excited me was a 17-inch brookie I caught float-tubing in a small pond in Yellowstone National Park. 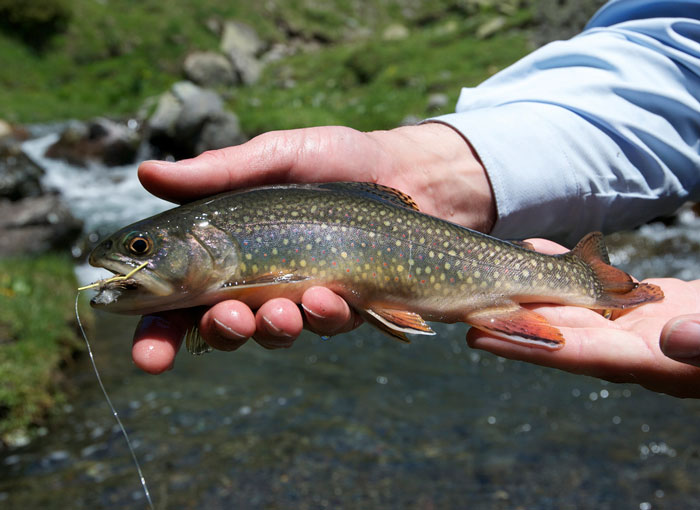 This gorgeous wild fish was caught in the Spanish Pyrenees, far from its native range.
Photo by Sandy Hays

I’m lucky enough now to live in a place where streams full of native brook trout flow out of the mountains all around me, and I can indulge my passion for Salvelinus fontinalis at will. Casting a dry fly while wet-wading on a mountain brook trout stream is heaven for me. I can get lost in the rhythm of working from pool to pool, covering the water, and trying to make accurate casts and good drifts. I sometimes completely lose track of time, though, which can get me in trouble.

And that moment when a trout smashes the bug is always a thrill, even if it’s the twentieth time that day. Finally, holding a brightly colored brookie—with its brilliant reds and blues—completes the experience. You just can’t escape your first love.

6 thoughts on “Story and Photos: You Never Forget Your First Love”