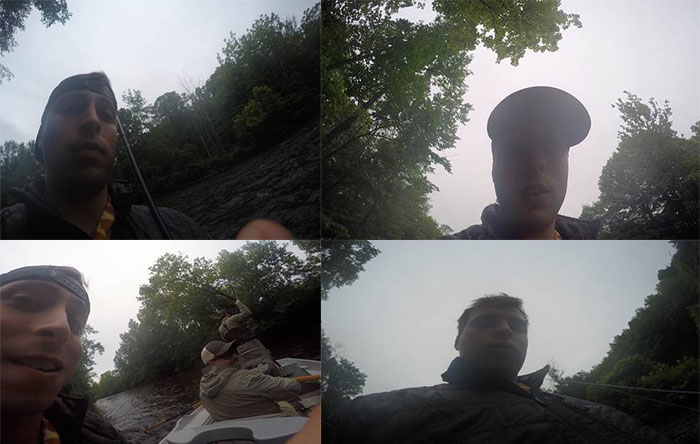 Jared’s “hero shots” were really “dumbass selfies,” much to his chagrin.
Photos by Jared Zissu

My redemption trip to the Battenkill began at 3:30 this morning. (Read about my previous Battenkill failure story.) Rolling out of bed after a solid three hours of rest, I fumbled around for my headlamp and strapped it over my nappy head. The 45-minute trek to the river wound down through the foggy Green Mountains, and like a good intern, I was the first one at the meeting place.

As Shawn turned into the dark pull-off to join me,  a reckless Jeep swiped the back of the Adipose drift boat trailing behind Shawn’s truck. This should make for an interesting morning, I thought. The driver stumbled out of the Jeep with his eyes bulging wide, introduced himself as Jerry, and apologized profusely. Everything was okay, though, and after a few parting words and a quick boat inspection, Jerry made his way down the road.

Our colleague Sam Orvis arrived next, and he seemed to have slept in his waders the night before in anticipation for the early morning departure. As Shawn lowered the boat near the water, I could feel the excitement building. I was about to have my redemption on the Battenkill, and it was going to be sweet.

Being the social-media intern, I always have my camera with me. The new GoPro Hero 4 was going to do the trick this morning. Sam took the bow, and we began chucking some meat as Shawn eased us into the current. “Left side, hit this bank,” Shawn ordered as we drifted swiftly down river.

Sam was the first one to hook up, when a nice, healthy brown bent his rod. As the intern on the boat, I figured this was a golden opportunity to get some footage of the guys in action. Shawn gave Sam a few instructions and then gently netted the beastly brown with professional poise. “Don’t worry guys. I have it all on film, and this is some epic stuff,” I proclaimed.  Sam hoisted up his biggest brown to date and held it up to the camera. This was the Hero shot.

As the morning progressed, Shawn continued to maneuver us through the winding terrain. I had a few big flashes and follows but no hookups. This was not going to be my day. . .again. Sam was on fire and hooked up on two more beautiful fish.

Although slightly disappointed, I felt satisfied with the camera work I had done. I figured they’d say, Hey, the intern didn’t catch any fish, but at least he took some decent videos for us. When I pulled into work this morning at 7:30, I walked quickly upstairs. I could tell Sam was eager to see the footage from his most epic day on the Battenkill. I hooked my GoPro into the computer and eagerly awaitied the upload.

This is when I realized the Battenkill had won again. Not only did I not catch any fish, but the Battenkill was now going to embarrass me in front of the office, too.  My GoPro had been set on “picture” mode from my previous trip. Each time I had begun “recording,” I was actually just taking a picture of my face. I had five horrible selfies uploaded onto the computer. No hero shot, not even a glimpse of the three great fish. I broke the news to Sam and Shawn and crawled back to my intern cubicle.

I will have my revenge.

Jared Zissu is the Orvis Social Media intern. He’s also the mind behind Flylords on vimeo.

2 thoughts on “Story: Summer Intern Seeks Redemption on the Battenkill”