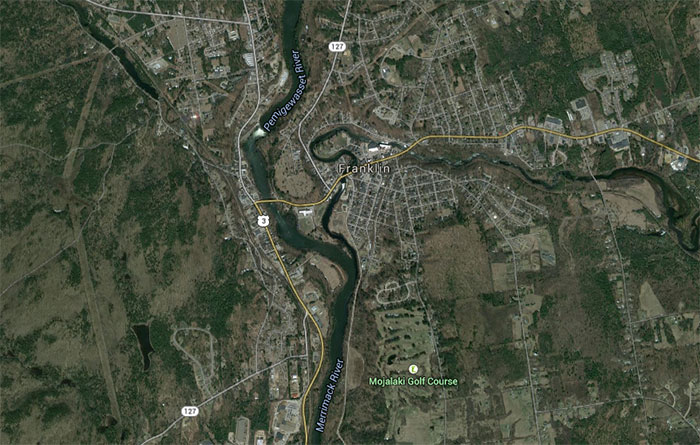 The Pemigewasset (left) and the Winnipesaukee (right), join to form the Merrimack River in Crotchtown.
Photo courtesy Google Maps

[Editor’s Note: Jon Tobey is an old friend, from summers spent on the New Hampshire seacoast in the mid 1980s, but we lost touch for, oh, 25 years. I was perusing an issue of The Flyfish Journal, when I saw his name on the Contributors page, and we reconnected via Facebook. His blog gointothelight is an interesting collection of fishing stories, photography and musings. Here’s a fun tale of a trip home to the Granite State from Jon’s home in Seattle.]

Last summer, I made my annual trip home for the 4th of July. My parents recently moved to Franklin, New Hampshire—once called “Crotch Town” because two rivers, the Pemigewasset and Winnipesaukee, join here to make the mighty Merrimack, once the engine of the Northeast textile industry. This move has proved pretty ideal for me because all of these rivers contain fish, and when I’m home I generally get as much fishing in as possible, in direct proportion to how little I am currently fishing in Washington. Once, I even wet-waded Punch Brook in fresh snow on New Year’s Day just to check if fish had pushed up from the main stem during high water.

When I got there, North Country had recently received a whopping 7 inches of rain. The Pemi starts up high, right at the base of what was once The Old Man on the Mountain, so the river runs the length of the state. Even though it is dam controlled, the Pemi was high and muddy when I arrived. The first time I ever fished that river, I met some paramedics were walking out with a body as I was walking in, so I’ve always had a pretty high respect for it. Wading it in “normal” conditions is a bit of a scare, and wading in flood stages was out of the question.

I thought that maybe with the high water the fish might’ve pushed around the corner to the Winnipesaukee, a much shorter river coming from an eponymous lake just a few miles away. So I went to the boat ramp behind the high school, and sure enough, I could see trout cruising in there. This water is also dam-controlled. (You can see the dam outflows as white on the above.) I waded some of it, but it looked as though it would be nice to put a boat in there. My suspicions were confirmed when a couple of good ol’ boys showed up and told me that indeed they often caught 50 fish or so in the quarter mile between there in the dam.

The bridge pilings (3) provided a casting platform for dredging the seam (red line) on the Winnipesaukee.
Photo and mad PhotoShop skillz by Jon Tobey

Getting skunked there, I decided to drive upstream to the wildest place on the river, thinking that in the heat the fish might’ve collected in the whitewater. Here too, the water was too deep to wade inside the stream to a good casting location (4) . So I crossed the road, waded out on the pilings of an old bridge (3) and threw my line into the heavy water, casting upstream and stripping line off the reel, so that it would swing and get dragged to the outside of the seam below me (red line). It took a while—I had to get it just right, casting to the far shore, mending, and then ripping line off as fast as I could—but sure enough, I hooked up with a rainbow the size of my forearm between the outside of the seam and the road, and was able to walk him into the slack water to land him. Fish on, skunk off.

My nephew, Gabriel, whom I hadn’t seen in 5 years or so, was in town, and he, my mom, my sister, and I headed north for a day. He and I hiked the Flume gorge, which comes into the Pemi, and then fished the Pemi just below the intersection. We hooked a few 4-inch brookies and scared away a few more respectable fish. Then we went to my favorite secret spot by Waterville, where he and I once hooked something like seven fish in ten minutes, but the rains had flushed them out of there, as well. Just as I was finally figuring out where they might be, we were out of time.

The Flume is a natural granite gorge in northern New Hampshire.
Photo via nhdfl.org

On my final day in town, I skipped dinner, grabbed my gear, and headed out for what I knew was my last chance. Unfortunately, I left so fast that I left my waders at home. At first I went to the Franklin Falls Dam because the state record trout (a 35.5-inch monster) came out of the lake below it, but there was no wade-in access.

So I went back to town and decided to wade the main stem. Well, it was still a bit high and a bit fast. I emptied my pockets and decided to go for it, wading over my waist in the fast, steep section I could access. Theoretically, not having waders should’ve made me feel safer, but in practice, it did not. The water was so fast that I had to wade out to an outcropping and then turn and fish back toward shore. Even though I was midriver, I was able to fish inside the seam.

The first fish I pulled out was, I think, a redhorse. It was an easy two pounds and fought well. Originally I was so focused, I just assumed it was a local whitefish—of which from that spot I have caught many—and released it without thinking. Only later did I realize that color, shape, and mouth-wise, that fish was like none other I had ever caught. It was my dad who suggested it might be a redhorse, and although the images did fit the bill, it took a bit of research to find any references of them this far north. (NH Fish and Game has no idea they are in the state.) It’s a coarse fish, but apparently some people catch them on purpose, like bass.

After that, I took a nice 12-inch brown trout and a smallmouth bass. It was getting late, dark, cold, and rainy so I decided to dedicate the rest of my evening to cribbage and Scotch with my dad. However, as is often the case, the wade back was much worse than the wade in. The dark did not help. In desperation, I let all of my line out downstream, well into the backing. The drag of all of the line in the heavy water gave me something to counterbalance against in the current, the way that sometimes even holding on to a twig will help. It turns out, I was able to put considerable force on this “sea anchor” and it saved me a couple of times.

Finally, I got within a yard of the bank and started reeling it in. I was surprised at the amount of effort it took to pull that little muddler in! The rod had a significant bend in it. Until finally, at the end there was my line with a 10-inch brookie held fast to it. In that water, I had worked him too hard, so I had to hold him in my hands until full dark for him to resuscitate, apologizing the entire time. Then, after finally achieving the holy triumvirate of a rainbow, a brown, and a brookie, I scrambled up the rip-rap to some dry clothes and the trip home.